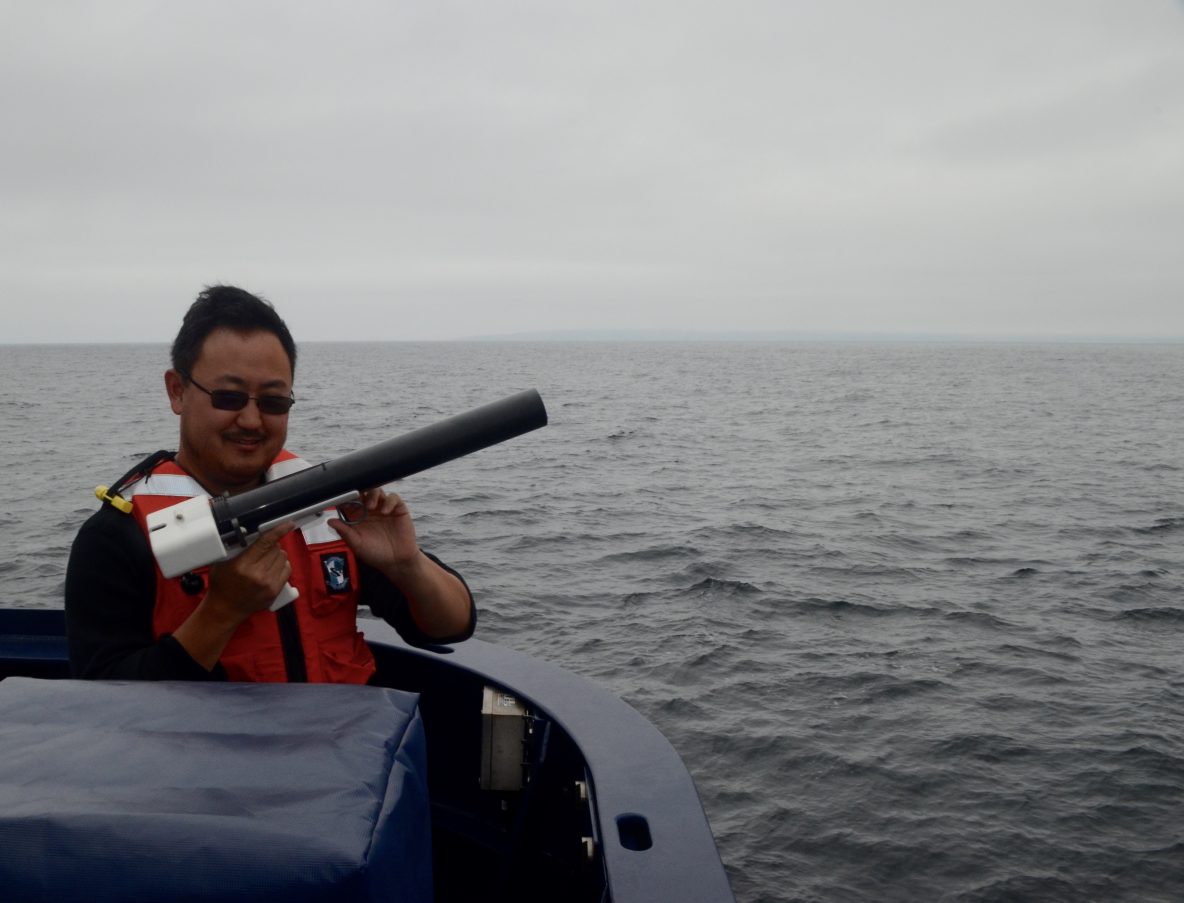 “Yeah, it’s one big adventure, to travel the world, that’s cool and all – but the rewarding aspect I didn’t know until later was seeing the research I assisted with on the news. I felt proud to be part of something greater.”

Computer tech Daniel can often be found near the main lab’s wall of monitors,
keeping an eye on the countless systems he’s in charge of maintaining.
Photo by ROV tech Doug Penny.

Daniel Yang first started working for Shipboard Technical Support at SIO as an undergraduate student, programming applications for the Oceanographic Data Facility. Later he became one of the department’s Computing Resources (CR) technicians and in the last ten years has traveled around the world on Scripps research vessels, spending anywhere from a few days to a few months away from home. The techs are in charge of making sure everything digital onboard is working, including data collection and processing from all the sensors onboard. There are also ship networks to maintain, servers that the scientists use to share information. You’ve seen pictures of R/V Sally Ride’s “wall of monitors” in other posts – fifteen screens all showing readouts from different instruments  – and the CR techs are in charge of keeping them all up and running.

Along with the resident technicians (restechs, see intro in a previous blog post here), the CR techs act as a liaison between the scientists and crew. No matter what the science objectives, every research cruise on R/V Sally Ride requires setup, tracking, and assistance from the computer techs. The coring group needed singlebeam echo sounder data to reliably collect sediment samples, the ROV group used an acoustic positioning system to track the submersible’s location, and many trips require CTD sensor data and bottle samples. In addition, there are many systems that run by default unless they interfere with primary science operations, like the seafloor mapping system and current profiler. Daniel works with the scientists in advance to make sure their needs will be met. “What the scientists want versus reality can be challenge, but we always try to accommodate the science,” he says, adding with a smile “We can’t break the laws of physics, but sometimes we’re asked to.” And if nothing else, no one can function without internet access these days, and Daniel is in charge of keeping that running as well.

Daniel gears up to climb the mast of R/V Roger Revelle to make repairs.

But he’s much more than just an at-sea IT guy. Daniel has had standard desk jobs in the past, and says “I probably wouldn’t want to go back to that. No, I don’t think I could sit in one place.” Trouble-shooting equipment on a research vessel can be “like a stair master when things go wrong,” he tells me, as there’s gear on every deck of the ship, not to mention up the three-story masts. The computer techs are also in charge of launching XBTs (eXpendable BathyThermographs), temperature probes used to determine the speed of sound in seawater, which can vary due to many factors and are needed to calibrate measurements made by onboard and deployed instrumentation. For this, Daniel dons the work vest necessary for any operation involving something placed over the side of the ship and makes his way to the fantail. For some reason, it seems to be tradition to prank a new scientist into helping with an XBT deployment and telling them how dangerous it is, loading them up with unnecessary protective equipment (see Twitter picture below).

There is often only one computer tech on a research cruise, which means they may be called for assistance at any hour of the day. Without the routine of a work shift, Daniel adapts his hours to when he is likely to be needed. But that doesn’t mean he won’t get a call right after he’s hit an REM cycle or just gotten to the best part of a movie or book.

Daniel launches an XBT off the fantail of R/V Sally Ride.

Though it’s more likely to be interrupted, Daniel lists the same downtime activities that the other techs and crew members have mentioned in their interviews. “I read a lot of books, watch movies, rinse, repeat, eat, workout, that’s about it.” He also gets asked to help people with their personal computers, and is ready to help. It’s always good to be known as a helpful person and to make friends with the crew. “We’re stuck with each other for a month or more at a time, so it’s good to help each other out.”

When asked what he would recommend for people who are interested in a job like his, he says “Practice being handy, even if you’re a programmer, knowing some basic things like soldering, hands-on stuff away from the keyboard, maybe build an RC car. Those skills really do come into play out at sea.” On one trip aboard SIO’s R/V Roger Revelle, the MET sensor stopped working. Short for Molecular Electronic Transducers, the gyroscopes, tilt sensors, and accelerometers are vital to both crew and science missions. Their location on the ship’s mast makes troubleshooting quite an undertaking. Daniel geared up with safety equipment, including a harness and hard hat, and made the climb. It turned out to be a short in the wire, which he cleaned up with a pencil eraser and then repaired – all while about nine stories above the ocean surface, in the middle of nowhere.

Having a brand new ship to set up and work with has been exciting for everyone at Scripps, but especially the technicians who are expected to know everything about keeping a research vessel running. R/V Sally Ride is now a passion project for those of us lucky enough to have been involved from the beginning, and one that Daniel is excited to be a part of for a long time coming.

“The ship is the most advanced in the world, and I really want to keep it that way.”

See more from Daniel at the R/V Sally Ride gallery at Birch Aquarium’s Explorations at Sea exhibit! Thanks to aquarium staff for the interview, taken for the “Meet the Crew” feature.