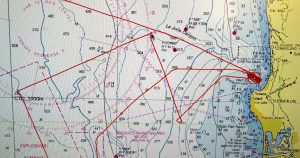 Chart of the work area along the contours of the La Jolla Canyon. Deep station marked with a
triangle on the left, intermediate with cursor in center, and ship icon on shallow station.

There’s a lot of different groups of Scripps scientists onboard R/V Sally Ride this week, all vying to get their science objectives done. One of the groups has been here before. Back in December, grad student Maddie Hamann was chief scientist of a three day cruise recovering moorings and doing CTD surveys to study internal tides around the La Jolla Canyon. Click here to check out the blog post with more details. 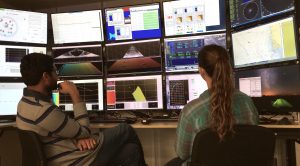 Graduate students Susheel and Maddie monitor the CTD casts
from the main lab.

Maddie and other members of Dr. Matthew Alford’s lab are back and have run two nights worth of CTD yo-yos, 12.5 hour operations where the CTD and other sensors on the frame are lowered to within a few meters of the seafloor, then brought back to a few meters below the surface, over and over again. The first night was a deep station, about 20 nautical miles offshore in 1,000 meters of water. Twenty-two round trips were made with the CTD. The second night was an intermediate station, this time 10nm out, with 29 roundtrips in 700 meters of water.

The multibeam sonars were left running while on station and the CTD rosette itself showed up on the water column view. On the screenshot below, picture the ship at the top of the triangle, with the grayscale underneath mapping the intensity of the return signal from pings sent out. The red line approximates the seafloor. The cone directly under the ship is the most clear, with the wedges to either side being slightly skewed due to the angle. And right in the middle of the screen is the CTD package, glowing like a UFO. 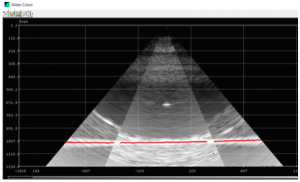 Screenshot of the multibeam water column view. x-axis is meters to port and starboard of the ship’s keel; y-axis is depth in meters.
The CTD package shows up as a bright spot at around 680 meters depth, right in the middle of the screen. 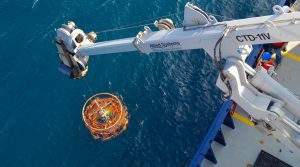 The CTD is deployed over the starboard side of R/V Sally Ride.

There’s not much to do but watch the data plot for 12.5 hours each night, so the unexpected ability to track the CTD’s progress on the multibeam screen added a bit of intrigue to an otherwise dull experience. Both the scientists watching screens in the lab and the crew running the winch work in shifts, so that no one gets sleepy or bored. The Alford lab has gained two nights worth of data collected from the CTD and ADCP on the rosette frame, along with multibeam maps, which they will use to understand how the shape of La Jolla Canyon affects internal waves bringing nutrient-rich water into the cove.