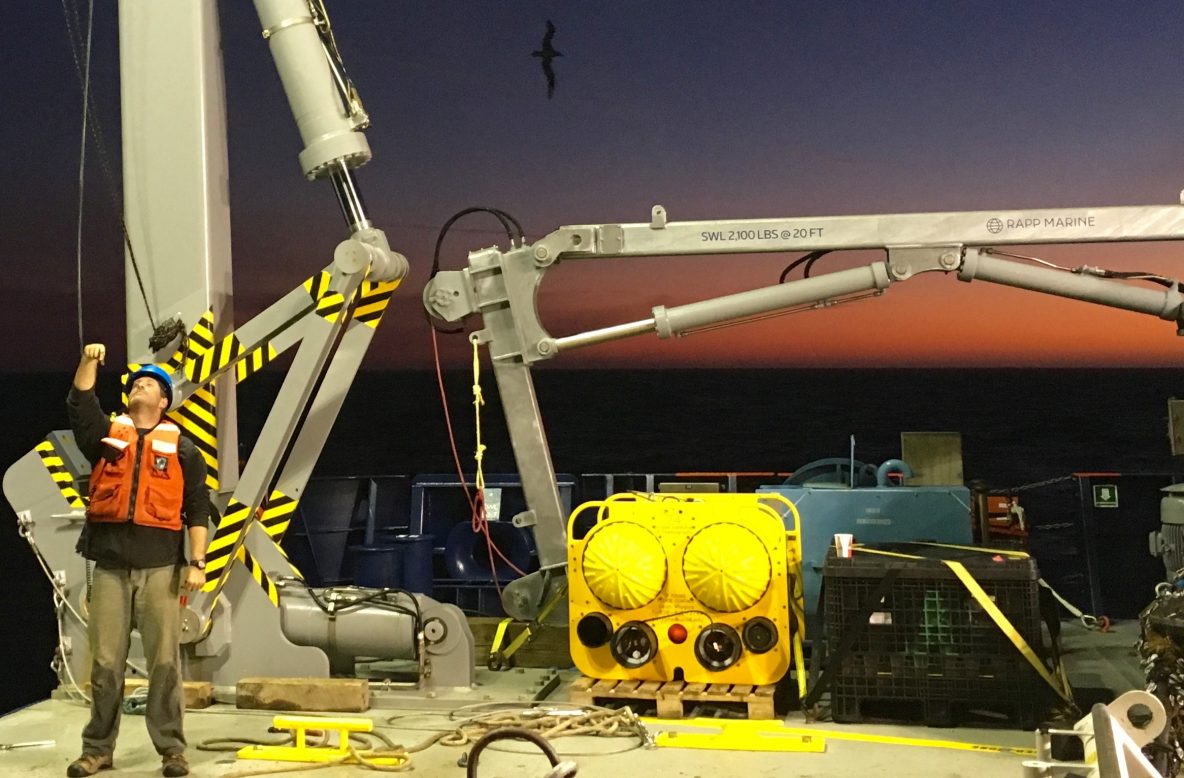 “I get to work with the world’s smartest people, the top scientists. I ask a lot of questions, I try to learn what they’re doing just for my own insight. These are the professors I could have taken grad school classes from. Over dinner I can learn the grand scheme, the big picture, over a napkin instead of a textbook. That’s all I need.”

R/V Sally Ride off the coast of Matt’s hometown of Santa Barbara for a science personnel transfer.

Resident marine technician (restech) Matt Durham is one of those people that has always been ocean-minded. R/V Sally Ride pulled in close to his hometown of Santa Barbara a few days ago, bringing him back to the place where, “…I grew up splashing in the ocean, got tar on my feet, cruised around the tidepools. Except for one year of my life (in Lake Tahoe), I’ve never lived more than five miles from the coast.” 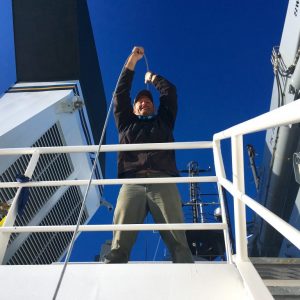 As part of his duties to make sure both science goals and ship’s capabilities are considered, Matt runs cable from the starboard side handling system to the stern A-frame.

His first job after moving to San Diego after college was as a dive master, taking tourists out for scuba trips in La Jolla Cove. “At some point during all that hard work, you find yourself underwater – breathing, flying in three dimensions, cruising around with critters that most people never get to see in real life. Makes it all worth it.” Now he dives on vacation before and after research cruises all over the world.

Matt also had a short-lived job in a lab at the Scripps Research Institute (an unaffiliated biomedical
company also founded by Ellen Browning Scripps). “It was an indoor job, and I’m an outdoor cat.” Soon after, he interviewed for a restech position and has been part of the group for almost ten years now. The job at SIO has turned Matt into a seasoned traveler. He’s now been to more countries than states. Work has taken him to all seven continents, though he’s claiming eight now that Zealandia has been “discovered.” The restech group works on Scripps research vessels, but occasionally they get sent out on other cruises. Matt recently went to Antarctica on the US Antarctic Program’s icebreaker Nathaniel B. Palmer, and he’s been to the Arctic on the US Coast Guard icebreaker Healy. 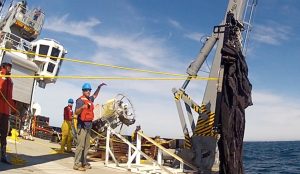 As part of running deck operations, Matt gives hand signals to the winch operator, ensures the equipment is secure, and everyone is safe.

The restech group consists of technicians that bridge the gap between the ship’s crew and science party. No one knows better the limits and uses of all the ship’s equipment better than its crew, while the scientists are often focused on their goals. Being the line of communication between the two is the restech’s main job, one that is necessary to formulate and execute a plan that is compatible and safe. Sometimes there’s two restechs, each working a 12-hour shift to cover operations. But often they go out solo, in which case Matt tells the science party “I can work any hour of the day, but not all the hours of the day.” There’s always some newbies onboard, and every operation is different. From setting up the CTD to handling tag lines to tying knots, Matt begins each trip by making sure the scientists are ready to work on deck. By the end of the trip, he says, “People may think my job looks easy, and that means I did a good job getting everyone trained – when we’re running like a well-oiled machine, everybody’s staying safe.” 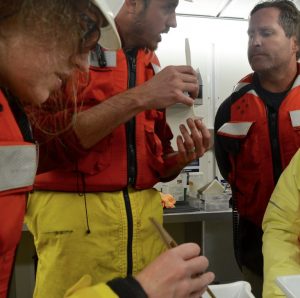 After a successful net recovery, Matt (right) stops by the wet lab to learn about the samples that scientists collected.

Matt’s ability to take a step back from any situation and see things from all angles is clutch at work. Running deck operations requires him to know where all the moving parts are – people, equipment, potential hazards. That situational awareness is part of his personality to begin with, and it makes him good at his job, which then feeds back into his personal life. From understanding other people’s politics to getting the crew and science party to understand each other’s goals and limitations. “From ship to life, it’s important to understand different perspectives.” Click to see a 360 view of Matt running the deck during a mooring deployment. You can always find the restech in photos because they’re giving hand signals.

Marine technicians work hard and have to make sacrifices for the job. On average, Matt spends roughly 1/3 of the year away from the comforts of home. He laments time away from friends, family, surfing, snowboarding, and riding his bike. “Every once in awhile when I’m laying in my bunk and it’s been a rough day, I wonder if maybe I’d prefer a ‘normal’ job. I start thinking about what that job would be…wearing nice slacks, collared shirts, a tie, driving a fancy car to work every day at 7am and doing that forever. And ever. And ever. And then I say, ‘I’ll get back on a boat.’” That’s a sentiment many marine technicians share – despite the sacrifices, the missed events, the time away, we keep coming back.