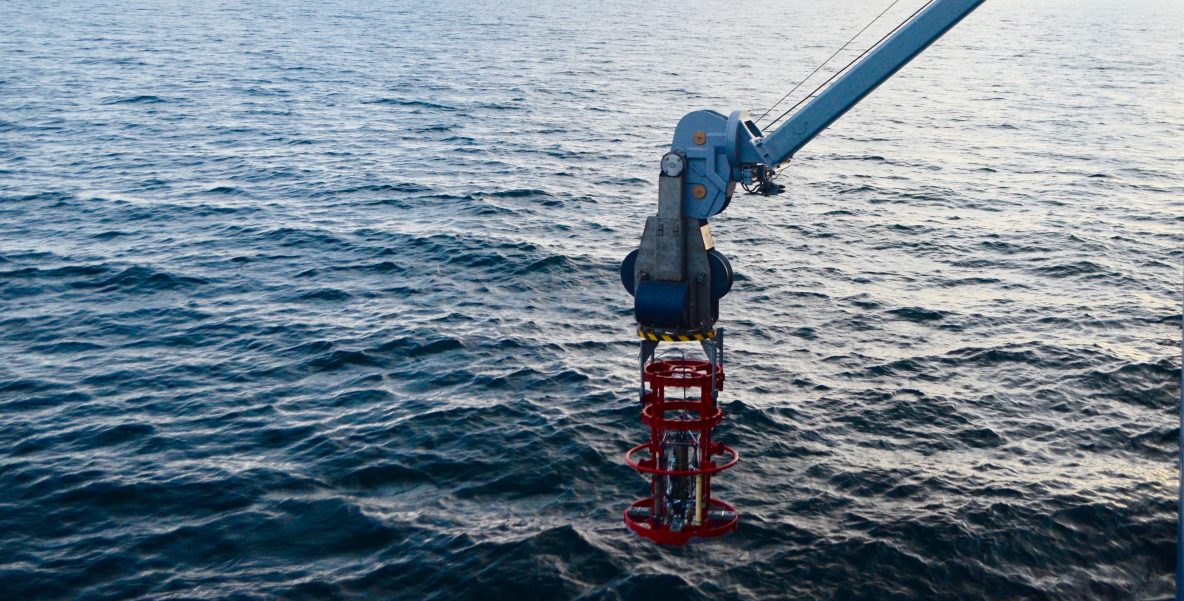 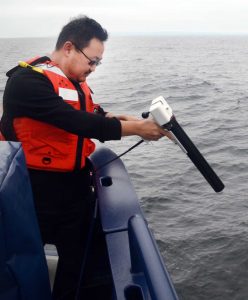 XBTs are deployed from the back corner of the ship
while underway.

A sound velocity profile is helpful for calibrating instruments that rely on a ping sent from a source that reflects back to that source’s location. In some cases, it’s enough to assume sound travels through seawater at 1500 meters per second. However, there are many exceptions and an accurate profile of the water column can shift data points from other instruments significantly. Pressure, temperature, and salinity are all factors that change how quickly sound travels through water.

As you may recall, on the trip from San Francisco to San Diego, the computer tech aboard R/V Sally Ride used an instrument called an XBT (eXpendable BathyThermograph) which measures temperature to determine a sound speed profile of the water column. This was used to calibrate the data gathered by the multibeam echosounders, which reflect sound off the seafloor in order to map it. An accepted standard profile of pressure and salinity are used for these calculations, as temperature is the variable that affects the calculation the most. XBTs are deployed while the ship is underway (preferably moving at a speed of 10+ knots), and take only as much time as the weight does to drop through the water column. An XBT profile was recorded about once per day, and done at specific locations strategically chosen to represent data that could be used for an average sound speed. In cases where there are multiple variables that could affect sound speed, such as mixing of fresh and salt water near river outlets, XBTs are deployed far more often, if not almost continuously. Click here for much more about the history of XBTs at Scripps Institution of Oceanography. 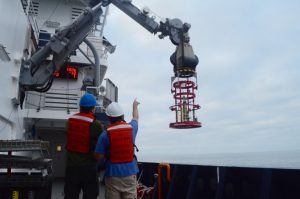 CTDs are deployed off the starboard side with the ship stopped on station.

During SVC1, with Dr. Bill Hodgkiss’ acoustic arrays and thermistor strings, the scientists used a CTD (Conductivity, Temperature, and Depth sensor) to determine the profile and calibrate the ship multibeam system and for comparison with the thermistor string measurements. The main difference is that it factors salinity (determined through the conductivity measurement) into the equation for sound speed, which makes for a more accurate profile. But it also requires stopping the ship and deploying the instrument, which takes a minimum of 30 minutes start to finish, and can take much longer if the water is deep. As previously mentioned, temperature is the biggest factor, so many XBT and CTD profiles look similar to each other, and may make minimal adjustments to the data when used to calibrate instrumentation.

On hydrographic cruises, which are focused mainly on properties of the seawater itself, a CTD rosette also includes niskin bottles mounted around the frame containing the sensors, which capture samples at different depths throughout the water column. The seawater is then analyzed onboard and used to calibrate the various CTD sensors.

Whether or not seawater samples are analyzed depends on how exact of a measurement each group needs. On long-term repeat cruises like the GO-SHIP decadal surveys and CalCOFI seasonal expeditions, seawater analysis onboard of 20-36 depths (called bottle checks) are a necessary step to ensure the sensors that measure the complete profile (which logs data 24 times per second) are calibrated properly. The adjusted sound speed profile is then passed on to the acoustic group onboard to calibrate their instruments and can be used for the multibeam data as well.