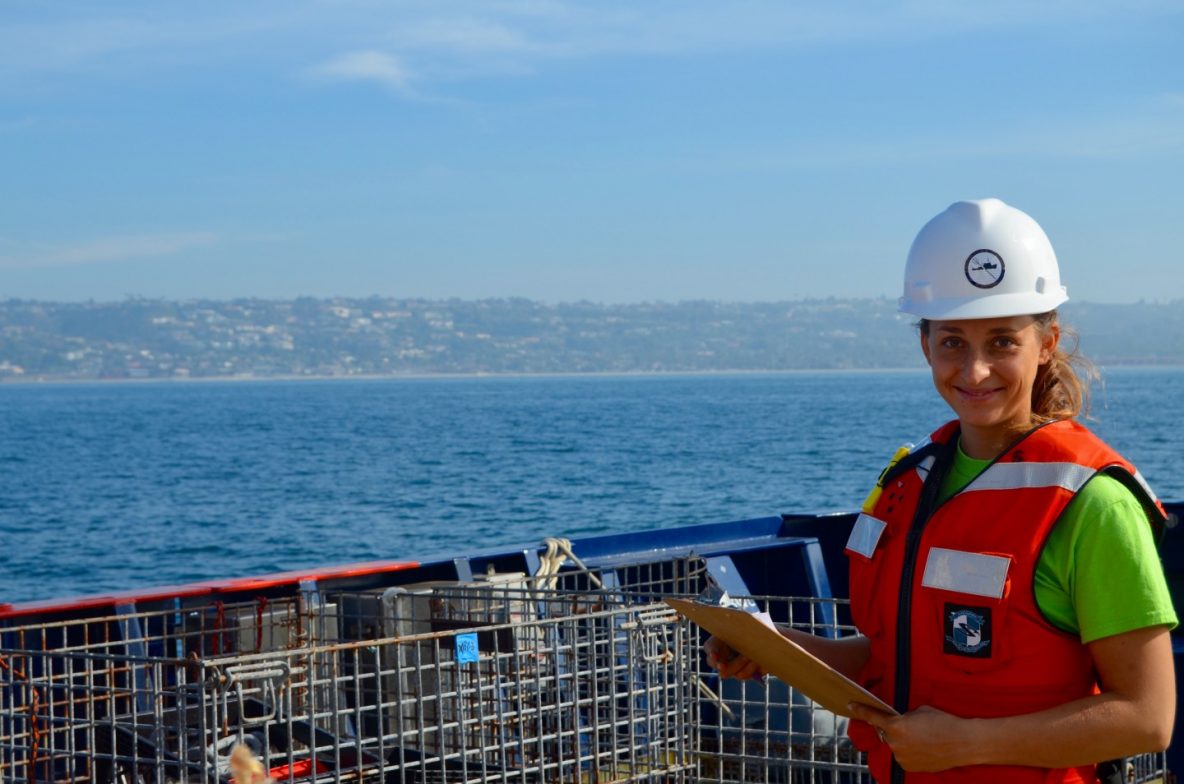 I’ve heard people describe being assigned as a research cruise’s chief scientist as anything from a great honor to drawing the short straw. It’s undisputedly a lot of work – coordinating schedules to optimize valuable ship time, adjusting that schedule every time something changes due to weather or equipment or personnel delays, communicating with the ship’s captain and restechs about the science goals, and making sure to delegate tasks so you can get some sleep. From technicians to graduate students to emeritus professors who are leaders in their fields, chief scientists come in all shapes and sizes. I interviewed three of the most recent people to lead a science party aboard R/V Sally Ride to find similarities and differences in their experience. 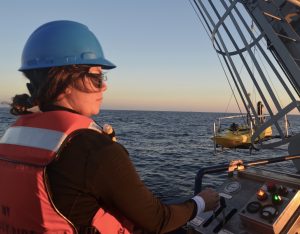 Dr. Sophia Merrifield is a postdoctoral scholar (postdoc) in Dr. Eric Terrill’s lab at SIO and was chief scientist for the two-day UAV cruise in December. Her group brought both tethered and untethered drones as well as a remote controlled kayak for testing; and shared ship time with engineers from Planck Aerosystems launching their drone. With so many different projects, Sophia explains how she plans the schedule, “I prioritize the workload by having a basic set of objectives that everyone can achieve. Dr. Terrill refers to this as a ‘base hit’. Once every group has gotten on base, you can start aiming for doubles, triples, and grand slams.” 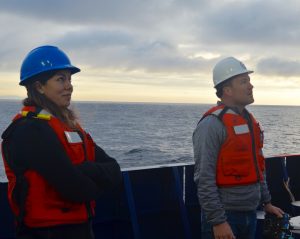 Sophia, along with Planck CEO Josh, watches as a drone
launches from the back deck.

With groups launching UAVs from the A-frame, work boat, and both back and forward decks, there was a lot to keep tabs on, and to communicate with the crew. “We landed 16/16 UAV deployments safely and didn’t damage any assets,” and for that Sophia credits the “fantastic crew, calm weather, and large, stable ship.” A realization that the knowledgable crew members who work for SIO provides a huge boost, she added, “There is a mutual benefit to crew/science communication and the chief scientist needs to expose that early and often. I find the crew are always friendly and curious about what the instruments actually do. We are all in some way interested in exploring the ocean, and we can all learn from each others experiences.” 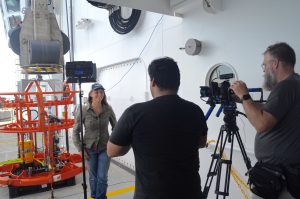 As chief scientist, Maddie was the main target of the
visiting media groups.

Maddie Hamann served as chief scientist on a three day cruise in December. A graduate student in Dr. Matthew Alford’s lab at SIO, she stressed the importance of trust – of the crew and of her fellow students and engineers onboard. The Alford group was sharing ship time with Dr. Ana Sirovic’s group, also from SIO, both of which needed to recover moorings that had been deployed months earlier in and around La Jolla Canyon and Catalina Island. “It’s natural to want to be in control of every aspect of the operations and ensure their success. Really, to do so would be a fool’s errand. There is so much going on – so much to know – that you have really got to just trust and communicate with the team every step of the way.”

Maddie (center, with ponytail) consults with members of her team, the Sirovic group, and the ship’s computer technician before beginning overnight CTD operations.

This is good leadership, but also just practical. Even on shorter trips like this one there’s round the clock science operations, so one simply can’t be awake all the time. “When I go to sleep I leave the shift leaders with the plan and the contingency plan and trust them to make the decisions that will get the job done. That way, unless something big happens, I get some shut eye!” 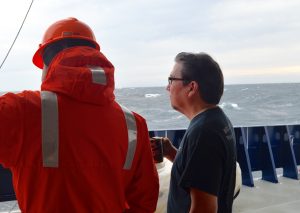 Part of Jim’s morning routine, checking in with the opposite watch
on how science operations are running, and if they’re still on schedule.

Jim Wilkinson is a senior scientist with the SIO CalCOFI group, which conducts a 17-day research cruise to visit the same 75 stations off the coast of Southern and Central California once per season, every year since 1949. The technicians rotate the responsibility of chief scientist, and November’s cruise on R/V Sally Ride was Jim’s 24th time serving as chief sci, all on other SIO research vessels. CalCOFI cruises have 24-hour science operations, including a hydrography group from SIO, NOAA fisheries work, and ancillary projects such as CCE-LTER, SCCOOS, and bird and marine mammal observerations. When running behind due to weather or equipment delay, Jim prioritizes the projects that are part of the 67-year long time series, and it’s become increasingly difficult to occupy all 75 stations in the allotted time. The fall 2016 cruise aboard R/V Sally Ride, however, was a different story.

As Jim summarized, “We actually had one day less shiptime than normal and even with a brief period of bad weather, we were able to occupy all 75 stations.” This was due in part to the new CTD handling system, which doesn’t require multiple people to be out on deck during deployment and recovery. We were able to run stations safely that would have been called off had we been on a different ship. But Jim admits that his experience only gets him so far,  “The Chief Scientist can try to influence morale and the success of the science mission but good weather, good cooks, and people who get along have more affect.” The team that runs R/V Sally Ride strives to optimize all these factors, making the chief scientists job as easy as possible.