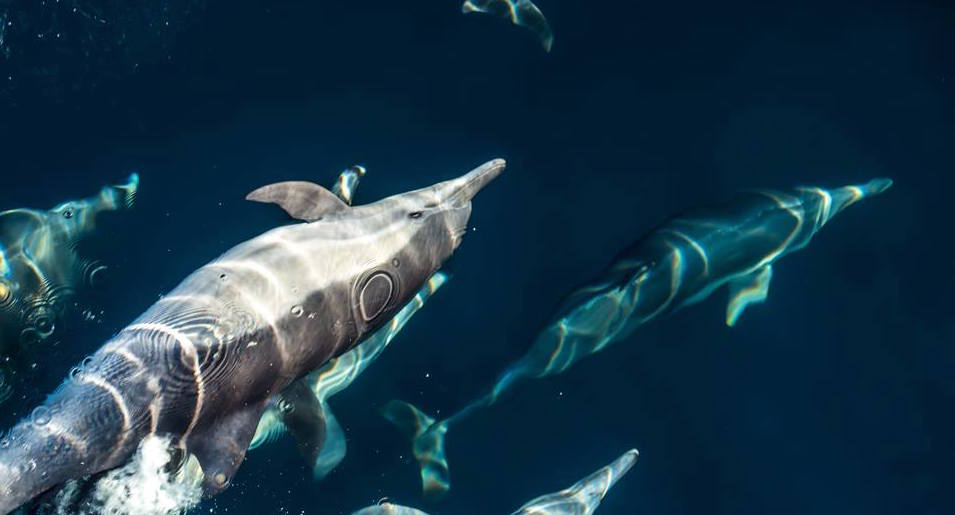 What a difference a day makes. The morning after having to move operations inside due to weather, the marine mammal observers aboard R/V Sally Ride were out enjoying the sunshine while 3,000 long-beaked common dolphins surrounded the ship, spread out from horizon to horizon. The chief scientist and ship’s captain had worked together to change the order of stations so that we moved inshore of the northern Channel Islands (Anacapa, Santa Cruz, Santa Rosa, and San Miguel) to avoid any more time in the high seas experienced on Wednesday. By the time we pick up all the stations along the coast and head back out, the weather is forecast to be calmer.

Observers Katherine, Amanda, and Eadoh stand watch on the forward 01 deck from sunrise to sunset.

Marine mammal observers have been present on every CalCOFI cruise, one per season every year, since 2004. They consist of staff, contractors, and graduate students who spend all daylight hours that the ship is transiting between stations scanning the horizon. Especially on summer cruises with longer daylight hours, this adds up to a lot of time outside. As mentioned in the previous post, they move inside to the bridge during especially poor weather. When the ship is on station doing its over the side science operations, the observers log their data, and get to take a bit of a break. 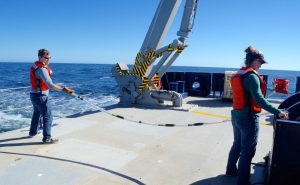 An acoustic array is also deployed off the back deck and towed between stations. It sits 5 meters below the surface, 300 meters behind the ship – which is close enough to deploy and recover quickly but far enough to minimize interference from ship noise. R/V Sally Ride was designed to be a quiet ship so acoustic science could be optimized, and the acoustic observer tells me that she can tell the difference. The array picks up sounds between 2-150 kHz (human hearing caps out around 20 kHz), ship noise is mostly at a lower frequency. Baleen whales vocalize in the 20-500 Hz range, so aren’t picked up by the array. Instead, on station, sonobuoys are deployed which pick up the lower frequencies.

Short-beaked (left) and long-beaked (right) common dolphins can both be found off the coast of California. Pictures by Amanda Debich.

Cruise totals for visual observations: 182 whales (blue, humpback, sperm, and fin), 4529 dolphins, 74 pinnipeds (sea lions, fur seals), and 1 turtle! Acoustic recordings will be analyzed and counted back in the lab.

Below is a recording and plot of common dolphin noises as heard on this cruise. The chatter around 10kHz are whistles used to communicate with each other. The vertical lines are echolocation clicks, which may be out of hearing range for many people.

Below is a recording and plot of a humpback whale call. Note the difference in scale, the frequency here is 400 Hz, or 0.4 kHz. The dolphins vocalize at a much higher frequency.