The first operation at each science station during a CalCOFI cruise is a CTD cast. Conductivity (salinity), temperature, depth (pressure), oxygen, nitrate, and chlorophyll sensors are strapped onto an aliminum rosette frame, along with 24 niskin bottles that can be closed via a computer program run from the lab. On stations deeper than 515 meters, the package is sent to that depth and 20 stops are made on the ascent in order to close bottles and collect water samples. There are some stations near shore that are shallower than 515 meters, on those the CTD is stopped 5 meters from the bottom and fewer bottles are closed throughout the water column.

As soon as the CTD is secured on the starboard deck, techs and volunteers flock to begin sampling. This is often a social activity, as everyone from the shift comes out to collect their samples. Music is played from waterproof speakers, sometimes dance parties break out, and it’s always nice to get outside every few hours, especially if the weather is nice. It can also be a harrowing experience, hard hats and work vests are required at all times. If the ship is really rolling, you have to be aware of water on deck and shifting gear. In the meantime, the fisheries group is conducting their net tows just aft on the starboard deck, so overhead and over the side operations are still underway (more about these in a future post).

Gas samples such as dissolved oxygen and DIC (dissolved inorganic carbon) are taken first. As the bottles are drained, the headspace fills up with air, which can alter the sample. Other measurements that won’t be affected by this are taken next, such as nutrients, salinity, chlorophyll and other pigments, particulate organic carbon and nitrogen, and a few others. There are often auxiliary projects, whether for a grad student’s experiment or a professor’s pet project, it seems like there’s always someone who wants extra water collected while the CalCOFI group is out at sea.

Salinity, dissolved oxygen, nutrients, and chlorophylls are analyzed onboard, so the technicians get right to work on that. The instruments are set up in the lab, with one tech assigned to each during both the day and night shifts (noon to midnight, or vice versa). These values, called bottle data, are then matched up with the sensors for calibration. 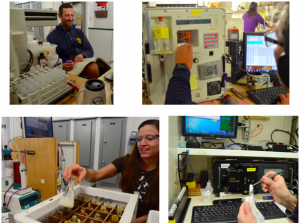