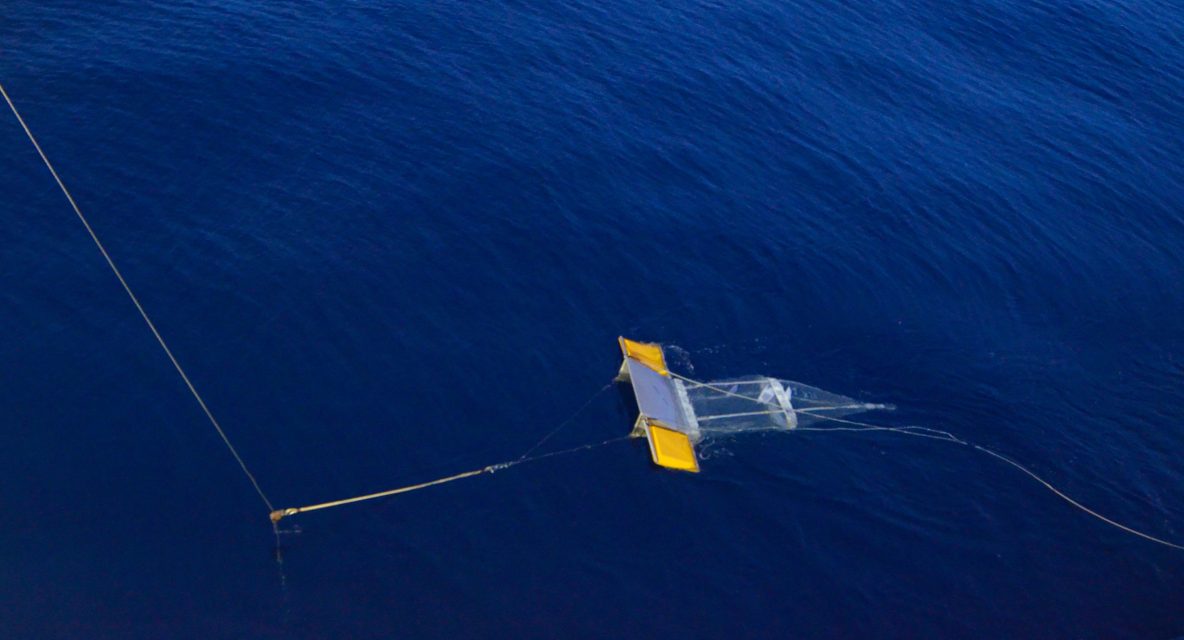 NOAA (National Oceanic and Atmospheric Administration) is a partner in the CalCOFI program, sending out four scientists who work in pairs, each for 12 hours per day. After the CTD on each station, nets are deployed. Samples are preserved out at sea and then processed back at the Southwest Fisheries Science Center in La Jolla, near the SIO campus. Fish eggs, larvae, and juvenile specimens are kept as part of the NOAA Ichthyoplankton Collection and invertebrate zooplankton (everything else) is logged at the SIO archives’ Invertebrate Collection.

Bongo and manta net deployments take place off the starboard deck, just aft of the CTD.

The bongo net, short for CalBOBL (CalCOFI Bongo OBLique), consists of two long nets with large openings. The mesh is 505 µm (micrometer, or one millionth of a meter), and the net is lowered to a depth of 210 meters and pulled along with the ship at low speed. An LOPC (Laser Optical Particle Counter) is mounted in one opening – more on this in a future post.

The manta net stays on the ocean surface, skimming the top layer of water for 15 minutes as the ship moves at ~1.7 knots. The openings in the mesh are the same size as the bongo – 505 µm – and the net opening is large, held open on a rectangular frame. These nets are designed to pick up larger specimens, letting the smaller ones flow right through. Small fish, salps, jellies, and cephalopods are all likely to be caught. 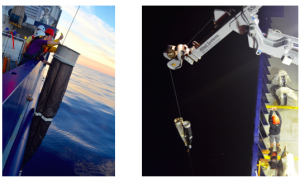 PRPOOS and pairovet net deployments, again over the starboard rail.

On certain stations two additional nets are deployed. Both are deployed vertically and thus require the ship to hold station, rather than move slowly forward. 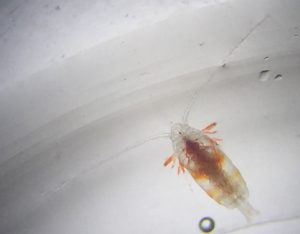 Copepod are about 1 millimeter in body length.
Photographed by Dr. Dave Checkley.

The PRPOOS net (Plankton Rate Processes in Oligotrophic Ocean Systems, pronounced “purpose”), with a smaller mesh size of 202 µm is designed to capture copepods, tiny crustaceans that are the main source of food for many marine animals. It is lowered to a depth of 210 meters and then brought back onboard.

The pairovet consists of two small nets that are deployed vertically to a depth of 70 meters. The even smaller 150 µm mesh is designed to collect fish eggs. It is only deployed on stations closer to shore as that is where eggs are found in higher density.

Pictures of the samples coming in a future post!