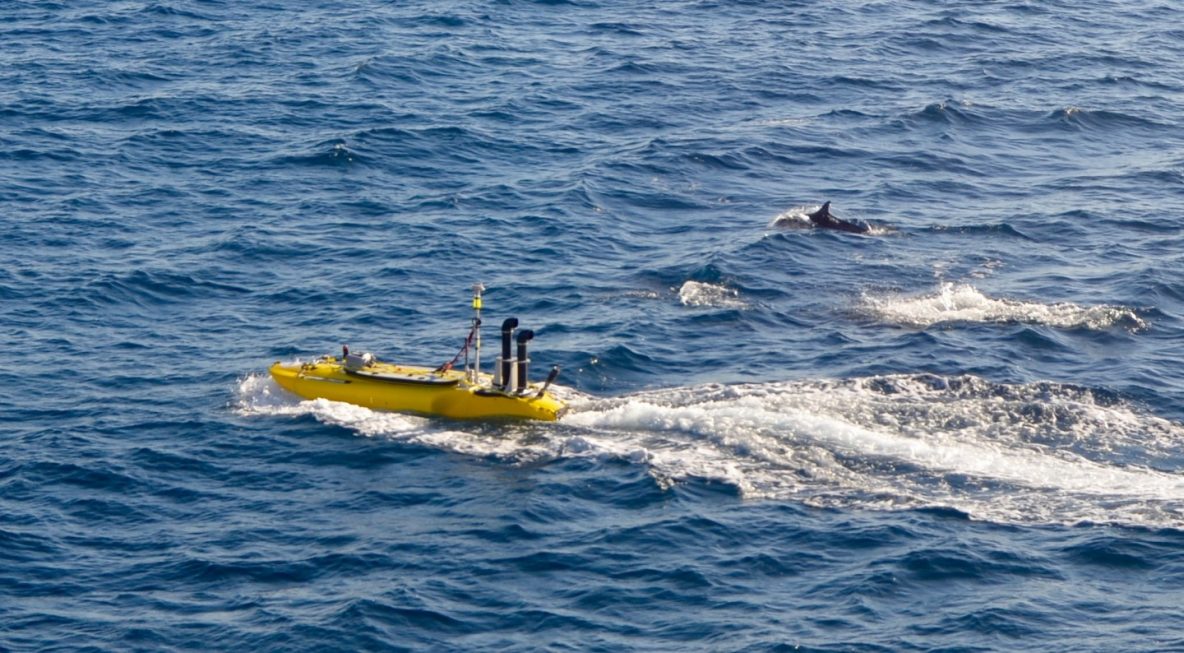 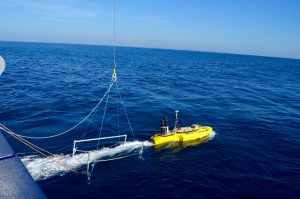 The remote-controlled kayak takes off after being deployed from R/V Sally Ride.

During a recent science verification cruise a remote-controlled kayak from Dr. Eric Terrill’s group at SIO was tested, using R/V Sally Ride as a platform. It sits in a custom-built frame, which was lowered into the water using the ship’s A-frame. From there it was operated by a hand-held controller just like those for toy cars, leaving the frame and heading off on its mission. Undergraduate student Derek Ung has spearheaded the project for the Terrill lab, and he had a slew of tests to put the kayak through. After showing a few others how to work the controls, he put it through its paces, moving up to the 01 deck in order to avoid any obstructions between him and the kayak that could have weakened the connection. It has built-in modes to shut off and restart its engine, a 7 horsepower unit usually found in go-karts that sounds just like a kid making motorboat noises in the bathtub but can propel the kayak up to 10 knots. 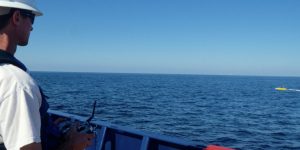 Technician Mike takes a turn at the controls.

Currently the kayak houses lights, a communications array, and the necessary battery packs, along with a GoPro camera (see video below). The idea is that oceanographic sensors could be mounted onboard, both above and below the surface. The kayak could then travel away from a research vessel in order to take measurements without interference from the ship, or launched from shore or a pier. It is a relatively cheap way to get sensors into perhaps difficult or remote areas that could lead to many important discoveries. 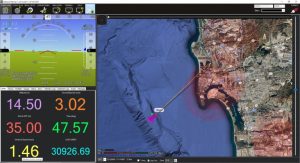 Screenshot from the software during deployment.

The connected software allows the operator to keep tabs on ocean conditions and how the kayak is functioning. Derek spent a few hours each day with the kayak deployed, testing its capabilities, and seemed very pleased with the results. Other than it just being a novel way to collect data, the future for this and other remote-controlled devices seems bright. The Terrill group, along with many others at SIO, are leading the way with tests like this one aboard R/V Sally Ride.

At one point, a pod of curious dolphins approached the kayak to investigate it. Like me, they’ve probably never seen anything quite like it.