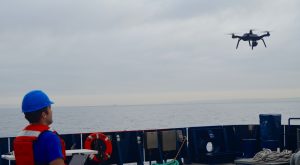 Engineer Daniel launches a drone from the fantail of R/V Sally Ride.

During a recent science verification cruise, Dr. Eric Terrill’s group from here at Scripps Institution of Oceanography tested out some of their suite of remote-controlled oceanographic equipment – modified aerial and aquatic vehicles that can be loaded up with sensors and sent out on scientific missions. Drones are becoming more and more popular – from the hobbyist to the military, there’s many applications. The Terrill group tested out both a tethered and an untethered version aboard R/V Sally Ride. 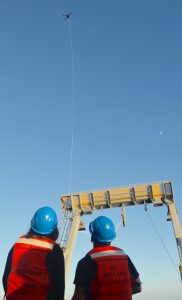 The tethered drone is connected via a 100-foot cable, which supplies power and can keep it in the air indefinitely. It is operated by a remote control, and was launched on the back deck of the ship – which was completely clear of other gear, unlike on other recent cruises.

An untethered drone was also deployed from the fantail, making rounds away from the ship once the technicians were comfortable with its communications and capabilities. Generally its range is up to a kilometer, more than that and line of sight between the ship and such a small target gets difficult. It sends live video to a tablet connected to the remote control, assisting the operator’s maneuverability (see an example of the video below). This drone has a “follow the ship” function that pairs it with the ship – as long as the GPS signals are synced, the drone will move as the ship moves. This capability was tested with R/V Sally Ride, as well as plenty of trials with the ship holding station.

Drones are already in use in oceanography – tracking migrating whales and turtles, counting and identifying nesting birds on remote islands, just to name a few projects. The Terrill group is working to make drones a cheap and reliable way to study ocean habitats and populations all around the world.

Video from a @Scripps_Ocean #drone coming in for a landing on R/V Sally Ride. More details in a blog post tomorrow https://t.co/xTsTibNb3h pic.twitter.com/5oZxRAtBGT