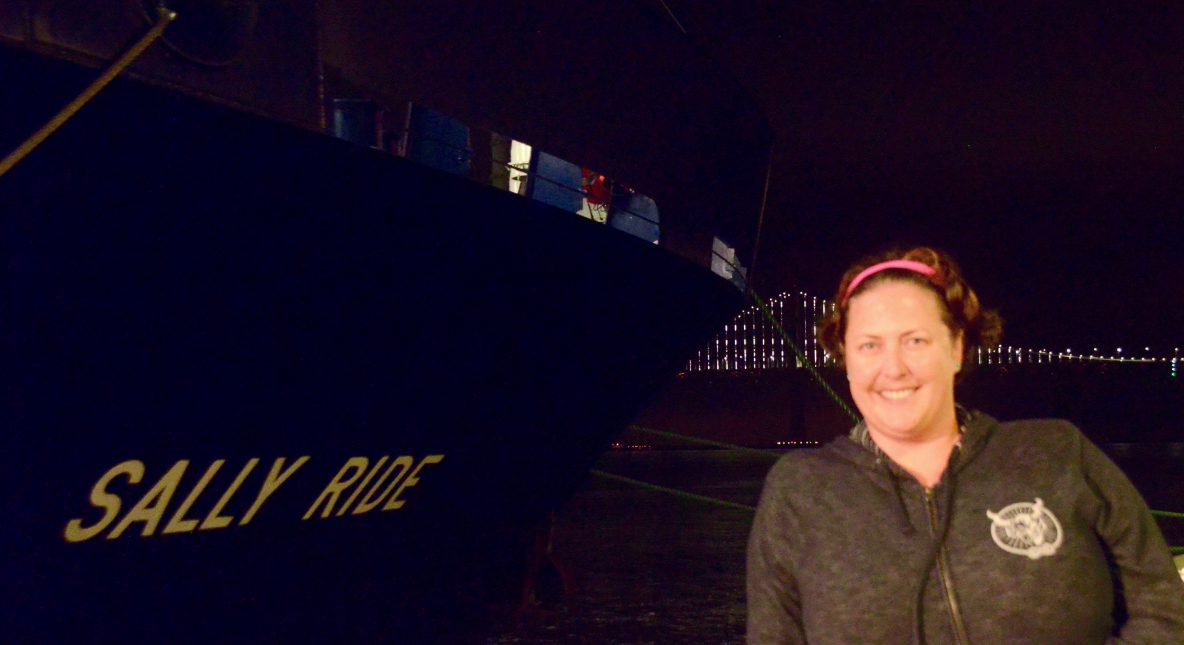 “Not all those who wander are lost.”  – J.R.R. Tolkien, Fellowship of the Ring

If I’m going to write a series of blogs about technicians at sea onboard R/V Sally Ride, I may as well start with myself. If you’ve read the brief intro in the About the Author section on this page, you’ll know that I have always been drawn to the ocean and dreamed of being an explorer. When I’m in the ocean I feel like I am where I’m meant to be. Sometimes that makes this job harder – crossing oceans, sometimes for months at a time, but not being able to actually get in the water until you reach port. 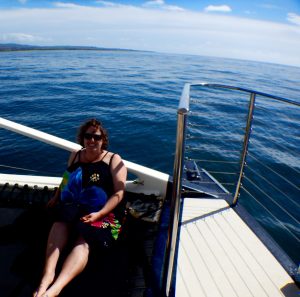 In my natural environment, on the ocean.

I came to San Diego for undergrad, getting a degree in biology from UCSD, and have been here ever since. I can’t imagine living anywhere else, and working on the La Jolla campus, coming over the hill and seeing the cove spread out before me, doesn’t get old. I didn’t make ocean sciences a focus of my studies or of my career for a few years, and just wasn’t satisfied. So I followed advice I’d been given many times, and now tout myself – no one’s going to pay you to get experience, so get out there and volunteer, make yourself valuable, and go from there. I volunteered at the Birch Aquarium at Scripps for a few years and through that, was chosen as a volunteer on a research cruise run by SIO grad students. I was immediately hooked – a laboratory on a ship, collecting samples and analyzing them 24/7, was such a different and exciting environment. It was living, breathing science and I was part of it.
Within six months, I was working full-time at the SIO Oceanographic Data Facility (ODF) as a sea-going chemist, analyzing water samples for nutrient and dissolved oxygen concentrations, and salinity. I’m also being trained in restech duties, so can help run deck operations and equipment. I enjoy working as a technician – I get hired for different types of projects all over the world, rather than just focusing on one area. I’ve never been tempted to go back for a postgraduate degree, but I really like working with different groups and learning about their science goals. I spend about 100 days a year out at sea, working on vessels from SIO ships off Southern California to Coast Guard icebreakers in the Arctic. I’ve crossed every ocean and been to the North Pole, but still have yet to get to the 7th continent, Antarctica. 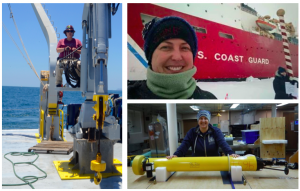 Since June of last year, I’ve been assigned to outreach duties aboard R/V Sally Ride, and it’s been amazing. Getting to be part of bringing this beautiful new ship to its home at SIO, and getting the public and scientific community involved, has been an honor. Going out on the science verification cruises has also been a great experience, and a very different one. As a chemist, I mostly participate in hydrography cruises, water sampling using a CTD rosette. So the ship may be different every time, but the deck and labs are often set up very similarly for those operations. 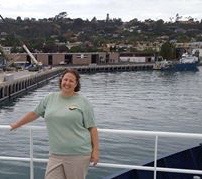 Coming in to my favorite port, San Diego,
on R/V Sally Ride. Picture by Gabriela Chavez.

Here on Sally Ride, I’ve been part of back to back cruises with completely different science goals. Being onboard as the ship goes through those transitions is very interesting, and gives me a great respect for her capabilities. From net tows on CalCOFI to seeing the seafloor with ROVs to launching drones to seafloor mapping to coring, R/V Sally Ride is ready for anything.

My love for the ocean is now intertwined with my love for Scripps. Working for an institution where everyone is interested in knowing more about the ocean and its influence on our lives and the world is inspiring, and makes me feel like I’m part of something worthwhile.