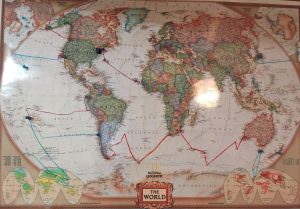 Map showing where my oceanography career has taken me.
Winkel tripel projection of course.

I love maps. When my family drove across the country when I was a kid, I was the navigator, tracking how many miles until the next junction, or Dairy Queen. When my dad asked me what I wanted for my 25th birthday I told him a globe, the kind with sea monsters on it! I love that it’s easy to find Tahiti on pretty much any map – the legend is usually near French Polynesia because that’s the only spot on Earth you can put it without covering anything up. If you’ve read the “About the Author” section, you know that I have always wanted to be an explorer. The 29% of Earth that is land is already mapped, and the ocean floor has been mapped as well, but not in nearly as much detail. We have the technology now, and it feels like modern day exploration. 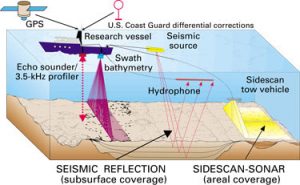 US Geological Survey infographic showing the various
instruments that can be used to map the seafloor.

I was excited to hear that during R/V Sally Ride’s transit home to San Diego for the first time, the ship would be testing out its state of the art seafloor mapping equipment. Dr. Eli Silver and his graduate student Joel Edwards, from UC Santa Cruz, were on board. They used multibeam echo sounders that are mounted to the bottom of the ship. These instruments send out sound pulses and measure the angle and elapsed time when the signal bounces back to gather data about the seafloor. We mapped along the Santa Lucia Bank, Hosgri, and Catalina-San Clemente faults systems off the coast of Central and Southern California. In the 1970’s, Dr. Silver did seismic mapping of this area, which generates basic bathymetry (underwater topography) maps, but no one had been back since specifically to map the fault systems in better detail. Echo sounders have the ability to generate more detailed profiles. The Sally Ride has two multibeam systems (the swath bathymetry shown above) that are capable of a variety of frequencies, some better for shallow waters while others are capable of detailed measurements to the depth of the Mariana Trench at nearly 11,000 meters (or 6.8 miles). The ship also has a 3.5kHz echo sounder, which provides a profile of the sub-bottom (the first dozen or so meters below the seafloor) from which the types of sediment can be inferred. 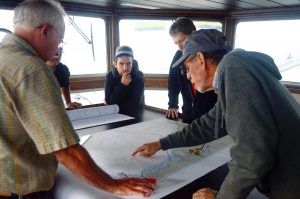 First step of the project was to meet with the captain on the bridge to go over the plan. I was excited to see a paper chart out, ready for the captain to draw the transects by hand using measuring tools such as triangles and a divider. The approach angles and switchbacks desired by the scientists were drawn on the chart for the use of the bridge officers who drive the boat. 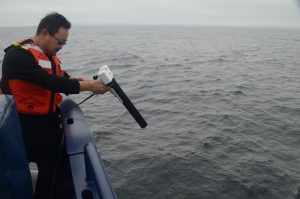 Computer tech Dan Yang fires an XBT from the back deck of the Sally Ride.

The computing resources technician onboard, Daniel Yang, was in charge of making sure the instruments are functioning properly and that all the data is collected. He also fired off an XBT (expendable bathythermograph) at least once per day. XBTs consist of a copper wire connected to a temperature probe that sinks at a known rate. Temperature data is relayed up the wire to a computer as the probe sinks to the bottom of the ocean, and a sound-speed profile is calculated. Sound doesn’t travel through seawater at the same speed at all depths and temperatures, so an understanding about the profile at that location on that day needs to be factored into the multibeam data in order for it to be accurate. 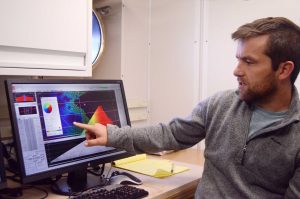 Grad student Joel Edwards points out a feature, shown by color gradients,
shown on a monitor connected to one of the multibeam echo sounders.

Dr. Silver, Joel, and Dr. Bruce Appelgate (Director of Ship Operations and Marine Technical Support at SIO, but also a geology and seafloor mapping geek) stood watches just like the crew (two 4-hour shifts) so that someone was always in the computer lab as the monitors updated with data in real time.

SIO’s research vessels are all equipped with multibeams, which are running most of the time the ships are offshore. The cruises I go on are usually focused on the hydrography (chemical properties of seawater) but every step of our journey is usually mapped as well. Sometimes other scientists onboard are using that information, but even if that’s not the case the data is shared and adds to the ever-growing database of detailed seafloor maps.

Mapping added about two days to the travel time, but was a fun distraction from what would have otherwise been a dead-head transit. And it was appropriate that Dr. Silver was aboard as well; he was also onboard the Melville as a postdoc in 1967 for that ship’s first transit to its home port of San Diego. Hopefully he’s the good luck charm that ensures a research vessel’s long and productive life at Scripps Institution of Oceanography.