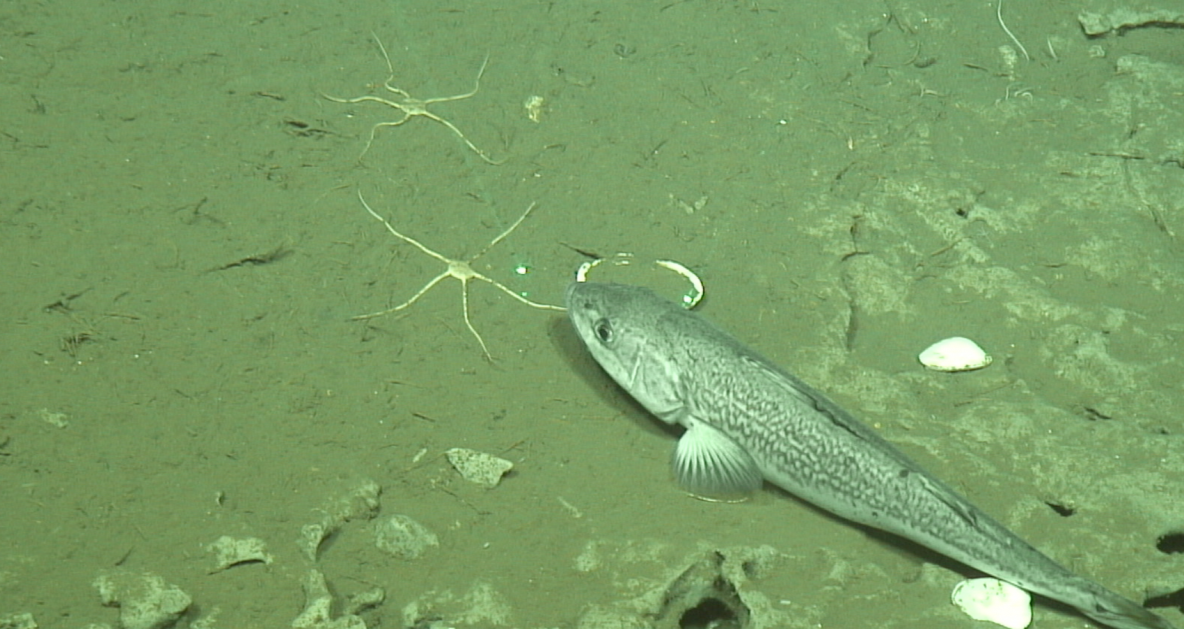 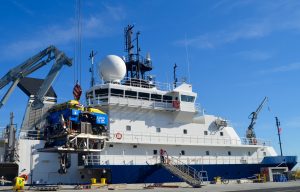 ROV Jason is loaded onto R/V Sally Ride for a science verification cruise.

Last month, R/V Sally Ride went out to sea for a week with the remotely operated vehicle (ROV) Jason onboard, which is owned by Woods Hole Oceanographic Institution (WHOI). One of the science verification cruises, the main purpose was to ensure that the ship was able to support the ROV work in a way that the technicians at WHOI are accustomed to. Since deployments of the ROV were a necessary part of this process, researchers from SIO created a science plan so that data could be collected for their projects at the same time.  The engineers and technicians that make up the Jason team get a copy of the science plan and operate all the machinery themselves. A double-wide container was bolted to the back deck of R/V Sally Ride, providing a base of operations for the techs, with room for the scientists who run the cameras and communicate with the ROV pilot. 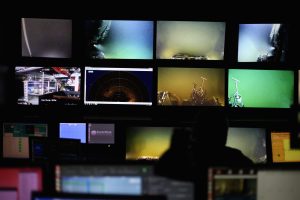 Inside the Jason van, with many screens for the ROV pilot, engineers, and
technicians along with a station set up for the scientists. Photo by Wei Di.

One focus was ecological work, to study the interactions of living organisms with each other and their environment. This included a visit to a site called Fish Bands, which is located about 6 miles off the coast of Point Loma and has been a fish aggregation study site for about two and a half years. Scripps students, supported by the UC Ship Funds Program, have been performing trawls along the seafloor (about 340 meters deep) in order to study the fish population and whether the dynamics change seasonally. But trawls have their limitations – specifically they don’t provide information about how the animals interact with one another. Live video from an ROV does, and so transects along the seafloor in this area were planned. Natalya Gallo and Kirk Sato, both SIO graduate students, were in charge of this project.

At the scheduled time, ROV Jason was moving upslope, from deeper water, to the Fish Bands site. Visibility dropped to zero, a sediment cloud covering the entire area making it impossible to collect the visual data they were hoping for. This raises the question of whether this layer always exists in this area, or was it due to seasonal, tidal, or weather patterns? Since there were other projects scheduled to use the ROV, a second chance later in the trip wasn’t possible. Sometimes that’s what happens on a science cruise, you end up with more questions than answers. 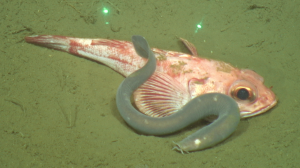 Longspined thornyhead (red fish) and hagfish (grey) on the seafloor, as observed by
ROV Jason. Green dots are lasers on the ROV mounted 10cm apart.

Other ecological work was done during the week-long cruise, with transects in the water column (pelagic zone) and on the seafloor (benthic zone). Using the ROV allowed for observations of interactions between species, as in the thornyhead and hagfish pictured here. If collected in a trawl, scientists would have no idea that these fish had direct interactions with each other, only that they were found in the same vicinity. 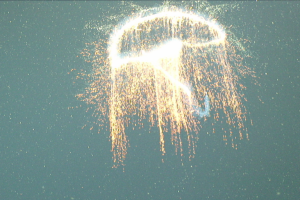 Though it may look like fireworks, this is actually a colony of animals who depend on each other to survive.

Transects done in the pelagic zone, coordinated by Amanda Netburn, an SIO alumna and current post-doc at NOAA, allowed researchers to observe species of gelatinous animals that are often damaged beyond recognition in a net. One example of this is the siphonophore pictured here. While they look like jellyfish, they are actually colonies of specialized individuals – some sting, capture, and digest prey (the dangling tentacles in the picture), while others, like the barrel-shaped ones in the lower right, provide locomotion.

The ROV Jason has many sensors and other instrumentation attached to it in order to study the ocean. Its ability to stream back live video is a huge draw for scientists. The hours of video will be watched over the coming months to document important location and behavioral data in order to add to our ever-growing understanding of the species right here off the coast of San Diego.