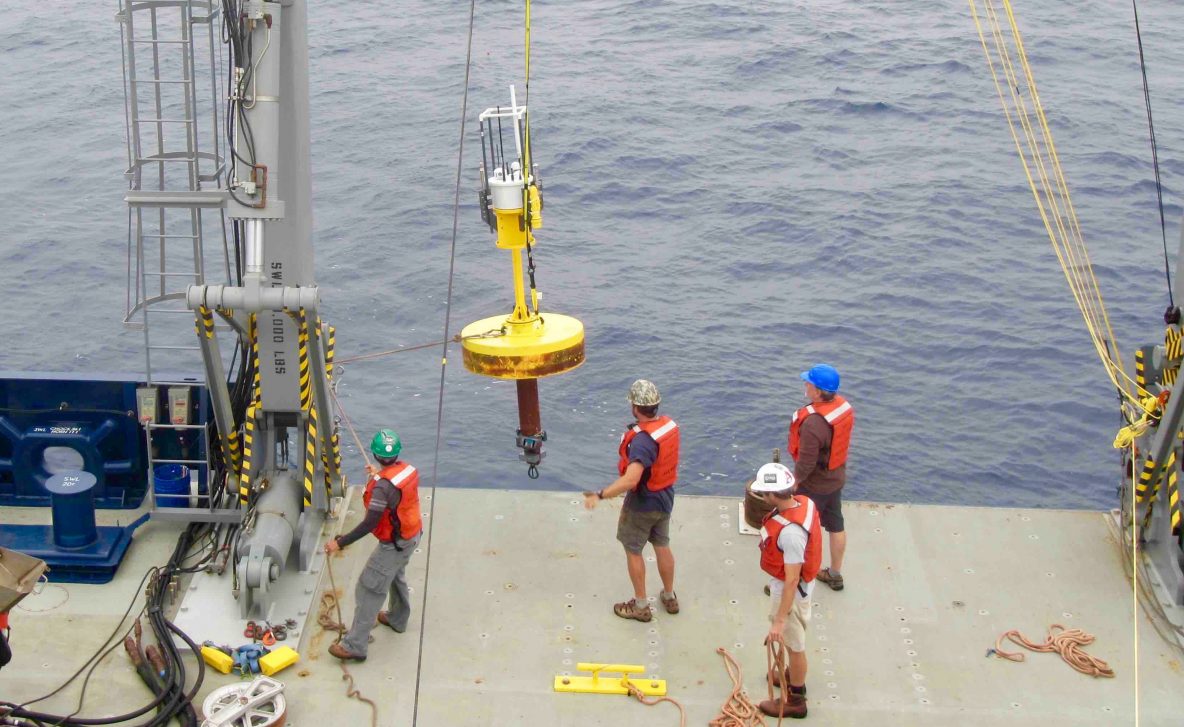 Technicians Gabriela and Jeremy deploy a surface buoy. Below the surface is a
thermistor string, along with floats and weights to keep it vertical in the water column.

Dr. Bill Hodgkiss is back aboard R/V Sally Ride, along with engineers and technicians from his group at SIO’s Marine Physical Laboratory (MPL). As with their cruise last year, which was the ship’s first official science verification cruise, they have brought along multiple instruments used to study acoustics off the coast of Southern California. On that cruise, the moorings were anchored to the seafloor using old train wheels. This expedition, however, focuses on drifting moorings that are not anchored. Instead they are connected to surface buoys with GPS for keeping track of its position, as well as lights and a beacon to aid in recovery.

The sound source is deployed and towed behind the ship for a few hours
each day.

In order to calibrate the acoustic instruments deployed, a sound source is towed behind the ship. The known noise level and distance from the recording devices puts every other noise recorded into perspective. CTD casts are also performed on a regular basis in order to provide a sound speed profile (more on the importance of that in this post). An echosounder survey was also conducted in order to determine the properties of the seafloor (see more about the Chirp system here).

This science party has been aboard a few times, and always puts Sally Ride through her paces, using ship’s equipment such as the crane and A-frame, as well as the CTD and many other shipboard science systems. Not to mention the bridge crew who navigate the ship with the necessary precision and help look out for floats upon recovery. Thankfully, the Hodgkiss group also come prepared and have a lot of experienced hands, so it’s time well spent.