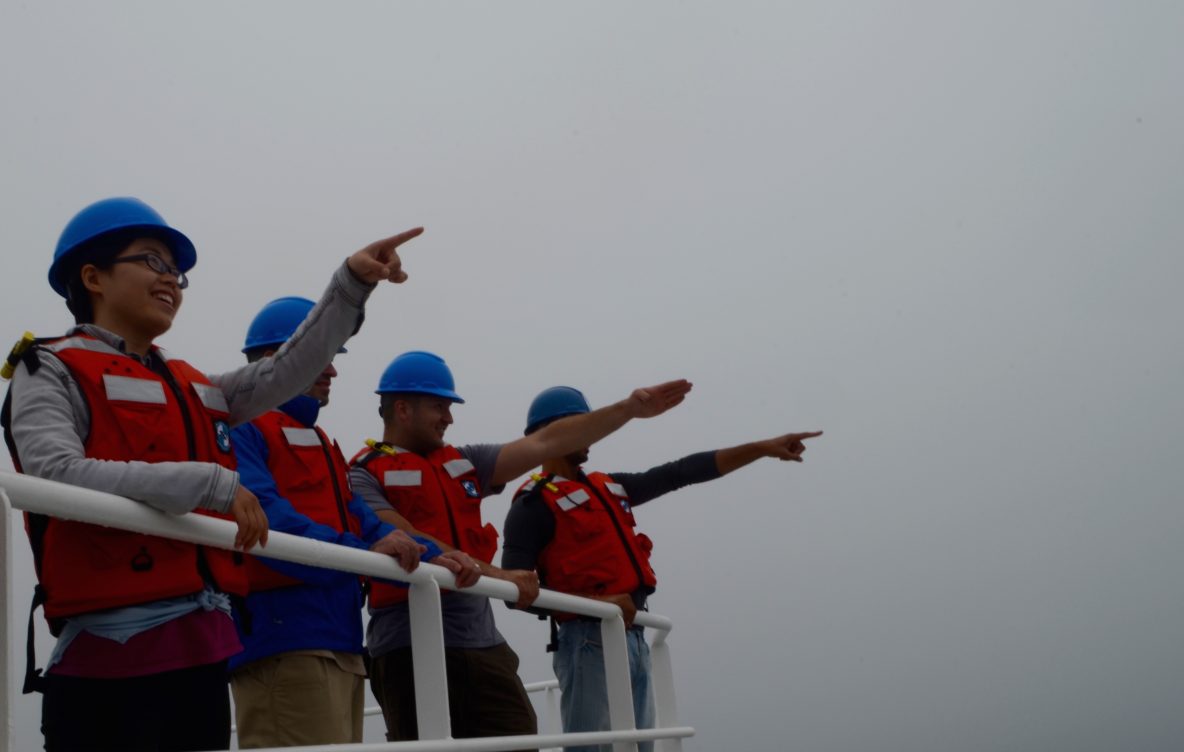 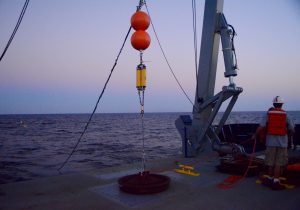 Restech Matt Durham prepares to deploy an acoustic array from the fantail of R/V Sally Ride.

The first science verification cruise (SVC) took place on R/V Sally Ride earlier this month. If you’ve read the earlier posts, about the project goals and loading of the ship, you know that the objective of the chief scientist, Dr. Bill Hodgkiss of UCSD, was to record acoustic signatures from ships in the Santa Barbara Channel. We departed SIO’s marine facility in Point Loma on a busy morning in San Diego Bay. Another of SIO’s research vessels, the R/V Robert Gordon Sproul, also departed that morning, and there was a lot of other traffic – from sailboats to Navy destroyers. It took us about 20 hours to get up to our target area, where we would spend the next 12 days in a roughly 60 square mile box. 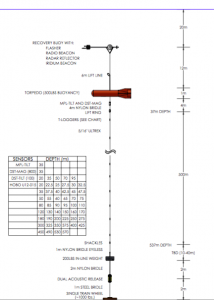 Schematic of the thermistor arrays.

The thermistor strings were the first to be deployed. They run from the bottom of the ocean (500-580 meters in this area) to about 20 meters below the surface (to leave plenty of room between it and the bottom of any passing ships). There are 46 temperature sensors along that length, along with floats to keep the string as straight up and down in the water column as possible. It’s anchored by an old train wheel and just above that is a transponder-controlled release mechanism so that, at the right time, a signal sent from a transducer lowered over the side of the ship activates that release and the whole array pops up to the surface. The train wheel remains on the seafloor. Which is why the group brought plenty of spares, a total of 12 for the 6 arrays. If any part of the array malfunctions, it can be released, brought back on board, repaired or replaced, and then sunk again with a new anchor. Indeed, we came back to San Diego with only 4 train wheels, as two of the acoustic arrays had to be recovered, repaired, and re-deployed over the course of the cruise. 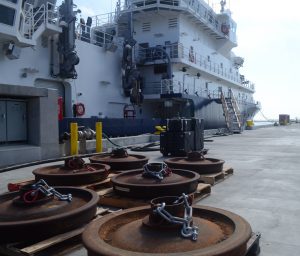 Train wheels waiting to be craned aboard.

Both thermistor arrays were deployed without incident, taking 2-3 hours each to unspool the cable and attach all the temperature-recording devices (using clips, zip ties, and electrical tape). The arrays are deployed top to bottom, so that the last piece to be connected is the train wheel anchor. The ship is steadily moving during the entire deployment, in order to keep anything from getting tangled. This means that the top of the array is trailing ~500 meters behind the ship by the time the anchor is ready to be released. The captain or mate on the bridge radios down to the restech running operations on the back deck to notify them when the ship is passing over the spot where the scientists want the array to come to rest. A line is pulled, releasing the anchor, which drops to the ocean floor and pulls the other elements of the array into formation above it. 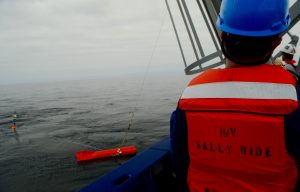 The top of the array is deployed first, including the huge torpedo-shaped buoy.

It’s at this moment that the giant torpedo-shaped buoy near the top of the array starts moving slowly but steadily towards the ship. Which, even knowing that it’s just a float and not enemy fire, is a bit ominous. If everything has been calculated correctly, the last of the equipment should sink below the surface well before reaching the ship. Dr. Hodgkiss deployed both thermistor strings right along the shipping lane, one north (outbound from Long Beach) and the other south (inbound) of the separation zone, which is the equivalent of a highway median. Next up to be deployed was four acoustic arrays, set up right in the middle of the separation zone, and each 1km apart from each other. 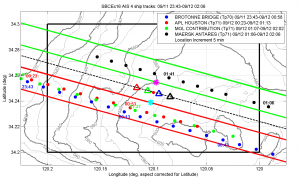 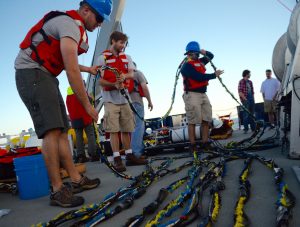 The entire array is laid out in order across the ship’s fantail before
deployment. The acoustic array’s cable fairing and instrumentation
has to be kept from getting kinked.

The acoustic arrays are only 110 meters long, so were quicker to deploy, taking under an hour each. They have the same train wheel anchor, but the buoy requirements and locations are shifted due to the different equipment connected to the cable. Even the cable is different – it has fairing along it, which is a sort of fringe that keeps the cable from vibrating at a resonance that will disrupt the instrumentation. The whole point of this array is to listen, so it shouldn’t make any noise of its own. Check out the video below that was shared as a tweet during the cruise. It shows cable without fairing during deployment, and the vibration is obvious.

After each deployment, communication with the array is attempted. A transducer is lowered over the side of the ship, a code is entered into a deck box that then sends out a ping, which should be received by the acoustic release just above the anchor weight. It pings back and the deck box determines the distance the sound traveled, and that tells the scientists if everything was deployed correctly. The range should be close to that the total depth of the ocean floor, as the acoustic release is near the bottom of the array. 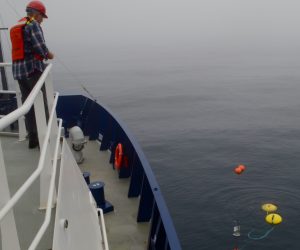 Dr. Hodgkiss watches as the ship prepares to recover an acoustic array.

All of the instruments were left for multiple days, gathering data the whole time, and only recovered if necessary for replacement or repairs, or when it was time to collect the gear and head back to port. One foggy morning, with visibility less than 300 feet throughout the day, we began the final recoveries. It definitely wasn’t ideal conditions. Even knowing roughly when and where the equipment should surface doesn’t guarantee that you’ll spot it. Thankfully, operations went smoothly and the gear was all safely recovered.

To release, the transducer is again lowered into the ocean, and this time a different code is entered into the deck box that causes a switch to disengage the array from the anchor. In about 5 minutes, the gear should be at the surface. All science hands were on the forward decks to help locate the equipment. A member of the crew who assists with bridge watch was the official spotter and radioed up to the bridge as soon as a visual was confirmed. The ship then maneuvered so that the gear would come along its starboard side, creeping towards it at 0.5 knots. 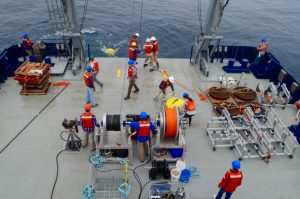 Everyone has a job during the recovery operations.

A grappling hook was thrown to snag the line and guide the array to the back of the ship so that it could be brought onboard using the A-frame. This again required all hands in the science party. Once every piece was back onboard, it had to be rinsed and secured. Even in calm seas, everything has to be lashed down.

The deployment and recovery of arrays such as these takes tremendous planning, coordination, and communication between the scientists and ship’s crew. Part of this science verification cruise was to confirm that R/V Sally Ride is capable of such work. And she passed with flying colors!