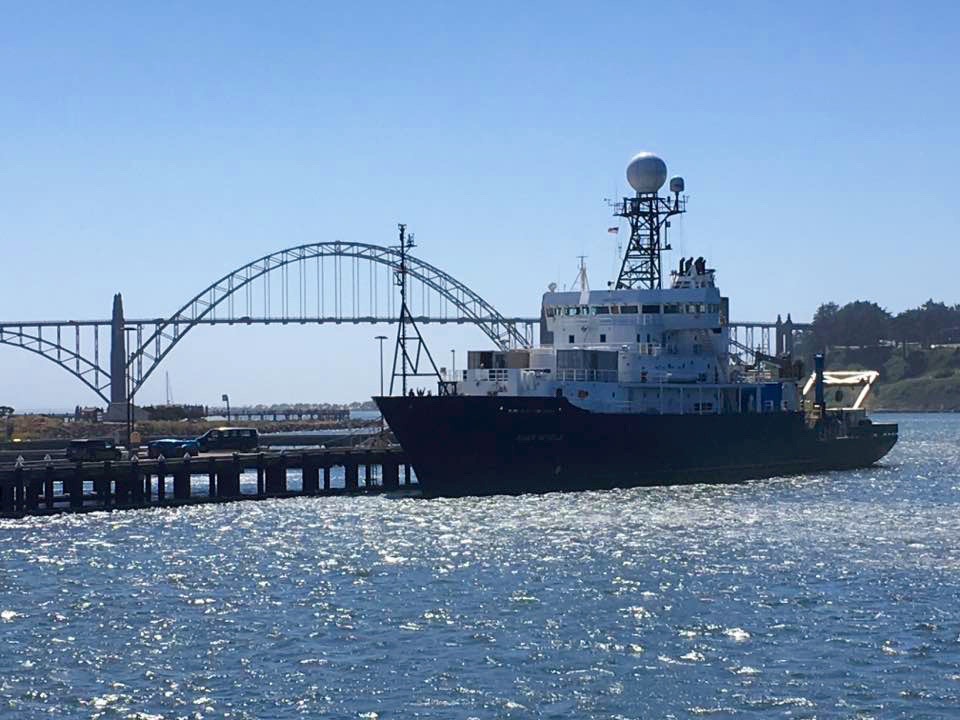 This week, two of Scripps Institution of Oceanography’s research vessels – Sally Ride and Roger Revelle – were in Newport, Oregon in order to offload gear. Both Oregon State University and NOAA have wharf facilities on Yaquina Bay, where their own research vessels live, and scientists from those institutions (among others) were aboard the SIO ships. Sally Ride just completed a successful mooring switch-out in the Gulf of Alaska and Revelle is being used to launch WHOI’s ROV Jason (who you may remember came aboard Sally Ride back in November) on a series of research expeditions this summer.

R/V Sally Ride (left) and R/V Roger Revelle were both tied up in Newport, Oregon this past week. Photo by UNOLS technician Tina Thomas.

Though there are a few ways to distinguish the ships from each other, the easiest is the placement of their HiSeasNet internet domes. As you can see in the photo above, Revelle‘s is up at the very top of the mast (right), whereas Sally Ride has two on the deck above the bridge.

The tides and currents getting in to Yaquina Bay can be pretty extreme, requiring planning in order to navigate safely in the channel and under the arch bridge that spans the bay as part of scenic Route 101. Large ships like the research vessels time their entries and exits for the “stand of the tide.” Also known as slack water or slack tide, this is the time in the tidal cycle where water is neither ebbing nor flowing. If there’s any delay, the ship has to wait close to six hours for the next window of opportunity.

Many crew members in the Scripps fleet have worked aboard both research vessels at some point in their career, so there’s a lot of overlap, camaraderie, and friendships among the crews of Sally Ride and Revelle. There were excursions around town while both ships were in port – to see the sights, eat excellent seafood, and of course visit the local brewery.

R/V Revelle has a few more trips in and out of Newport in the coming weeks, but R/V Sally Ride is now on her way home to San Diego. Stay tuned to the ship’s social media pages for pictures of her triumphant return after months away!

Reunited! Both R/V Sally Ride & R/V Roger Revelle are in Newport, OR this week for offloading after research cruises https://t.co/UiYfX7yf2L pic.twitter.com/gruicsVHMu