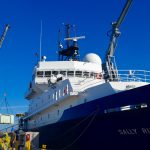 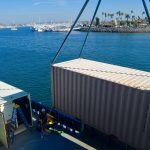 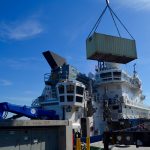 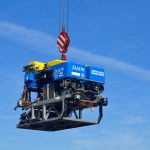 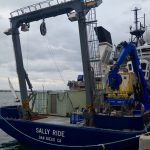 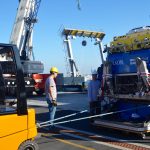 The CalCOFI cruise ended on a Tuesday, after successful completion of all 75 science stations. We arrived back at the dock before 9am that morning, and the scientists worked to offload their gear right away – everything was back at the labs in La Jolla by lunch time. Beginning the very next morning at 7am, a new group of scientists were at the ship ready to load their gear. ROV Jason doesn’t pack light – it took seven truck loads and the better part of four days to load the ship for this science verification cruise. The working deck and labs of R/V Sally Ride were completely transformed over that time, which also corresponded with the long Thanksgiving weekend. Technicians from Woods Hole Oceanographic Institution (WHOI) worked with SIO techs and crew members over the holiday in order to set up all the infrastructure needed for the Jason ROV. Click here for a 360 degree view of the back deck setup for the cruise.

The ship got underway on Sunday and has a busy week planned. Click here to follow live video feeds from the ship, as well as science plans, thanks to the Inner Space Center.

Experiments on the Seafloor with ROV Jason

#ROV Jason waits patiently to be loaded onto the ship. Follow along for the science verification cruise next week! @WHOI @Scripps_Ocean pic.twitter.com/o3euNYuPiA