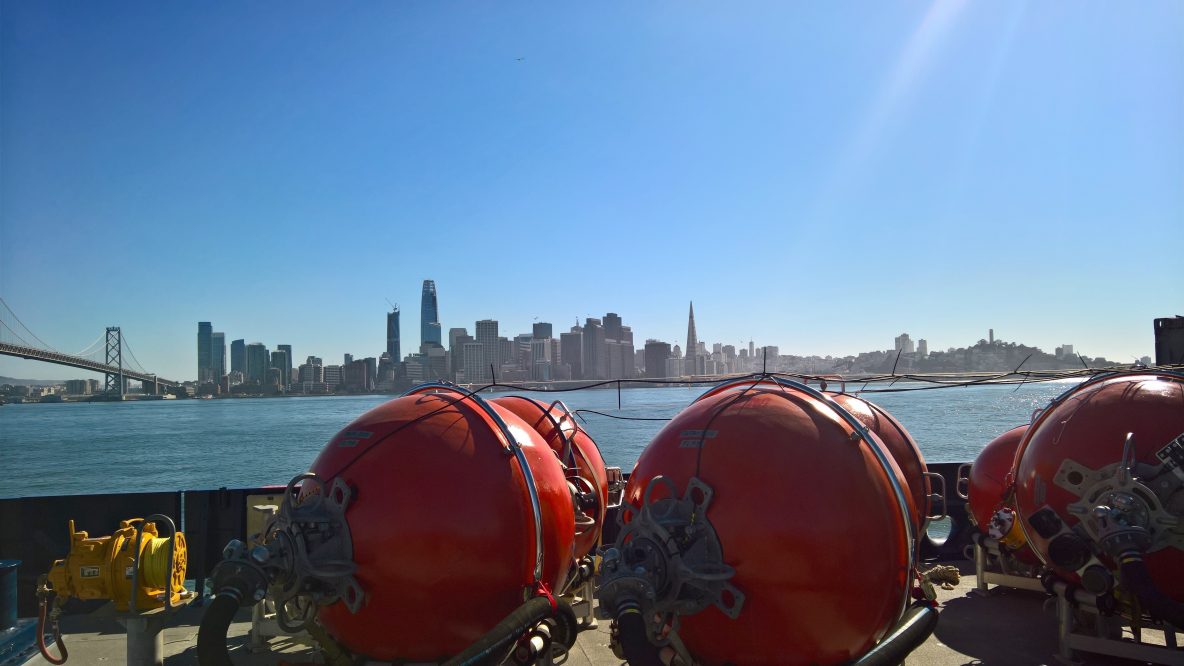 R/V Sally Ride is back out at sea after months of upgrades in the shipyard. This first research cruise has scientists from Woods Hole Oceanographic Institute and Oregon State University working on site at an array of moorings in the Gulf of Alaska to recover and deploy anchored strings of oceanographic instrumentation.

Illustration of all the equipment monitoring station Papa.
From OOI’s website.

Station Papa has been a community study site for nearly 70 years and currently supports multiple mooring strings, including a NOAA surface buoy. The OOI (Ocean Observatories Initiative) has been deploying three moorings there since 2013. Once a year, a research vessel full of OOI scientists and technicians makes the trip in order to change out equipment. This year’s trip aboard R/V Sally Ride will recover and deploy replacements of all three OOI mooring strings. All three deployments have taken place and recoveries have just been completed successfully. Each deployment takes up a whole day of work, as they are over 4,000 meters (two and a half miles!) long. They sit on the bottom of the ocean, weighed down by a 6,000 pound anchor, and reach to either 30 or 150 meters below the surface. Check out an earlier post about moorings, back when the ship was in science verification mode, for more details about how scientists use the ship’s equipment to deploy and recover instruments.

Technicians prepare to deploy a WFP, which travels part of the mooring wire
to sample at different depths. Photo by UNOLS technician Tina Thomas.

There are multiple sensors on each string, including for temperature, salinity, oxygen, fluorescence, turbidity, and density. CTD casts are taken with each deployment in order to calibrate the new sensors using those connected to the rosette frame. Water from the bottles is analyzed in the lab onboard as well. One of the moorings has two WFPs (Wire-Following Profilers, the yellow instrument in the photo on the right), each of which travels up and down a certain part of the wire, sampling throughout its assigned portion of the water column. Each mooring also has sonars to measure backscatter. The large orange spheres in the photo below contain acoustic sensors. A sound wave is produced, and the reflection recorded, from which plankton and other biological populations can be determined. These are similar to the fish finder sensor that Sally Ride has mounted to her hull.

R/V Sally Ride‘s fantail is part storage (anchors at far left) and part working deck (the anchor to be used for this deployment is in place at the edge under the A-frame) during mooring deployments. The orange spheres house sonar equipment, and the yellow ones are floats that keep the mooring string straight in the water column and bring the instruments to the surface when it’s time for recovery. Photo by UNOLS technician Tina Thomas.

With scientific work completed, R/V Sally Ride has started transiting to Newport, Oregon for offloading. It will then head south to its home port of San Diego. A busy schedule of cruises kicks off with the summer CalCOFI trip. More on that soon!