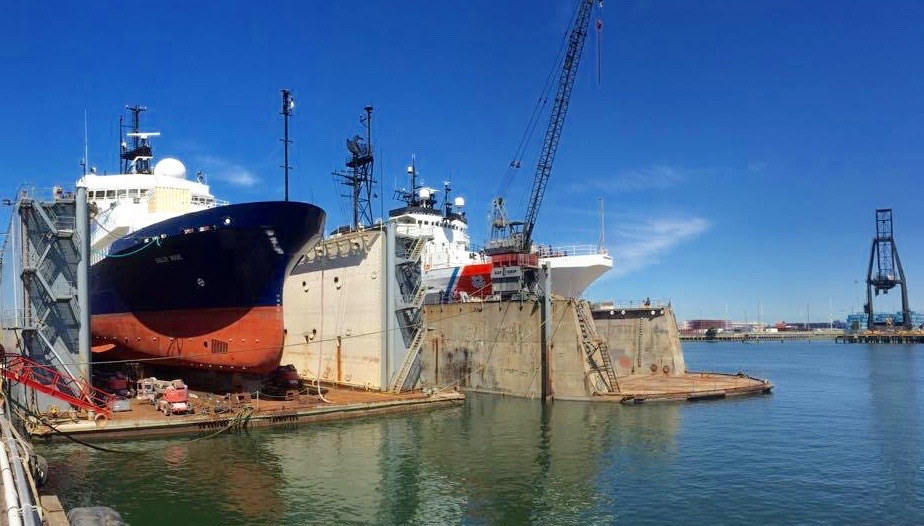 R/V Sally Ride is currently in the shipyard for some upgrades. It was always part of the plan for the new research vessels to spend a few months there at the end of their first year in service. R/V Neil Armstrong, which was delivered to Woods Hole Oceanographic Institution, has been about six months ahead in the whole construction and verification process. As such, that ship is already done with its shipyard period and back to doing science. Sally Ride will soon be ready to get to work, with a full schedule already set for the rest of the year. Up first is a research cruise scheduled out of Newport, Oregon, and then the ship will return to San Diego just in time for the summer CalCOFI trip.

R/V Sally Ride in dry dock. The propellers have been buffed and the shafts and rudders are back in place. Note the blocks under the keel.
Picture by ROV technician Doug Penny.

The ship is currently in dry dock, which means it’s out of the water. Dry docking a ship is an involved process – the ship pulls into a submerged slip, which is then raised and the water drained. Divers steady blocks underneath the keel of the ship and secure it. This makes all areas, including those usually underwater, easy to access – and the work continuing over the coming weeks takes advantage of that.

A hole is cut in the side of the ship in order to add the
additional ballast. Photo by 3rd Mate Randy Christian.

One important item on the to-do list is to add more permanent ballast. The ship is lighter than expected, and thus floats higher in the water. This can throw off the instrumentation that is mounted to the bottom of the ship, including transducers that collect data about the seafloor, currents, and animals in the water column. Over 700,000 pounds of magnetite, a type of iron, have been added into chambers on the lower decks of the ship, which should lower the ship about a foot and a half. In order accommodate this work the propellers and shafts had to be removed, which required the rudders to come off as well. While they were off, the propeller blades were buffed and are all nice and shiny again (see above photo).

Changes are being made to accommodate containers on the forward 01 deck, both for storage and lab space, which will lend more flexibility to Sally Ride‘s configuration. Currently, all containers are placed on the fantail, which is prime real estate for equipment staging and deck area for operations. This upgrade is no small task though, as the deck has to be reinforced in order to hold the weight of these containers and their contents, and sockets have to be added in order to secure them. The area in question is on top of the staterooms at the forward part of the focsle deck, including those for the Chief Scientist and Chief Mate. The entire deck will be sliced away and replaced with a new one that’s up to the task. Check out this post for pictures of that operation.

Shipyard workers wall off the opening between the wet lab and
what will become the new CTD hangar. Photo by Doug Penny.

Another big change is the addition of an enclosed CTD hangar on the starboard side. R/V Neil Armstrong got one just like it during its shipyard period and reviews are positive. Originally, the ships were designed with a rolling door between the wet lab and the deck, but reports of the wet lab getting too wet made it back from the Armstrong in time for the doorway to be patched on Sally Ride. Now that opening will be converted into solid wall, and paneling will be added to enclose the area forward of the CTD handling system (aka T-Rex arms). So CTD casts will still be deployed and recovered in the same way, but now the frame can easily be moved into a hangar, which makes sampling easier and more safe.

There are also some changes being made for the comfort of crew and scientists aboard. One such example is that the opening between the galley and mess will be made larger. Lowering the bottom of the opening will allow shorter people to be able to reach salad fixings that are in the back row. And raising the top will make it so that taller people don’t whack their head every time (see Twitter pictures below). I was glad to hear of this plan – I am an average 5’7″ but have both hit my head and not been able to reach the snap peas.

Restech Keith runs cable on the 02 deck, also referred to
as the Hobbit deck, a low space just beneath the bridge.
Photo by Doug Penny.

Sally Ride will get a fresh coat of paint on those usually hard to reach areas – underwater and the freeboard (area from the waterline up to the main deck). There will also be upgrades to various pumps, drains, vents, tanks, and valves all over the ship. Once she emerges from the shipyard later this summer, R/V Sally Ride will be better equipped than ever to perform the numerous tasks that science parties require, including deployments and recoveries of myriad gear and top-notch sensor data collection. Scripps Institution of Oceanography is lucky to have such a workhorse in the fleet!

Check out these posts for more pictures from the shipyard

Back to the Shipyard

Acoustic array recovery, step 6: finish in time to make it to lunch for carnitas! pic.twitter.com/JOMkZwqH5X