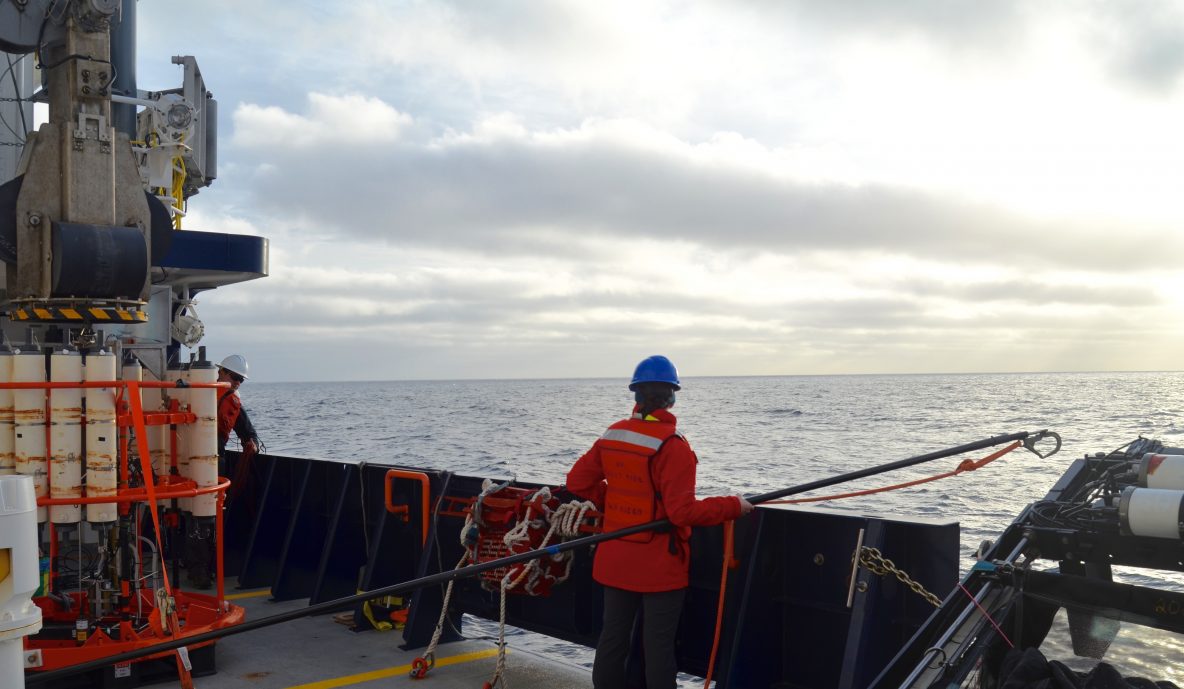 Onboard R/V Sally Ride, and in oceanography in general, a lot of sensors are used to collect information. In order to check that inferences made are backed up with data, ground-truthing is required. 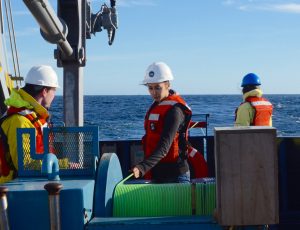 Grad students deploy a hydrophone to listen for marine mammals,
while others scan the horizon for spouts and splashes.

On leg 1 of the current cruise, scientists used passive and active acoustic sensors to determine the density of animal populations. There are sensors attached to the bottom of the ship, as well as on lines that are anchored to the seafloor, with instruments throughout the water column. These moorings collect data for months at a time, and are more likely to observe “normal” animal behavior, as schools of fish and other animals may act differently when the ship is near them.

Observing actual specimens is needed to be sure that the conclusions made using sensor data are correct. Net tows are performed, including a MOCNESS that samples throughout the mid-water column and a manta net at the surface. Visual surveys were conducted during daylight hours, with a student outside watching for whale spouts and dolphin splashes. Meanwhile, another student was in the lab listening live to a hydrophone array being towed behind the ship. Matching up the sounds and visuals in this manner will help the team identify recordings from the hydrophones that are attached to the moorings.

The surface buoys and moorings that were recovered and deployed on leg 2 housed dozens of instruments, which are calibrated before and after spending months in the ocean. Other sensors, either mounted on the ship itself or 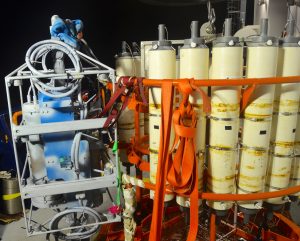 A cage of instruments that will be attached below the buoy is first
sent down attached to the CTD frame in order to calibrate the sensors.

connected to the CTD rosette frame, are used. Knowing any offset between sensors is a start, but water samples from various depths were also collected on CTD casts. These will be analyzed back on land for salinity, dissolved oxygen, and nutrients in order to double-check the sensor data.

Sensors mounted to and deployed from R/V Sally Ride are an invaluable tool for scientists, collecting data for long periods of time with little supervision. But the extra step of ensuring their accuracy is necessary. On this cruise, scientists who rely on sensor data spent hours confirming their data is the best it can be. The ship has the latest and greatest sensors and instrumentation, and the crew is practiced in safe and efficient deployments and recoveries, so it was a productive trip.