Dr. Uwe Send’s lab group at Scripps Institution of Oceanography consists of grad students, scientists, technicians, and engineers that fabricate, maintain, deploy, and recover instruments all over the world. This week they’re on R/V Sally Ride recovering a mooring, and deploying a new one in its place. This one is attached to a surface buoy, unlike the other mooring operations done on the ship so far which have been completely underwater. Click here to see a 360 degree photo of the buoy recovery.

The buoy was hooked from the starboard side and then recovered over the A-frame. Hours later, instruments along the 770 meter long line were still being brought onboard.

During recovery, the instruments near the surface came up with a lot of marine life attached to them, called bio-fouling. They are coated with a paint designed to discourage growth, but it doesn’t stop it entirely. Over the course of a few hours, the entire string of instruments was brought onboard. Data was downloaded from the various sensors, and the replacements were fully tested before deployment. A CTD cast was done in the vicinity just before or after each operation. The data collected from sensors attached to the rosette frame will be used to calibrate the data coming in from similar sensors on the buoy and mooring.

An instrument cage before deployment (left), and after it’s been underwater for a year.

The mooring is at a strategic site in the zone studied as the California Current Ecosystem by the Long Term Ecological Research project. Dozens of sensors are attached, from the top of the buoy to near the seafloor 770 meters below. Some transmit data back to computers in the lab while others have to wait for recovery to have their data downloaded. There’s wind, rain, temperature, humidity, and light sensors on the buoy itself, along with a GPS beacon, AIS (automatic identification system, which shows up on ship radar), and a flashing light. Below the surface are sensors for dissolved oxygen, pH, salinity, temperature, nitrate, carbon dioxide, light, and water current, along with hydrophones and active acoustic devices that collect information on the density of animal life. 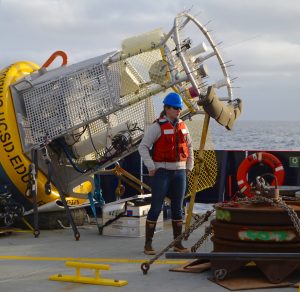 Sensors are secured in the top ring of the buoy, as well as
through the cage and down into the water column.
The anchor is also visible in the bottom right.

The deployment takes place top to bottom, with the buoy first in the water. It is towed behind as the ship moves slowly (0.5-1.5 knots) and the other instruments are attached to the line. Last to be deployed is the anchor, in this case a stack of train wheels weighing 1700kg (~3700lb).

These moorings are a joint effort between multiple groups at Scripps and NOAA (National Oceanic and Atmospheric Association), an entity vital to studying the health of the planet. Each group contributes some of the instrumentation, manpower, ship time, and data processing in order to make the effort successful. The goal is to have long-term uninterrupted data about the condition of the ocean, from seafloor to just above the surface. All operations on this trip were a success, thanks to the crew and science party onboard R/V Sally Ride.

This project is made possible with funding from the NOAA Ocean
Acidification Program and the NOAA Climate Observation Division (COD),
as well as funding from the National Science Foundation (NSF) trough the
CCE-LTER program. Additional contributions are coming from U.Send’s lab,
the PMEL Carbon group, the NOAA Southwest Fisheries Science Center and
from all collaborators. The initial year of the mooring program was
supported also by the NOAA National Marine Fisheries Service (NMFS), the
UCSD Academic Senate and UC Ship Funds. Any findings expressed here are
those of the author(s) and do not necessarily reflect the views of the
funding entities.