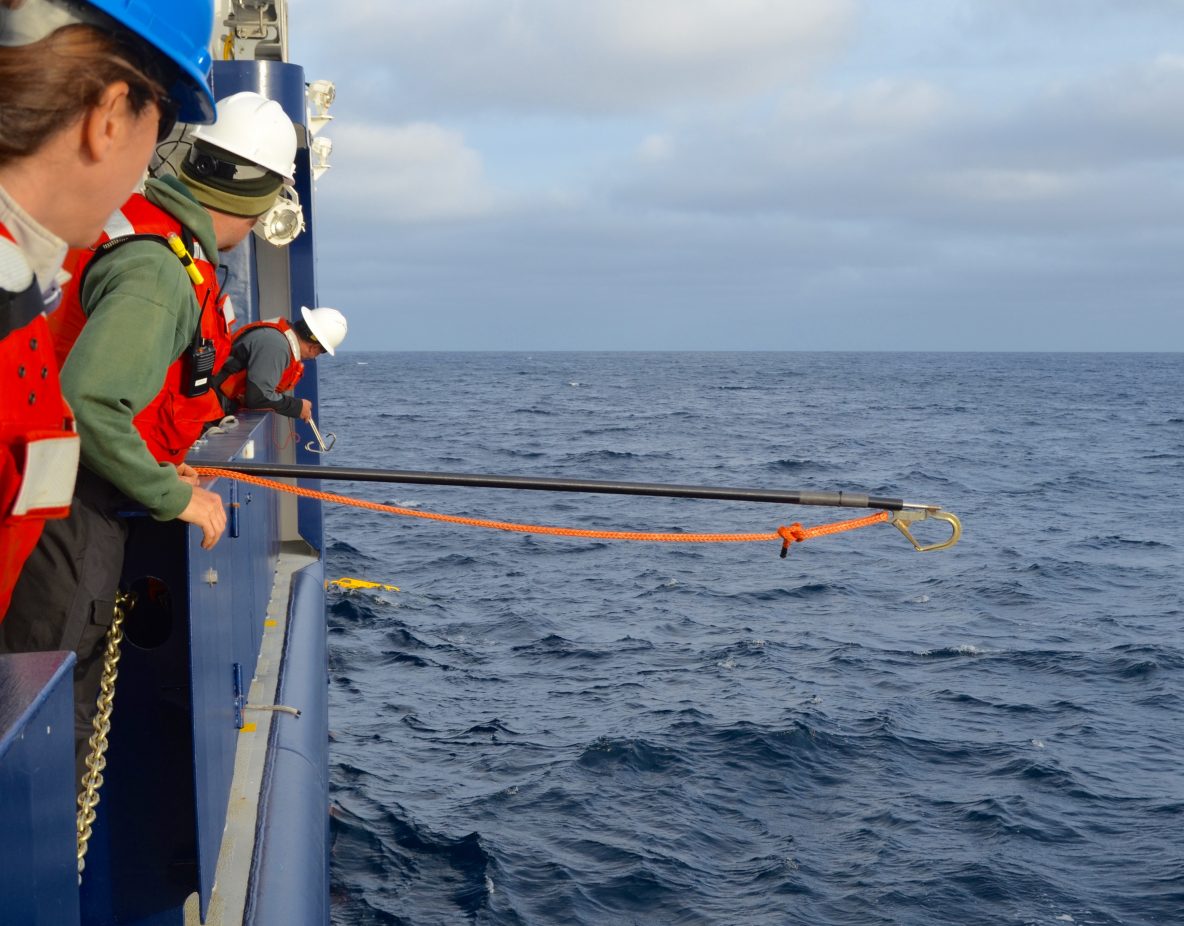 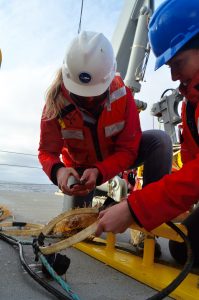 Simone and Jenny recover a hydrophone,
which will be cleaned off, tested, and redeployed.

Sometimes when R/V Sally Ride leaves port in San Diego there’s a long transit to the first station and the science party gets some downtime (the crew is always working). Not so on this trip – within 3 hours the fantail was crawling with scientists ready to deploy a mooring in the San Diego Trough. Within 24 hours, two moorings had been deployed and another recovered. Each string of instruments is anchored to the seafloor with an old train wheel. Just above that is a release mechanism that communicates with a deck box that looks like a briefcase but opens into a display and keypad like something out of a spy movie. A signal is sent out using a transducer lowered over the side of the ship, and everything above the anchor is detached. Within a matter of minutes, the gear is all at the surface and can be brought onboard using the ship’s A-frame.

Dr. Simone Baumann-Pickering is Chief Scientist onboard R/V Sally Ride this week. She, along with Dr. Ana Širović and students and technicians from their labs, use sound traveling through the ocean to study animal populations off the coast of Southern California. They use devices that collect data from both passive and active acoustic recordings to learn about everything from krill to whales. Passive acoustics uses hydrophones strapped onto lines throughout the water column that record sound, whether that’s dolphin whistles or ship traffic. Active acoustic studies use instruments that send out a ping of noise and records the time and angle of return. In this case, 70 and 200 kHz signals are sent out, which provides data on the density of prey species such as krill and small fish. Both kinds of instruments can be attached to the same line of rope that is anchored to the bottom of the ocean, held upright with the use of floats. 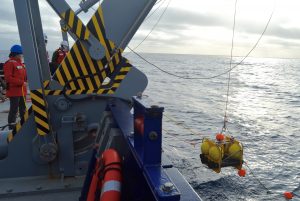 The HARP is recovered using the ship’s A-frame.

In addition to the moorings that were deployed, a HARP (high-frequency acoustic recording package) was released from its anchor and recovered. It was originally deployed a year ago, but the batteries only last about 10 months. The data was downloaded, and all-new equipment was loaded up and deployed at the same site. The HARP includes only one hydrophone that floats a few meters above the seafloor. Dr. Širović’s lab will use this data to track ambient noise from nearby shipping lanes over time.

Nets will are used to collect biological samples in order to check the inferences made using sound recordings. More on that in a separate post.

Our multi-instrument mooring goes in near the San Diego Trough. Off to a good start with @RVSallyRide! pic.twitter.com/MDwOmOLk3A