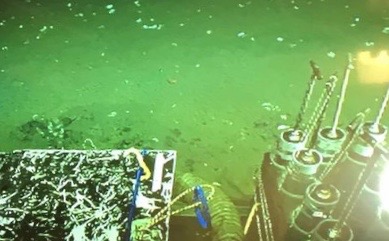 In 2012, a methane seep was discovered by a group of SIO graduate students on a UC Ship Funds research cruise onboard Scripps’ now-retired research vessel Melville. SIO’s ROV Trident was used to take video of the site as well as collect samples from the seafloor. Now called the Del Mar Seep, it’s the first of its kind to be studied off the coast of San Diego. R/V Sally Ride returned to the site last month, this time with WHOI’s ROV Jason onboard. Part of a science verification cruise, the main goal was to test the ship’s capability to carry out ROV operations, following a science plan that included visual surveys of the Del Mar Seep, as well as the collection of samples and retrieval of experiments left on the seafloor back in 2012.

The site sits in 1,020 meters of water about 30 miles off the coast of Del Mar. This area of the continental shelf doesn’t generally have a lot of biomass – it’s in the oxygen minimum zone (OMZ) where life-supporting dissolved oxygen in the seawater is very low, allowing only species with adaptations to thrive there. Living in the sulfuric environment around a methane seep requires adaptations as well, leading to added diversity by supporting bacterial life which in turn supports a food web of sponges, snails, worms, crabs, clams, and fish. There is a dramatically increased density of life in a roughly 200 meter radius from the seep site than in the surrounding area. One push core collected in 2013 was used to estimate that over 16,000 animals, mostly worms, live in one square meter at this site! 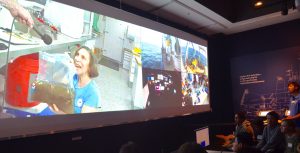 Dr. Lisa Levin shows a seafloor sample from the Del Mar Seep to junior high school students assembled at the Birch Aquarium.
The week-long cruise was live broadcast via internet thanks to the Inner Space Center at the University of Rhode Island.

Back in 2012, pieces of wood and carbonate rock (similar to limestone) were left on the seafloor, both at the seep and at an inactive site 1 kilometer away. ROV Jason retrieved these pieces and the growth on them will be studied to determine how the life in each area colonized the different substrates over the course of four years. They will also be compared to similar experiments at other seeps along the west coast in order to determine similarities and differences of the Del Mar site.

Research done at the Del Mar Seep since its discovery in 2012, including the recent trip using R/V Sally Ride and ROV Jason, will lead to a better understanding about the ecology of methane seep environments. The density of fish found around methane seeps has led them to be associated with conservation efforts targeting over-fished species such as rockfish in order to help the commercial fisheries rebound long-term. Maintaining the protection of areas that would be destroyed by trawling (dragging nets across the seafloor) will help the sustainability of such fisheries.

For more about the Del Mar Seep expeditions, check out these links

Cruise website with more about the scientists involved and blog posts from the expeditions. Check out the mud murals!

Journal article detailing the ecology of the Del Mar Seep