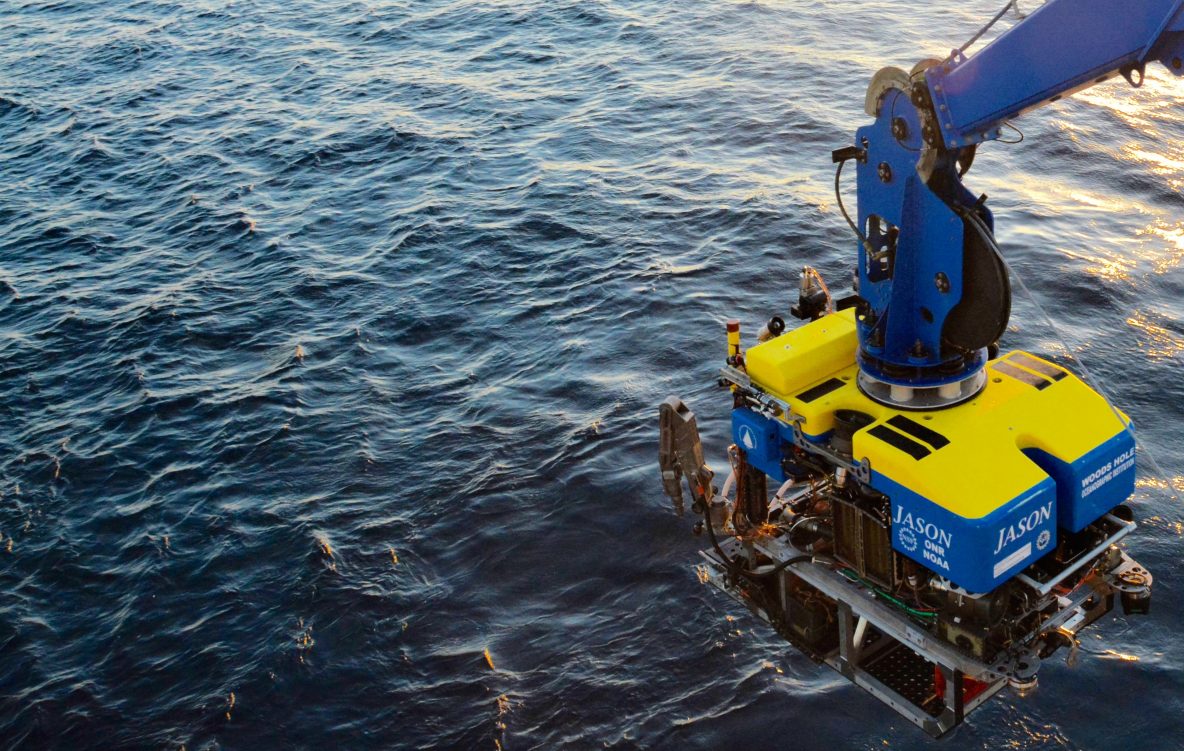 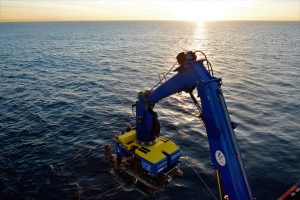 During last month’s cruise aboard R/V Sally Ride, an ROV named Jason (after the Greek mythological hero and explorer) was deployed in order to test the ship’s capabilities, performing scientific operations under the direction of Scripps scientists. Labs at the Institute of Geophysics and Planetary Physics (IGPP) at Scripps study seismographic data from the ocean floor using tiltmeters to measure vertical changes, if an area is sinking or rising as in near a volcano, and strainmeters that measure the changing distance between two points, as in faults after an earthquake. Much of the seafloor is made up of mud, not exactly the ideal substrate for attaching this type of sensitive instrument. Measurements down to one micron (1 millionth of a meter) are detectable, so a better anchoring system is key to collecting better data. Dr. Mark Zumberge and other scientists from IGPP, including Jon Berger, John Orcutt, Jeff Babcock and Martin Rapa, used ROV Jason to test three new setups that could be used to hold their instrumentation in place.

Views from the ROV’s camera feed, showing the elevator on the seafloor. 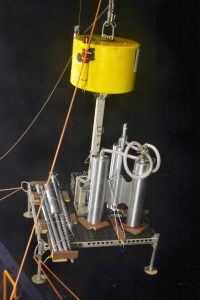 The elevator, loaded with gear, is deployed over
the starboard side. The yellow float keeps it upright
as it sinks. Picture by Kirk Sato.

The ROV Jason only has a small amount of spare room to bring gear along on its dives, so a piece of equipment called an elevator was used to lower the gear for the anchoring tests to the seafloor. Everything was loaded and secured onto the platform while it was still aboard Sally Ride, and then the whole setup was deployed off the side of the ship, sinking to the seafloor. For an understanding of the scale of this equipment, see the embedded tweet below which shows Scripps Associate Director Bruce Appelgate standing next to the elevator while chatting live a group of middle school students at the Birch Aquarium. Jason was deployed from the back deck, and piloted down through the water column. Its arms were then used to unsecure and handle the gear sent down on the elevator.

The three new types of attachments were then tested using the ROV. Jetting involves drilling a hole with high-pressure water in order to submerge an instrument. Suction anchors use negative pressure, and auger anchors involve screws, in this case 7 feet long, connected to a steel plate to which sensors could be attached. Currently, concrete slabs with instruments attached are lowered to the seafloor. Any or all of the SIO-designed alternatives tested using ROV Jason could allow for more reliable data – by inserting sensors into the muddy substrate or attaching them to fixed anchors.

Cameras onboard ROV Jason capture the suction anchors being tested. Negative pressure is created so that the anchors sink
into the muddy seafloor.

The science verification cruise proving R/V Sally Ride‘s ability to host ROV Jason and others like it was a success. There were many science goals carried out in conjunction, allowing SIO researchers to visit sites and test equipment that they may not otherwise have gotten to. These seafloor anchor tests will help researchers at IGPP design and deploy instrumentation better suited to collecting important seismographic data off the coast of San Diego, and around the world.

Telepresence from the Ride- Bruce Appelgate talks live to an audience of middle school students @Birch_Aquarium about the technology onboard pic.twitter.com/aqggat7iHC