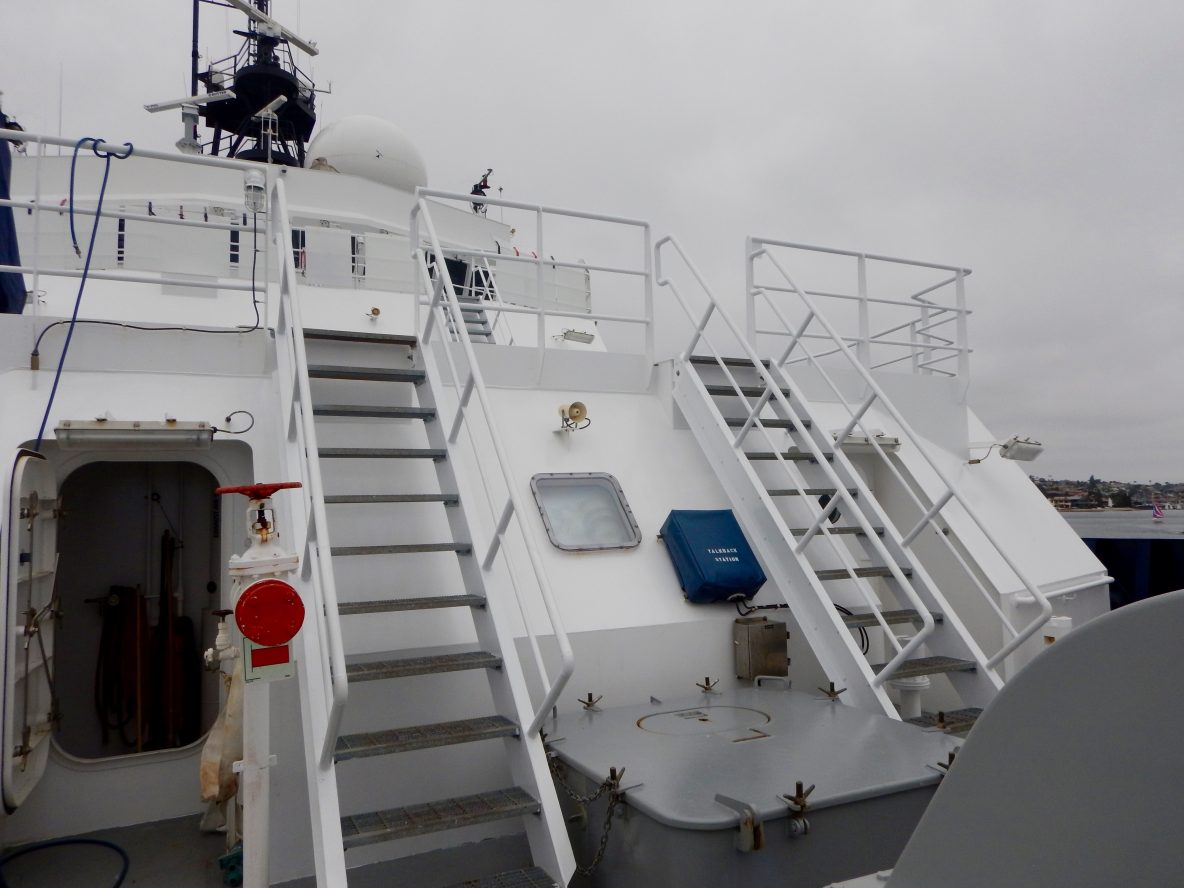 R/V Sally Ride has successfully completed two science cruises since leaving the shipyard last month. The first involved visiting a research site in the Gulf of Alaska in order to switch out long-term moorings. That cruise off-loaded in Newport, Oregon and the ship then headed to San Diego. Multiple Scripps technicians were onboard for the transit south in order to tie up loose ends (in some cases literally) and get the ship ready for the demands of a CalCOFI cruise. The seasonal trip fills the ship’s staterooms and labs with scientists and uses pretty much every capability – from underway sampling to deployments to sonars. And on this cruise, Dr. Uwe Send’s group also loaded up a buoy and other instruments as part of an opportunistic mooring deployment. So it was a very full ship!

The new main lab setup. For pictures of the lab before the shipyard changes,
check out this post http://go.ucsd.edu/2xd27W2

You may remember that the CalCOFI group was also aboard Sally Ride for their fall trip last November. So they were able to compare the ship as it was then, after just a few science verification cruises, and now, after the shipyard period. What made the most difference to them was the reconfigurable lab spaces. Gone are the rows of narrow tabletops with cabinets above and below, replaced with custom-made easy to move nesting tables of varying sizes and heights. They come with the extra perk of storage space underneath and it’s a necessity at sea that everything be easily secured. The tables bolt into the floor, the lab has holes every two feet in a grid pattern, and gear can be screwed into the tabletop or strapped to the frame. “The new tables are great!” says CalCOFI Chief Scientist Jen Wolgast, adding that it made it much easier for the various groups aboard to have the work areas that they needed while sharing limited space. “It’s nice to be able to get to all sides of the tables, it lets people move around easier,” said LTER scientist Shonna. I’m glad to hear that the new lab setup is working well, and can’t wait to see how each science party customizes it.

The forward area of the wet lab, now with a watertight door leading
out onto the deck near the CTD sampling area. Note CalCOFI’s famous
espresso setup – they know how to live.

The wet lab also got an update. As outlined in a previous post, the name was a bit too literal at first. Sister ship R/V Neil Armstrong was first out of the yard, and reported water making its way into the wet lab through the rolling door connecting it to the starboard working deck. Now, that door has been converted to a solid wall and instead there’s a watertight door that leads from the forward part of the wet lab out onto deck. Chief Scientist Jen Wolgast reports, “We used the door from the wet lab to help with landing the CTD, it’s in the perfect spot to assist with getting the rosette right where we need it in order to sample all the way around.”

The forward 01 deck also got reinforced so that containers can be housed there, both for storage and additional lab space. This was quite an undertaking in the shipyard, and there are dramatic photos of the transformation in a previous post. A second ladder (stairway, see header photo) was added from the forward focsle deck, so that there’s still easy access no matter where the containers are placed. No science group has needed that extra functionality yet, but you can be sure that once they do, you’ll see pictures of it here.