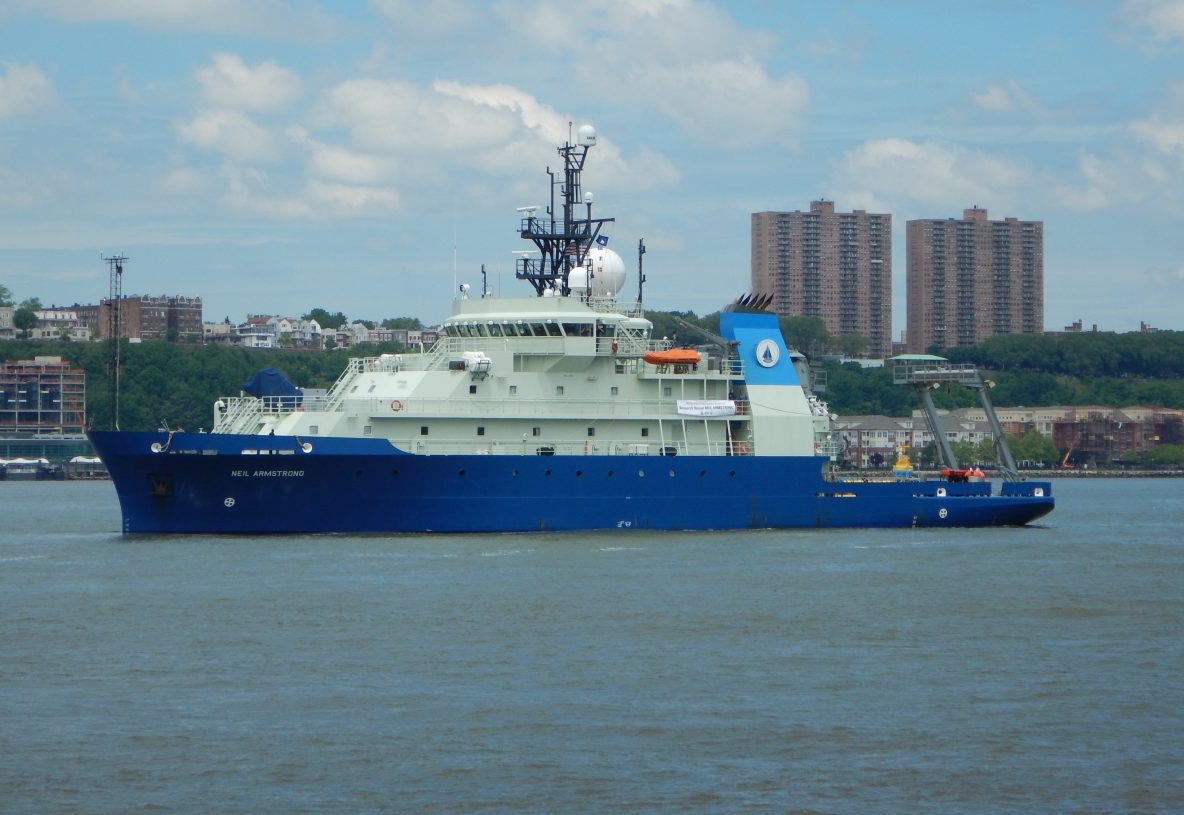 The view from the fantail of R/V Neil Armstrong. Active amphibious assault ship USS Kearsarge and four YP (yard patrol) boats are tied up in the background. Midtown Manhattan looms in the fog. The oceanographic equipment in the foreground includes a REMUS autonomous vehicle outfitted with SharkCam. Check out amazing footage, and see how it got those scratches, here http://www.whoi.edu/remus-sharkcam/hunterandhunted

I recently took a vacation to the East Coast, but couldn’t fully separate myself from R/V Sally Ride. Her sister ship R/V Neil Armstrong participated in New York City’s Fleet Week, so I got to see it as part of the Parade of Ships. It came down from Woods Hole, and lined up with aircraft carriers, destroyers, and other Navy ships to travel up the Hudson River, from the Statue of Liberty to the George Washington Bridge (see Twitter photo below). It then tied up at Pier 86, home of the Intrepid Sea, Air & Space Museum. Among other things, this museum showcases a retired aircraft carrier (USS Intrepid) and the space shuttle Enterprise, which was used only for test flights. Neil Armstrong was open for public tours during fleet week, and I jumped at the opportunity to scope out the differences between it and Sally Ride.

Neil Armstrong’s Medal of Honor is displayed on the bridge
of WHOI’s research vessel bearing his name.

Fundamentally, of course, they’re the same, and were made in the same shipyard. But there were some noticeable differences in how the crew and technicians that live and work there have set up their spaces. What on the Sally Ride is used as the electrician’s shop is assigned instead to the restechs on Armstrong, and their computer lab is more open lab space, instead of the server racks and desks for technicians on Sally Ride. The paint job is an obvious difference, with Armstrong’s house being a bit green instead of white. Officially it’s azure green, but is often referred to as “WHOI green” and has been used on all their modern research vessels. The memorabilia onboard is of course from a different famous astronaut, the first person to walk on the moon. Neil Armstrong’s Congressional Medal of Honor is on display on the ship’s bridge. The ship also has the fortified 01 deck and CTD hangar currently being installed on Sally Ride already in place.

Another stop along the way was Washington, D.C., where I spent most of a day at the National Air and Space Museum. Always a favorite amongst the Smithsonian Institution’s amazing offerings, it houses a mind-boggling amount of vehicles and artifacts from throughout the history of flight. This includes some of Sally Ride’s personal effects, which were donated by her partner Tam O’Shaughnessy. The flight suit she wore on her first shuttle mission is there, complete with patches and the simple ‘Sally’ name tag she chose to wear. Displayed alongside it is the flight suit of Dr. Guy Bluford, the first African-American in space. Both historic trips took place onboard Challenger in 1983.

An interactive exhibit at the Air and Space Museum, where kids are encouraged
to move each shuttle through its history-making lifetime of missions.

Sally Ride’s legacy, and that of the space program in general, will endure forever, and it’s an honor for SIO and WHOI to be a part of it. When Sally Ride returns from shipyard, there will be a display of memorabilia added, including a flight jacket similar to the one above, as well as the Presidential Medal of Freedom awarded posthumously in 2013 by Barack Obama. Look for more on this in a future post!