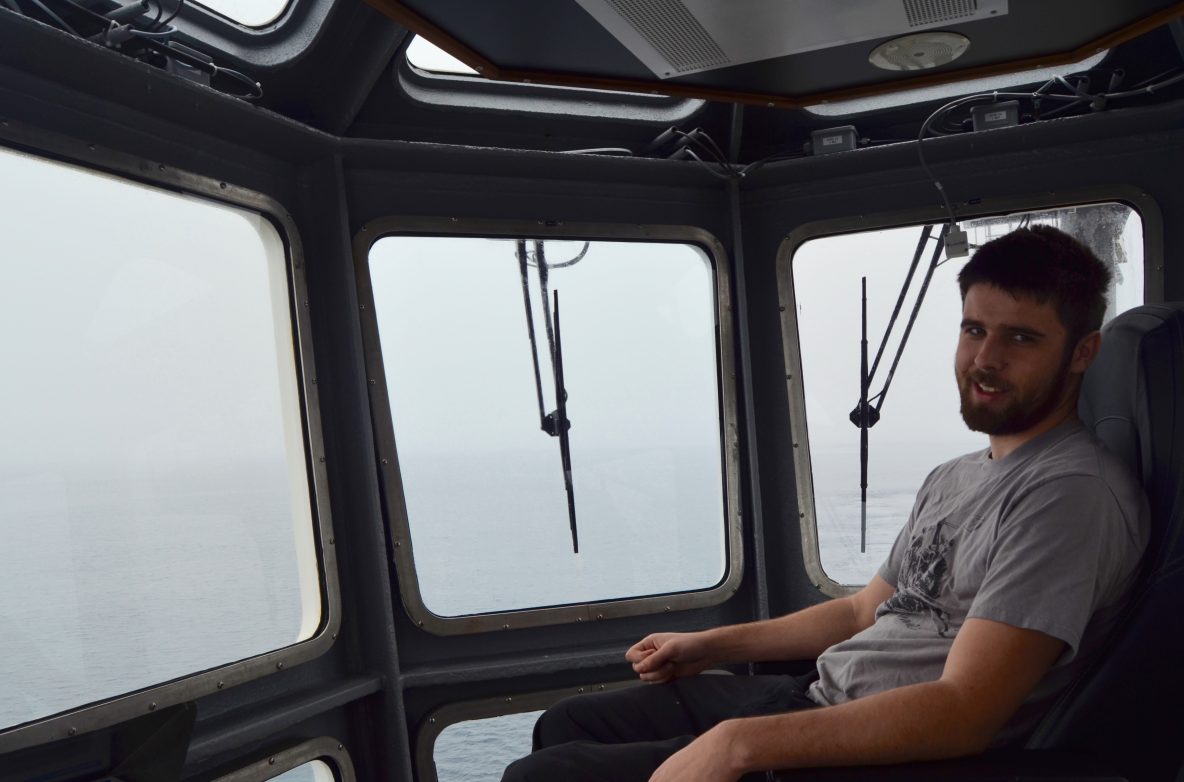 “Sometimes it feels weird to be home. And when I get back to the ship, it just feels normal again. I really do enjoy going out to sea. I used to get homesick, but I’m glad I stuck it out. I actually found a job I enjoy.”

Adam can usually be found in the electrician’s office just outside the lab.

Adam Goodbody has always had the skills and inclination to be an electrician, even helping his dad rewire the house as a kid. His uncle, a tanker captain and former SIO Chief Mate, suggested that he work at sea so that he could also see the world. So for the last three years, that’s exactly what Adam has done. Right out of high school, he began as an OS (ordinary seaman, see post about that job here) on the now-retired Melville. He then worked his way from wiper to oiler (see post about those duties here) in the engine room of R/V Roger Revelle. The Chief Engineer there knew he was interested in becoming an electrician, and made sure he learned those duties when he had time. Adam was then sent to R/V Sally Ride as day oiler while the ship was still in the shipyard in Anacortes, Washington. There, and on many of the science verification cruises, he trained under Manny, a long-time electrician on Scripps ships. And now the training wheels are off and Adam has been sailing as ship’s electrician for the last few months.

Coming aboard a brand new ship and learning about the electrical systems was a trial by fire experience (though thankfully not literally). As Adam says, “You start the engines from a screen, there’s no manual way to do it. The fact that everything is electronic on this ship means that my job is that much more important.” And he’s not overstating things, pretty much every component in every space falls under his purview. When things are running smoothly, he’s studying diagrams in anticipation of the day that something important breaks. “That’s my biggest fear. I want to have a basic understanding of everything on the ship before I have to fix some major problem. So I study constantly…and I hate studying.”

Adam at work, taking things apart and putting them back together.
This is his patient face, just after I made a joke about cutting the red wire.

There are hundreds of these diagrams, and he showed me a few. To me, it just looks like a confusing jumble, which Adam assured me is normal. “It all looks like a bunch of jumbled up lines when you just look at it, but all you have to do is find a line and focus on it and you can tell where and what it is. There’s switches, junction boxes, but it’s not as complicated as it looks.”

Adam works a day shift. His morning rounds begin on the bridge and take him six decks down to the engine room. He checks on the lights and alarms all over the ship, as well as any equipment that’s plugged in outside on the decks. He also monitors the load on the ship’s UPS (uninterruptible power supply), which protects lab equipment from power surges and supplies a charge even if the main power is lost.

The electrician is also treated like the ship’s resident MacGyver. If a scientist lingers sheepishly in the hallway outside the electrician’s office, you can bet that something has broken and they need help. I have definitely brought nonfunctioning instruments to them, putting on my nicest voice, and opening with “Hey…so, I have this problem…”

Adam trained AB Natasha and day oiler Dave on the operation of the winches, which run
the spools of cable or wire that scientists attach their instruments to before lowering them
into the ocean. I tried to sneak up on them to get a natural photo, but was noticed.

From waterproofing crates to soldering a circuitboard, from removing water from a winch on the back deck to fabricating Teflon pieces, or if the carburetor on your remote controlled kayak has stalled – Adam has seen it all and can probably help. Or give him a few minutes and he’ll catch up. Science parties try to bring everything they might possibly need (or at least they ought to), but if you forget tape, the drawers in the electrician’s office have like 12 kinds of tape, along with zip-ties (all sizes!), rope, screws, you name it. When asked what his favorite tool onboard is, Adam says, without hesitation, “…the sledgehammer. I’ve found there’s a lot of situations where it does the job. A few good smacks.”

During his downtime on the ship, Adam shows up to game nights (see Twitter picture below), watches movies, and gets as much sleep as he can. Like many crew members, he extolls the virtue of having his own room. On Revelle, he had to change rooms often, moving in and out of other people’s rooms based on their schedules. Despite this, he says he’d be happy enough to go back to that ship, and says “It’ll be cool to see Revelle come into San Diego. I kind of miss that crew.” The ship just arrived into its home port for the first time since 2012, and will be working along the West Coast for the rest of the year.

Adam in the ship’s engine room.

Adam’s preferred schedule is to work about eight months a year, though this year he’ll only get two months off. When asked what he’ll do with that down time, he says, “I don’t have the full year with my friends and family, so I spend time with them. I enjoy whatever holidays I get at home. It’s not the same at sea – you still work your full day, though there’s usually some sort of treat from the galley.”

Down the line, Adam is interested in becoming an electro-technical officer, adding programming and networking knowledge to his skill set. There’s always work on drilling rigs in the Gulf of Mexico, where the money is astronomical. But he plans to remain aboard R/V Sally Ride, keeping the ship running smoothly so she can travel the world doing science. There’s still a lot he can learn onboard Scripps research vessels, and he’s eager to do just that. “I largely attribute why I enjoy working with Scripps to the crew. Any time I want to learn something, it’s not difficult to find a teacher in the crew.” Research cruises have taken him to nine foreign countries already in his short career, and Adam says that is a huge draw, “The adventure keeps me coming out.”

Another game night happening tonite in the mess! We unwind out at sea w/ #cribbage #scattergories #yahtzee #scrabble https://t.co/qxv8h8R1S2 pic.twitter.com/EXhujmw3uJ