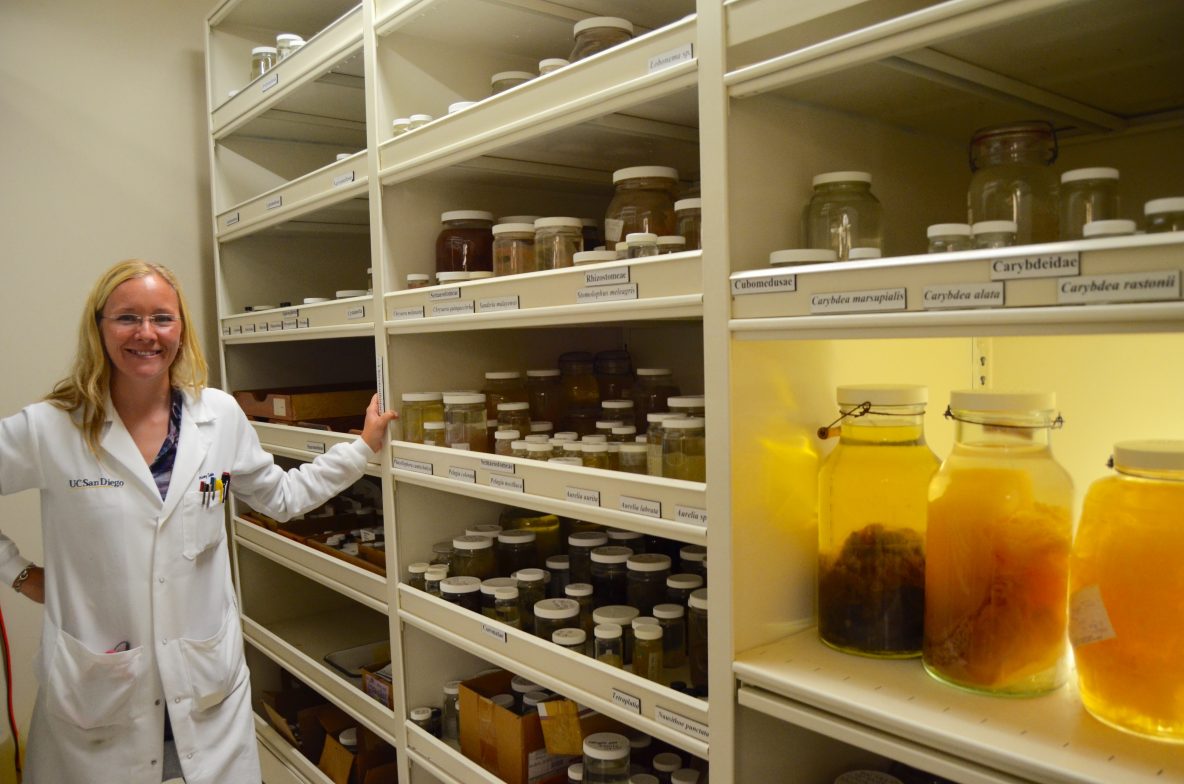 Scripps Institution of Oceanography is home to some of the preeminent biological and geological collections in the world, which are important repositories for samples from around the planet. On a recent R/V Sally Ride research cruise, biological samples (animals, in this case zooplankton) were collected using two different types of net systems and then sorted for various experiments by scientists onboard.

Linsey (orange pants) works with the Ohman group to collect and process
samples from the MOCNESS (frame on the left, cod ends on the right).

The manager of the Pelagic Invertebrate Collection, Linsey Sala, was onboard to help with the work. The trip was only a few days long, which kept the team constantly busy. She assisted with the bongo net tows to collect and sort live specimens, which were used by the Barbeau lab for their trace metals experiments. She also worked with the Ohman lab to collect samples from all ten of the nets that make up the MOCNESS. It’s a long process to rinse down each net into its basket, called a cod end, making sure to carefully retain all the plankton. The sample is then transferred to a bucket and hauled into the wet lab to be processed and preserved, but that’s just the beginning of the work. Training students to properly collect, preserve, and store the samples is part of Linsey’s job when she’s at sea, as well as identifying pelagic organisms. However, she was never too busy to answer questions or show off a particularly cool specimen magnified under a microscope (see pictures below). She has a seemingly encyclopedic knowledge of marine invertebrates and speaks in taxonomic terms, some of which I remember from my undergrad biology classes, but most of which I’ve since looked up. Instead of krill, worms, and jellies it’s euphausiids, chaetognaths, and scyphozoans.

In order to learn what happens to the samples once the ship returns to land, I recently visited the Pelagic Invertebrate Collection. Pelagic invertebrates are animals without a backbone that live in the water column, as opposed to bottom-dwelling, or benthic, invertebrates – which have their own separate collection at SIO. In the pelagic collection alone, there are over 137,000 sample jars, comprising more than a billion individual specimens. Tens of thousands of boxes filled with sample jars are vigilantly labelled (Linsey is clear that this is one of the most important parts of her job) and stored in earthquake-safe compact shelving. Included in the collection are thousands of reference specimens, kept on behalf of scientists who are considered experts in certain identified groups of marine invertebrates. Thanks to a generous donation, the collection is also home to a huge variety of nets, as different lengths, openings, and mesh sizes are optimized for sampling different types of organisms.

In the collection, Linsey ensures every sample jar, lid, and case
are properly labeled so specimens can be easily found.

As Museum Scientist and Collection Manager, Linsey is the main person working in this massive facility. With help from the curator, Dr. Mark Ohman, and an undergraduate assistant, she keeps up with cataloging the ever-expanding collection, responding to loan and species identification requests, providing specimens for SIO classes, and giving tours. A set of particularly interesting samples make up a small museum ready to be shown to visitors, housing everything from a 5-foot long Humboldt squid to Antarctic krill to larval lobsters.

Linsey fields many requests from scientists all over the world to use samples from the collection. Many papers are published every year by researchers looking at the samples for their own purposes. When SIO graduate students, led by Miriam Goldstein, began to study the so-called garbage patch in the North Pacific Subtropical Gyre, they were able to analyze samples collected on CalCOFI cruises dating back to the early 1970s. Evidence of microplastics in these samples, as well as those collected on a research cruise conducted by the students in 2009 on R/V New Horizon, was the first definitive study of its kind that led to a deeper awareness of the dangers of plastic pollution in the ocean. Learn more here. As Linsey says, “While each expedition’s samples are collected with a specific focus, it’s always very exciting when we use archived materials to address a new hypothesis and continue to learn more about our oceans from these resources. Each sample is a unique snapshot in time of that window of the ocean that can answer a multitude of questions – some of which we haven’t even thought of yet.”

(Left) Pregnant female copepod Euchirella pseudopulchra, eggs are blue, (middle) amphipod, an order of small crustaceans, and (right) a female
copepod of the family Pontellidae. Each animal is only a few millimeters in length and was photographed on the cruise using a microscope.
Photos thanks to Linsey Sala of the SIO Pelagic Invertebrate Collection.

Most samples are preserved in formaldehyde, which maintains the characteristics for visual species identification. Others are stored in ethanol, which keeps the DNA intact and can be used for genetic analysis. You may remember that on CalCOFI cruises, the sample from one side of the bongo net is preserved in each solution so that both methods can be used. The NOAA fisheries group that participates on those cruises takes the samples back to their lab first and sorts them. They keep the fisheries-related species – fish eggs and larvae, young cephalopods (squid, octopus), and lobster phyllosoma larvae (a specific stage in their life cycle). The rest of the sample is brought to the SIO Pelagic Invertebrate Collection.

Just one of dozens of shelves full of pelagic invertebrate samples.

On the day I visited, Linsey cheerfully rolled shelving units open to show me everything from the samples we collected on the recent Sally Ride cruise all the way back to the first CalCOFI trip in 1949. This time series data is an invaluable record of the ocean as it changes over seasons, years, and decades. When talking to her, it’s obvious that Linsey is inspired by the breadth of the collection, even though it means never-ending work for her. “These types of scientific natural history collections provide the opportunity for scientists and our community to study environmental health, our natural resources as it relates to fisheries science, climate effects on ocean ecosystems, and can provide materials for emerging technologies. Archiving and maintaining these well-preserved specimens allows us the possibility to access information from our past and present to better predict and direct our future.”

As mentioned in a previous post, the scientists on the cruise collected samples concurrently with zooglider operations nearby. This autonomous underwater glider was developed at Scripps by the Instrument Development Group, in collaboration with Dr. Mark Ohman’s lab. It dives to a depth of 400 meters, using a zooplankton camera to capture photos that are used to infer the abundance of different species and a custom sonar to record zooplankton acoustic backscattering. Nets towed from R/V Sally Ride collected samples that are now part of the Pelagic Invertebrate Collection at SIO. As Dr. Ohman explains, “We took physical samples of zooplankton with an electronic opening-closing net (MOCNESS), to compare with the types of zooplankton imaged by the Zooglider camera. The MOCNESS samples have been accessioned into the Pelagic Invertebrate Collection and we are beginning to analyze them using a digital zooplankton scanner called a Zooscan.”  This scanner takes high resolution photos of the animals collected on the cruise, and a software program then classifies each into taxonomic groups for quantification.

Technician Emma lines the specimens up on the scanner (left), and then ensures image quality (right).

A technician named Emma Tovar oversees the process from start to finish. First up, the sample jar brought over from the collection is sorted into size fractions. Using small nets, specimens are separated into different jars – larger than 5 millimeters (1 mm = 1 thousandth of a meter) are classified as extra large, 1-5 mm are large, and less than 1 mm are small (see photos below). Emma then takes subsamples and arranges the specimens on the scanner. It looks similar to a normal flatbed scanner, but has a shallow pool of water on the glass. Emma is an orderly person so lines up all the animals in neat rows. This also helps the software separate and properly identify each. They are posed in a somewhat natural state, so that they will most closely resemble the photos taken of live animals by the Zooglider camera. After the scan is taken, Emma checks the images for quality, and then double-checks how the software has sorted them. It’s been developed over many years and is populated with images, from a few hundred to 20,000 examples of each type of animal. Emma has learned to identify all the usual suspects down to their taxonomic group. “I validate the images manually, sometimes it will be wildly off.” she says. The different-sized samples are then combined back together and returned to the collection.

This is a look into the what happens with samples from one group onboard one research cruise aboard R/V Sally Ride. Just imagine how many people are at work in labs all around the globe based on expeditions on the Scripps research fleet!