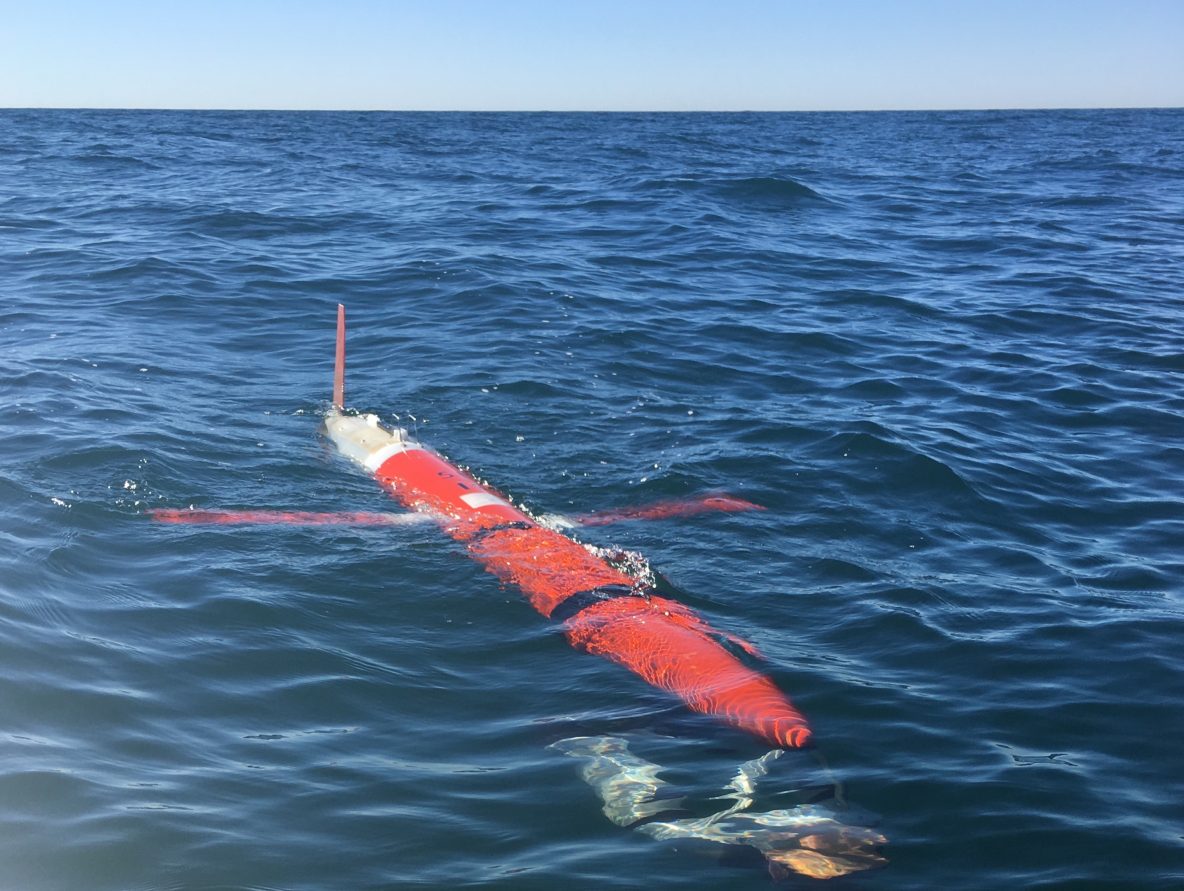 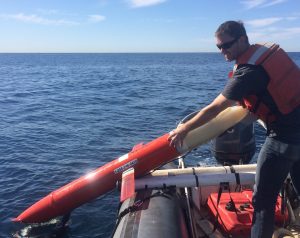 The zooglider is deployed and recovered using a small boat launched
from the Scripps pier. It’s 6 feet long with a 4 foot wing span.
Zooglider photos thanks to grad student Ben Whitmore.

Leg 3 of this R/V Sally Ride cruise is underway after switching out the science party in Oceanside. Samples are being collected by a few different groups, including Scripps professor Mark Ohman and undergraduate and graduate students from his lab. We are operating in the vicinity of a zooglider that was launched recently from a small boat. The glider is an unmanned vehicle that carries oceanographic sensors onboard and can sink to a depth of 400 meters on command. When it surfaces, it sends location information to the lab via satellite. It can stay out to sea for a number of weeks and is then recovered and the data downloaded from its sensors.

Scientists are collecting biological samples using the MOCNESS (multiple opening/closing net environmental sampling system), which is deployed from the back deck of R/V Sally Ride. They have done tows to 400m around noon and midnight each day, to account for the fact that critters move shallower in the water column after dark. The samples will be compared to pictures taken from a camera system on the zooglider, in order to determine whether krill and other animals may be avoiding the glider. The camera takes a picture every 0.5 seconds, capturing images such as those below. The abundance of various species can then be inferred based on how many were spotted by the camera. But it may be that those calculations aren’t indicative of the actual population, if the animals move away from the zooglider as it approaches. The net tows, however, are harder for them to avoid.

Images from the camera on a zooglider. On the left is a jelly, and on the right is a copepod, the main subject of study in Dr. Mark Ohman’s lab.

The MOCNESS tows take a few hours each. You can read more about how the net system works in a previous post. Sensors are mounted to the net frame, including a CTD (conductivity, temperature, depth), oxygen, fluorometer, and transmissometer. Live readings from these sensors are monitored by scientists in the lab during the cast, who give directions via radio to a crew member running the winch. When the package is brought back onboard, the ten nets are washed down with seawater. This rinses all of the critters caught along the length of the net into the cod end, which is then removed and brought into the lab. More rinsing and filtering is done, and then each sample is preserved for further study. Check out this 360 degree view of a MOCNESS recovery on the ship’s fantail.

The nets provide data about animals found in each depth range; each collects a sample covering 20-100 vertical meters at a time. With the camera, that resolution will be narrowed down to 5 centimeters, giving much more useful information about whether specimens are interacting with each other. This is the first study to take place when the zooglider and net tows are operating at the same time and in the same area as each other. Testing that the camera system can be reliably used to make inferences about zooplankton populations is part of making it a valuable tool.

On deck, each of the ten nets are rinsed (left), flushing the sample into the cod end.
In the wet lab, students filter and preserve the samples for study back on land (right).