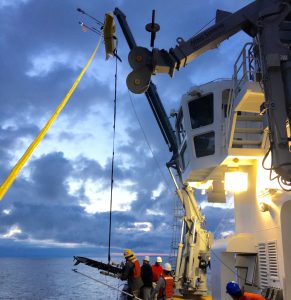 Sunset recovery of a wave glider. The float portion is up near
the top of the crane arm, while the sub portion is at the rail.
Photo by Dr. Sophia Merrifield.

As you may recall, Dr. Eric Terrill’s group was onboard in December to test drones and a remote-controlled kayak for scientific purposes. They’re back aboard R/V Sally Ride, this time with a different set of autonomous vehicles. They have multiple instruments for measuring the air-sea interaction that occurs at the surface of the ocean and upper water column from the surface to 100 meters depth.

Wave gliders have been deployed from the ship’s A-frame. For recoveries, the small crane, usually on the forward 01 deck of the ship to load food and other stores, has been moved to the back deck’s starboard rail. There’s two parts to these vehicles, one that floats at the surface and another submerged, connected by either a 4 or 8 meter tether. The sub has fins to harness wave motion into forward motion, moving the vehicle along at 1-3 knots depending on conditions – see the video below.  Sensors record data on the surface and subsurface portions of the platform. The floating platform includes wind, weather, and wave sensors, an ADCP for studying currents, and communications equipment to report its location back to the ship. Solar panels connected to battery packs means the wave glider can operate autonomously for weeks to months at a time. The two wave gliders are deployed from the Sally Ride and brought back onboard every 5-7 days to change sensors and download data. 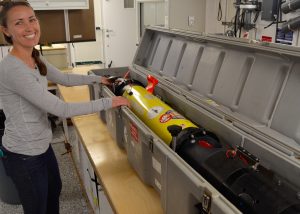 The Terrill group also deployed three REMUS AUVs (Remote Environmental Monitoring UnitS Autonomous Underwater Vehicle), for studying subsurface features in the upper ocean. The REMUS is a propelled vehicle, allowing it to operate at speeds up to 5 knots, and down to 100 m depth.  Sensors integrated into the vehicles measure temperature, salinity, depth, chlorophyll, turbulence, currents, and acoustic backscatter.

A moored wave buoy was deployed within the study area to measure waves in one location. In addition, five drifting wave buoys have also been deployed that send real-time information about wave height via satellite. 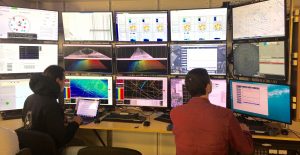 Scientists and engineers from the Terrill lab track the AUVs and monitor
the WaMos radar from the main lab control center.

The Terrill group maintains a radar system mounted on the ship’s mast, called WaMoS (WAve Monitoring System), that collects information on wave height and surface currents. The data from this will be combined with that from the autonomous instruments. R/V Sally Ride is operating in the same area as the research vessel Sproul and research platform FLIP. Scientists onboard all three are collaborating to understand surface waves and currents using different approaches and technologies, which requires making measurements in rough seas. This marks the first time Sally Ride has teamed up with other members of the Scripps research fleet, and it definitely won’t be the last.

on the @RVSallyRide studying upper ocean processes in collaboration with FLIP pic.twitter.com/4Cz2NDAZut