“It’s so awesome – the research, the science…you feel like you’re doing something good with your life. Just to know I’m part of it – loading the gear on, making sure everyone’s safe when they’re operating. It gives you that satisfaction of bettering the world. I wouldn’t get that from a 9-5 job. I’m incredibly grateful to be here.”

AB (able-bodied seaman) Aaron Putnam first came to work on R/V Sally Ride a year before the ship got underway to her home port of San Diego. In the Anacortes shipyard, the Scripps crew took the husk of the ship, which had been christened (floated) in August 2014, and made it into the functional working and living environment that it is. Being part of the crew when the ship was commissioned makes him a plank owner, an honor in the maritime profession. “It’s really rare to be a plank owner of a ship. It’s fantastic. Not too many people can say that they took out the newest research ship for the first time.” 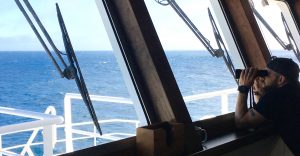 Aaron is a bridge watch-stander, which involves helping the mate with navigation and keeping a lookout.

Onboard, bosun Dave Grimes assigns tasks to the deck crew (ABs and OS) based on their strengths and interests. When the ship is underway, Aaron works two 4-hour watches, the 8-12s (0800-noon and 2000-midnight). There’s one AB per shift. As part of the day watch, they are responsible for deck preservation and maintenance, which includes removing rust, wash downs, and making sure science and ship equipment is secure. Along with the OS (ordinary seaman – Elysia in this case), the ABs also keep the interior of the ship clean. This is key, as for the last few months, a cold has been traveling around the ship, from science party to crew and back. It finally seems to have ended, undoubtedly thanks to the deck crew’s vigilance. Aaron also stands watch on the bridge with the Third Mate, assisting with navigation and driving, as well as lookout duties. The AB also raises and lowers day shapes and flags, which are used to convey information about the ship’s status to nearby vessels. During the night shift, he make rounds of the ship in order to keep an eye on safety and security. 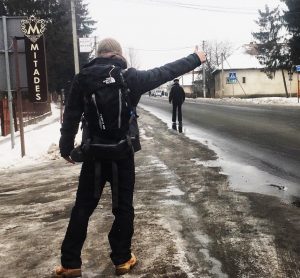 Aaron, in Ukraine, has hitchhiked all over the world.

In his down time Aaron is learning three new languages – Russian, Ukrainian, and Spanish. He’s also writing a book, a thriller novel he’s been working on for a year. And he’s always planning travel – next up is Thailand, and his goal is 30 countries in 2017. When I tell him that sounds like some seriously productive “down time,” he assures me that he has his lazy days too – playing video games or doing nothing but sleeping. “My goals are to study, to learn languages, to save money, and grow the hell out of this beard. You have to have one goal that doesn’t take any effort.” This last directive sounds like something we could all stand to learn.

A Navy man, Aaron enlisted right out of high school and spent seven years fighting piracy in Somalia. He left the service with 2,200 sea days. After a few months off, he was ready to be at sea again, so got his merchant mariner credentials. As part of this new civilian life, he began getting rid of possessions, including his car. Now, he says, “I can get off the ship with my backpack and my laptop, and I’m free, I can do whatever I want. I feel like an adventurer. That’s what brings me back.” He’s taken classes using the GI Bill, and plans to get qualified as a Third Mate, and eventually work his way up through the ranks.

Aaron admits to being both interested and intimidated by the science happening onboard. “I love being engaged in it. I’m always interested, knowing about the CTDs and equipment we’re putting in the water – it’s thrilling. That buoy, out on deck, is one of the coolest things I’ve ever seen in my life.” For someone who’s been all over the world, this is strong praise and, for what it’s worth, I agree with the sentiment. (Check out the post on the surface buoy recovery and deployment done on this trip.) 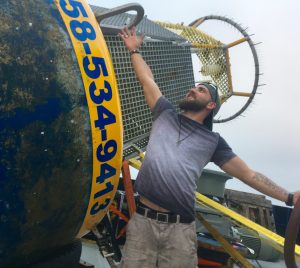 Aaron checks out the surface buoy on the back deck.
His beard is coming in nicely.

After bringing R/V Sally Ride home, Aaron took a few months off and went home himself, which for him is with his girlfriend in Ukraine. He wasn’t sure initially if he’d be coming back to work at Scripps but says the tight-knit crew was key to him returning. “It’s really homey and feels like a big, happy family. I’ve never felt so welcomed back in my entire life, anywhere.” And though he’s got a plan B of going back to school, I get the feeling that the Scripps research fleet is where Aaron will be found for years to come. He may not have grown up near the ocean, but as a kid he read Robinson Crusoe and had treasure maps on his wall, so it seems this adventurous lifestyle fits his personality well.