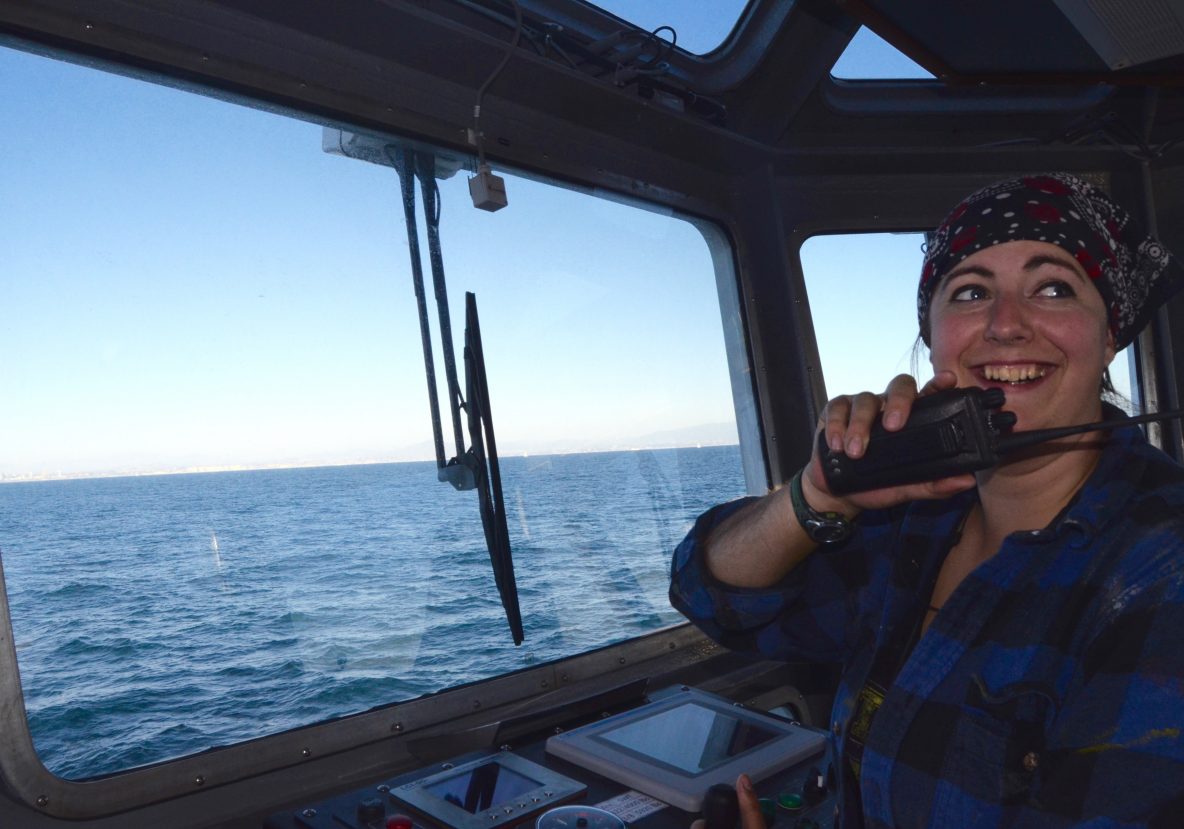 “I’m going to work on deck, I’m going to move forward. I am one day going to be captain of a vessel. It might be twenty years down the road, but no one’s going to stop me from doing this.”

Elysia is the ordinary seaman (O/S) onboard R/V Sally Ride, which is perhaps an unexpected job for someone who grew up in the land-locked state of Montana and went to art school. She has been working for Scripps for a few months after spending years as a processor on the pollock fishing vessel (F/V) Starbound in the Bering Sea. When she first got into the male-dominated industry, her co-workers placed bets on how long she would last, none of them believed she’d be there at the end of one season. Many seasons later, she was still working hard, and hoping to advance herself. “I knew from the first moment that I set foot on the Starbound that I wanted to be on deck,” she says. 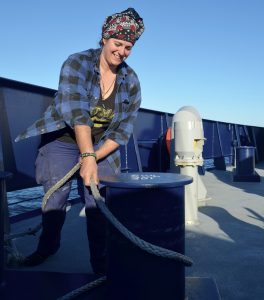 Elysia helps with the lines as the ship leaves and ties up at the pier.

Her goal of working as a deckhand required her to put in extra hours on top of the usual 16-hour processing shift in order to prove she could work on deck and in the wheelhouse. On her own time, she took classes towards an A/B (able-bodied seaman) certification in order to establish upward momentum. When it became clear that, as a woman, she wouldn’t be given the chance despite being qualified, she decided to apply to work at Scripps. Three months later, she was onboard R/V Sally Ride. And the culture, she says, is very different.

“Here at Scripps, you’re in control of what you learn – if I want to know it, someone will teach me.”

As O/S, she works the day shift cleaning the main deck and doing other ship maintenance projects as assigned by the bosun. This week, that has included rust removal on the working decks, and grinding, priming, and repainting the hook and headache ball on the ship’s crane. She jokes that her main job is cleaning up coffee spills, and I believe it. At least once a week I myself clean up a coffee spill that I come across (I don’t actually drink coffee), usually near doors, where people undoubtedly slosh when opening or closing them. See a hazard, fix or report the hazard – it’s part of being a good citizen, which is essential to life and work in close quarters. 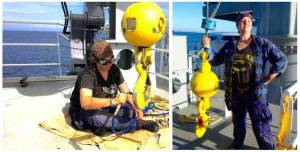 Elysia prides herself on a job well done, in this case refurbishing the ship’s crane hook.

Not one to coast, Elysia spends four hours of her down time each day on the bridge, gaining hours towards her A/B and watch certifications. The mates have all been teaching her various bridge-related skills, including navigation. It will take about a year of these volunteer hours for her to earn a spot as an A/B. She is also being trained on the use of the winches that scientists need to deploy and recover their instruments. Some research cruises, like the one we’re currently on, have overnight CTD casts, which require over 12 hours of continuous winch time. Crew members put in extra hours to accommodate those operations before and after working their usual shift. So any extra person able to get into the rotation is helpful, and Elysia is more than willing. “I just love it more than anything else. Truthfully, this is where I’m the happiest. No matter what, I still want to go to work.”

On her way between tasks, Elysia stopped by the lab to check out the live feed
from the ROV on the seafloor and talk to scientists.

When she’s not working in her free time, she’s often found playing games in the mess or lounge. She recently purchased board games for the ship’s supply and has her eyes on a Settlers of Catan set next. Spending down time with other members of the crew is not something that Elysia experienced in her previous life onboard a fishing vessel. She likes the camaraderie here at SIO, and the feeling that she’s helping to save the planet. “We’re making a difference. There are people doing new, amazing things. It gives you hope. Although I’m not a genius, I’m not an inventor, I’m contributing to that. And that’s just invigorating. I’m showing my kids it can be better. You can contribute, no matter what you do.”