The last few days, the San Diego coastline has put on a gorgeous light show. Tiny creatures called dinoflagellates have shown up in droves. During the day, the ocean turns the color of red wine as they congregate near the surface. But at night, they bioluminesce, flashing bright turquoise whenever they’re disturbed. Every wave crashes with color, as does every footstep or swipe of your fingers if you wade in or just play in the wet sand. San Diego residents have gathered to see the phenomenon from La Jolla to Carlsbad, and it’s a truly magical experience. It’s not an easy thing to capture on camera – but that doesn’t stop us from trying. Go out and see it in person if you can, otherwise enjoy these photos. 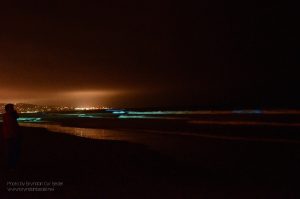 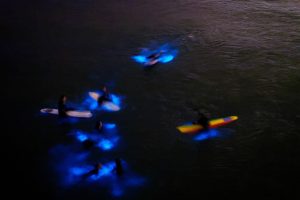 Surfers and swimmers near the Scripps Pier. Their every movement causes the dinoflagellates to bioluminesce. Photo by Billy Lambert, taken May 8, 2018.

I met up with one of R/V Sally Ride‘s computer technicians, Daniel (who you may remember from a previous post), around 10pm on May 8, 2018 at Torrey Pines State Beach, where he relayed to me a story about a recent experience he had aboard the ship.

“The night before we pulled into Manzanillo, I was going around checking the labs and doing final prep for the systems to be shut off after a successful cruise. It was past midnight. A frenzied scientist found me and frantically told me he had to show me something. He lead me outside to the bow of the vessel. After my eyes acclimated, I yelled out. There was sparkling blue lights popping in and out of existence all around the vessel. The bow created intense blue lights as the generated wake agitated so much bioluminescence. 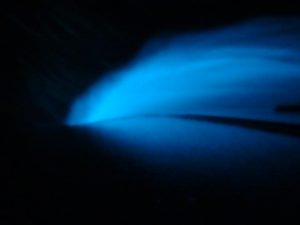 Bow wave, the water displaced by the front of the ship, glows with bioluminescent life.
Photo by Daniel Yang.

“Then came the dolphins. They were riding the bow of Sally Ride. At one point there were more than a dozen dolphins with their characteristic rapid sonar chirping that sounds like laughing. You can see them jetting in from the sides as they raced into the bow of the ship. You can’t even make out their tails because they generated a long vortex behind them, and all that is illuminated by the bioluminescent organisms; dolphin body + vortex. So they looked like dolphin ghosts with long tails, and the front of their heads were generating all sorts of large blue sparkling effects that looked like either the dizzy star effects from cartoons, or fairies hitching a ride in front of the dolphins. Two of them would weave in figure-8 formation in front of the ship; and occasionally, we’d see frightened flying fish just fly out in all directions. Those looked like fireworks exploding in front of the ship. 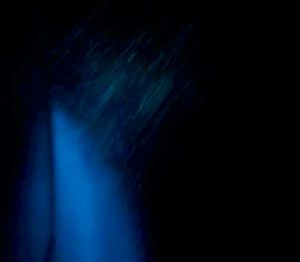 In this shot, you can almost make out the dolphins
swimming just ahead of the ship. Photo by Daniel Yang.

“Only about four people saw this. The night owl of a scientist, the second mate, the AB on watch, and me. Of course we wanted everyone to experience what we saw, but everyone else was sleeping. The ocean was as calm as it could be.. almost glass-like where you could see all the stars ever, and the reflection of the stars across the horizon. It was a moonless light. Fairy ghost dolphins with blue fireworks from flying fish, surrounded by a sparkling blue ocean all around us in a glassy sea where you could see the reflection of the stars. It was perfect.”

Magical experiences where we sit in awe of nature solidify our love of the ocean. All of the technicians and crew members who work aboard R/V Sally Ride have stories like this to share after years working and living at sea. With the local bioluminescent event happening, there’s no excuse for

everyone in San Diego not to have one too. Get out there!

More details about the phenomenon are available in this article from Scripps Institution of Oceanography.