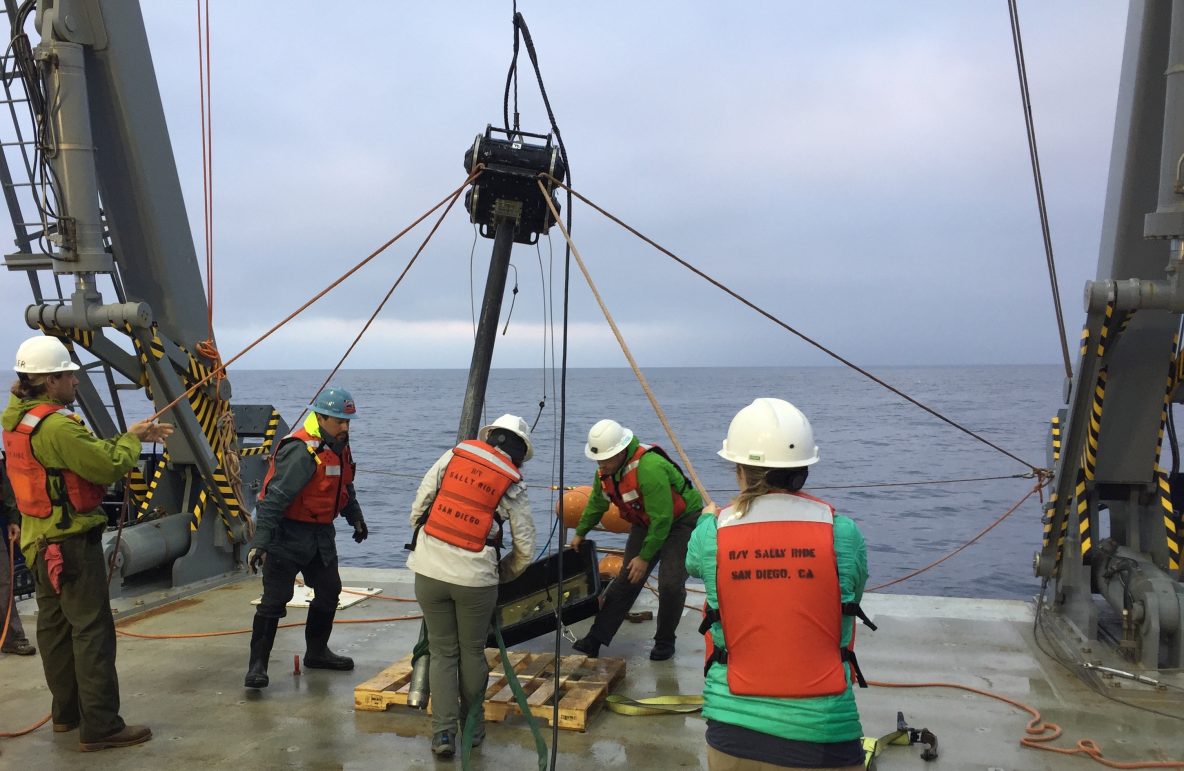 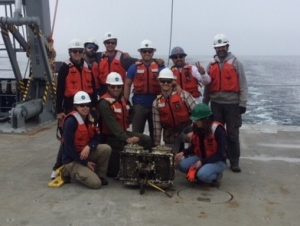 Many of the recent cruises on R/V Sally Ride have been student-led, thanks to the UC Ship Funds program. Scripps Institution of Oceanography (SIO) graduate student James Holmes was awarded ship time in December. As Chief Scientist, he led a partnership of SIO and San Diego State University students, along with scientists from Utah State and the Museum of Natural History in LA.

Upon arrival at the project site near the northern Channel Islands, a Chirp survey was conducted. This involves a towed acoustic source that pings off the seafloor and returns data about the density of ocean bottom sediments to scientists onboard. There is a similar system mounted to the hull of the ship, you can read more about its functionality in this blog post. After the survey, the team deployed a vibracoring assembly to collect sediment samples. These will be matched to the acoustic data and then the age will be determined based on radioisotope analysis. Archeologists looking for evidence of early humans are involved in the project, as coastal settlements during the last ice age are underwater today.

A vibracore consists of a 4-inch diameter carbon steel pipe 10 feet long, with a base plate attached on one end and a motor on the other. It is deployed off the back deck so that the plate lands on the seafloor first (see header photo, from James Holmes). The motor then vibrates at around 3,000 vibrations per minute, sinking the tube through a hole in the base plate and into the sediment. 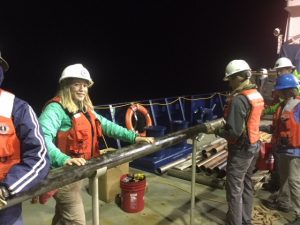 After collecting cores at a dozen specific sites around the project area, James and the team returned to coordinates where a vibracoring assembly was lost during operations aboard R/V Sproul back in June 2017. It wasn’t a main cruise objective, but attempting to recover the assembly was part of the plan if there was time. As Chief Scientist James explains, “We imaged the assembly using sidescan sonar and multi-beam swath bathymetry and then recovered the entire assembly from 40 meters depth by dragging a very large grappling hook at the end of a few kilometers of cable on the ocean floor.”

He is quick to admit that the chances of successfully finding and recovering the lost equipment had “barely a 5% chance of working.” After all, the motor presented a 1 meter by 1 meter target for the transducer to pinpoint. Co-Chief Scientist Dr. Jillian Maloney from SDSU confirms that the recovered equipment will be able to be used again. “The motor was still vacuum sealed and all the internal workings were just fine. It looked brand new, which is kind of remarkable…” she says.

All in all, it was a very successful trip that put R/V Sally Ride‘s experienced crew and technicians to the test. “The skill and cooperation of Captain Lawrence, and SIO ResTech Jeremiah gave a successful and satisfying conclusion to (the) operation,” reports the happy Chief Scientist.

Left: Closeup image of data used to discover vibracorer assembly. White dot is the vibracorer motor and float assemblies. Black dot to the right are acoustic shadows cast by the vibracorer on a backdrop of illuminated seafloor. Photo by James Holmes.
Right: Restech Jeremiah poses with the recovered vibracorer assembly, previously thought lost at the bottom of the ocean. The pipe was bent, but the motor is in good condition and will be used again. Photo thanks to restech Jeremiah Brower.