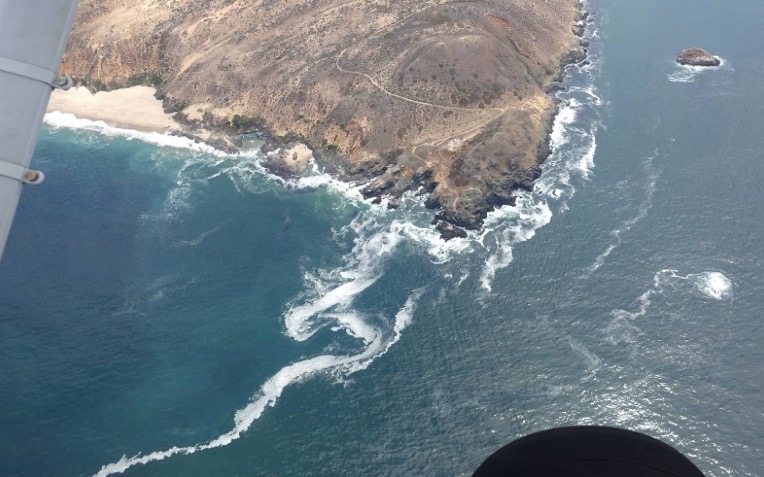 R/V Sally Ride is finishing up mooring operations for Chief Scientist Dr. Bill Hodgkiss and will soon be headed back to port. It’s another quick turnaround, the ship heads out next week to an area just off the coast of Southern California between Point Conception and Avila Beach. An ONR (Office of Naval Research) funded project, scientists will be aboard from Scripps, Oregon State University (OSU), University of Washington (UW), and the Naval Postgraduate School (NPS) in Monterey. And it won’t just be Sally Ride at work. OSU’s research vessels Oceanus and Kapili will also be in the area, as well as SIO’s Sproul. Small vessels and even aircraft will be part of the joint effort as well.

This intensive observing effort is part of a multi-year effort to to better understand the “inner shelf”, the part of the coastal ocean offshore of the surf zone but onshore of the shelf break (where the ocean depth plummets to hundreds and thousands of feet).  This area is governed by unique but complex physical processes, including wind-driven circulation, upwelling, breaking waves, wakes and instabilities, and internal waves (that ride on density interfaces below the surface). The map on the left shows the study area, with various symbols representing sites for wave observations, sonar surveys, drifter and mooring deployments, wave gliders, quadpods, bottom landers, ship’s radar, and even drone flights with an infrared camera. More on how all these technologies work together to tell a story coming in future posts.

The scientists will collect every feasible bit of data they can. Combination of all of these observations will help them both understand the basic processes, and use that understanding to improve forecast models of the coastal ocean.

A variety of aerial images of the work site add data on properties of wind, waves,
and currents. Photo credit to Gordon Farquharson (UW).

For her part, Sally Ride will deploy twenty-two moorings during the course of the cruise. These are done during daylight hours to make the operations safer and easier. Overnight and then for an intensive period after the mooring deployments, the ship will conduct ADCP (Acoustic Doppler Current Profiling), density, and turbulence surveys to study these complex phenomena. You may remember another internal wave project performed aboard R/V Sally Ride, check out this post to learn more.

Stay tuned! Co-Chief Scientists Dr. John Colosi (NPS) and Dr. Jennifer MacKinnon (SIO) will be blogging on this page, as well as Sproul’s Chief Scientist André Palóczy (SIO). There are also blog posts here. And for all the details you could possibly want, check out the publicly available experiment plan.