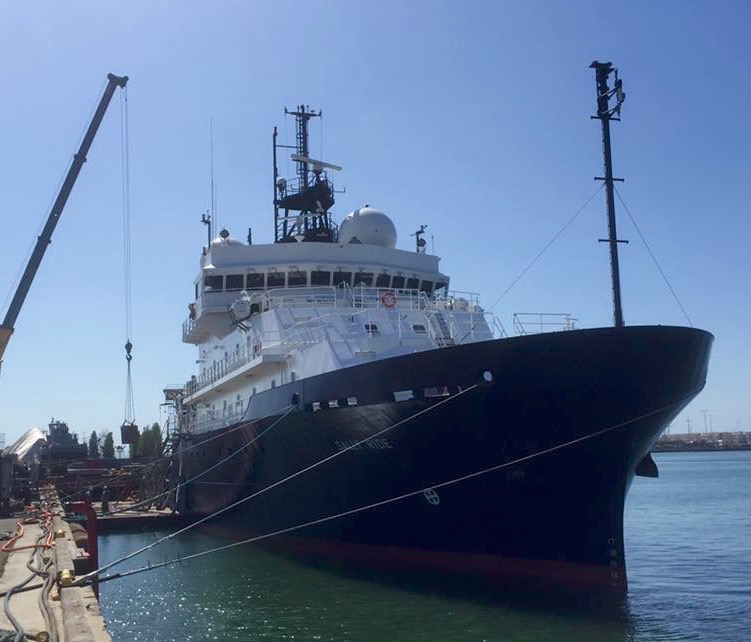 The final steps of the new paint job were done with the
entire ship under cover. Photo by 2nd Mate Randy Christian.

R/V Sally Ride is back in the water after two and half months in a shipyard dry dock in Alameda, California. As you may remember from previous posts (here and here), there was a lot of work done to the ship during that time. Everything on the to-do list has been completed, including the addition of a CTD hangar, a reinforced forward 01 deck, and a new paint job. The crew is excited to have the ship back, and took her out in San Francisco Bay for a series of sea trials to make sure all the systems are working properly.

Scientists are now onboard and loading their gear for a research cruise. It will be a mooring trip out to Ocean Observatories Initiative (OOI) array at Station Papa, which is in the Gulf of Alaska, about halfway between Seattle and the Aleutian Islands. As with other mooring trips aboard R/V Sally Ride, this one will include the deployment and recovery of instrumentation designed to spends months to years in the water column.

The transition time between shipyard work and this research cruise is brief, so everyone has been working flat out to make it happen. It’s gone from the seeming chaos of just a week or two ago during the final stages of work in the shipyard to the orderly setup of the working deck, where every piece of equipment is secured in place and ready to head out to sea.

What a difference a week makes! The back working deck of R/V Sally Ride towards the end of shipyard work (left, photo by restech Keith Shadle). The walkway is actually the top of the ship’s A-frame, which is in maintenance mode, lowered all the way onto the deck. On the right, taken this week, all that clutter is gone, the A-frame is in its usual configuration, and mooring gear such as anchors and floats full of instrumentation have been loaded and secured in place. (Photo by 2nd Mate Randy Christian, note the lovely San Francisco skyline in the background.)

At the end of this cruise, R/V Sally Ride will return to her home port of San Diego, where there’s a busy schedule of research cruises for the rest of 2017. We hope you’ll follow along!

R/V Sally Ride is back in the water after two and a half months in a shipyard dry dock. As 2nd Mate Randy put it "…as…