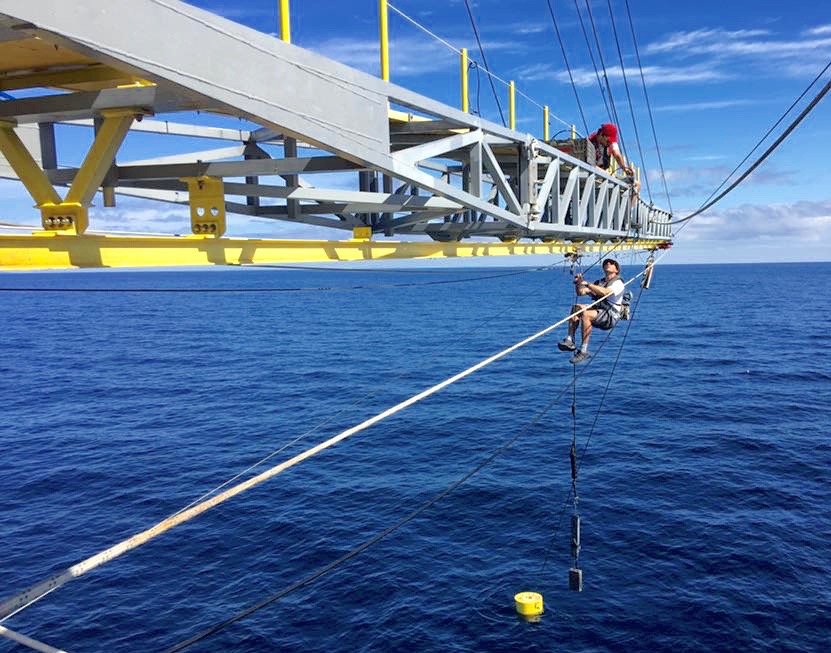 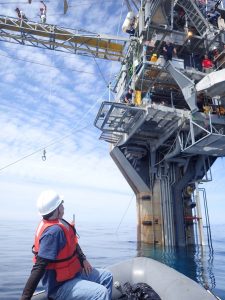 The small boat from R/V Sproul pays a visit.
Photo by Jeremiah Brower.

**Guest blogger Randy Christian is a crew member on R/V Sally Ride, but this month is working on FLIP, Scripps’ FLoating Instrument Platform. FLIP is deployed on a project offshore of Southern California, accompanied by other members of the SIO fleet, R/V Sproul and R/V Sally Ride. You can learn more about Randy in this blog post introducing him as second mate, though he sometimes sails as third mate, and read his first report here.**

Monotony set in after the first week or so. Though morale is still generally good aboard the R/P Flip, by now signs of restlessness and homesickness are showing. It’s no secret we would all rather be with family and loved ones. We are all missing the creature comforts of home, privacy, long hot showers, clean laundry, and our own beds. This is sometimes exacerbated by the issue of food. Anyone who’s worked on ships for a while knows the importance of food to the morale of the crew. Run out of anything, and there is a noticeable dip. Fresh fruits and vegetables are hard to come by after the three-week mark. Thankfully, we’ve had a couple resupply missions from the Sally Ride, which has much more reefer space than Flip does. Hot sauce and the “good” coffee are running low, but we’re keeping it together. Things could be worse, and we are on the final countdown with just a week to go. 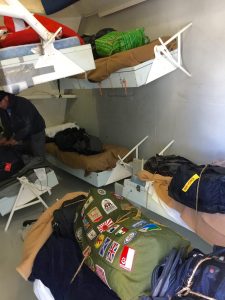 The so-called penthouse, with bunks for crew and
scientists. Photo taken by Randy Christian before
the flip, bunks swivel and are then locked into place.

Individual idiosyncrasies and habits, having been tossed together into this confined space with virtually no privacy, have aggregated together to become little rhythms and traditions, an odd Waterworld-meets-The Life Aquatic kind of culture. The squeak and clank of rigging is ubiquitous, as is the sound of water bottles being crunched in order to save space in garbage bags. Heavy metal plays on the Bose speaker in the galley as Matrik cobbles together our next meal. Coffee is slurped quietly out on deck while giving the gulls congregated around Flip the evil eye. The Wirewalker’s buoy has developed an amusing squeak that sounds like the bark of a shih-tzu. Pairs or small groups of people form around a piece of equipment or a computer monitor and discussions break out. The individuals then dissipate, and new groups and discussions form in other areas. Discussions range from the utterly pedestrian and mundane to the fascinating and profound. Everyone comes out on deck to watch dolphins and whales swim by. I get off watch at noon every day, and Johnny Rod is watching Flipper in the penthouse, something that has become correlated and identified with my afternoon supercomfyrelaxingtime. 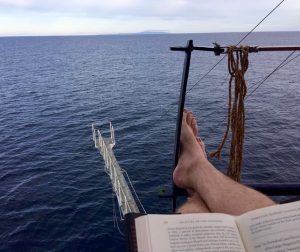 Down time relaxation is a necessity. Photo by Randy Christian.

Later, the residents of the penthouse gather there with our dinner plates to watch some much-needed comedy while we picnic on our bunks. Several of us gather on the exterior decks to watch the sunset, if there is one. At any given time of day, Tom is telling someone a story, and someone is lounging in a beanbag or a deck chair and reading. Headphones signal a desire to be left alone. Some evenings, San Thanh Nguyen shows off his gallery-quality photography, and sometimes asks for input on which of his photos he should enter into the County Fair. Depending on the time of day, you know who is likely to be in the lab, or the pilothouse, or the galley.

There have been minor gear issues, which caused Laurent’s near-constant smile to be temporarily subdued for a few days, but by all accounts the trip has been a success. The Wirewalker walks its wire and collects data that San spent the first few days writing code to be able to interpret into a series of graphs on his monitors. The “underwater weathervanes,” as I call them, are on an intricate system of rigging that periodically adjusts itself (startling whomever is standing near the winch), or gets adjusted by Laurent and Ralph “R.J.” Jiorle from out on the booms. Jerry Smith’s passive sonar array, mounted on the hull, does its thing and beams him data. The wave gliders circle Flip, or rather rectangle it, sending their current location and wave motion data to R.J.’s workstation. Terabytes of data have been and continue to be collected just here on Flip, to say nothing of the two other ships and the small plane that have also been involved in this big, expensive project. 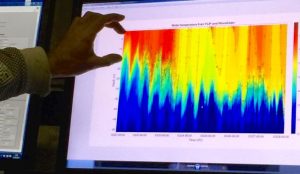 It will take the scientists months to comb through it for meaningful patterns and trends. Some of it may never even get used, there’s so much. Laurent (now referred to as “The Wiry Frenchman” by his cohorts who read my first blog post) will be writing several papers, as will other members of the scientific parties here on Flip, and those aboard the research vessels Robert Gordon Sproul and Sally Ride. I look forward to reading them from the comfort of my big red couch with one arm around the woman I love. It won’t be long now.