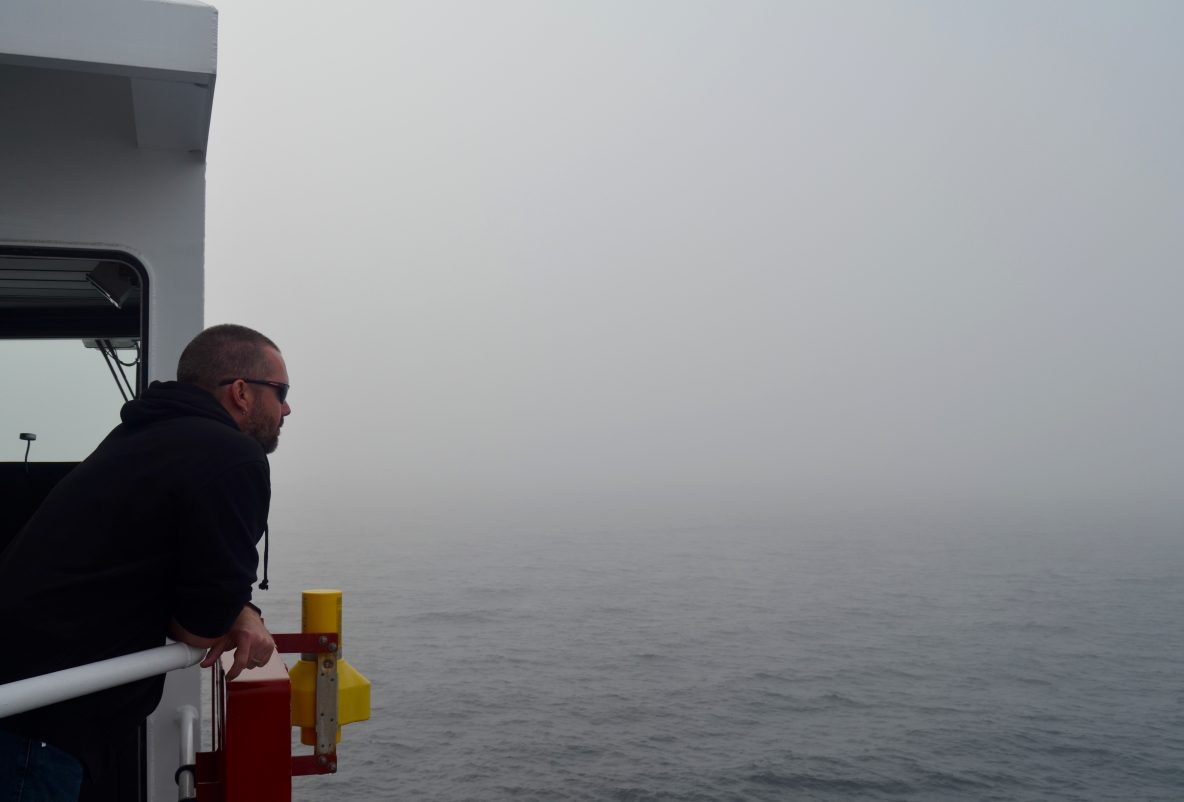 “This is the job I wanted…it’s just a great environment, great people, involved in interesting work that I feel is contributing to the bettering of the world. I feel like I’m part of something big here.” 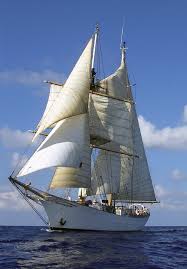 The SSV Corwith Cramer, one of SEA’s
schooners. Romantic indeed.

R/V Sally Ride’s Second Mate Randy Christian came to the maritime industry via a circuitous route. One day while taking classes at the Evergreen State College in Olympia, Washington, he saw a poster in the hallway for SEA (Science Education Association)’s semester at sea. The advertisement, which he described as “terribly romantic, with two big gleaming white schooners on a windy day,” called to him, and he decided to apply. He then found out that Evergreen offered an interdisciplinary semester-long program, teaching the history and literature of the maritime industry in the Pacific Northwest, along with navigation, sailing, and an introduction to oceanography. He enrolled, and during the two week sailing trip in Puget Sound at the end of the semester, he says, “I was sold. I was like, ‘Oh, I want to do this for a living.’” He also attended SEA’s semester at sea for college credit, and then worked as a deckhand on eco-tourism cruises and tall ships running field trips for kids.

Onboard R/V Sally Ride, Randy works on the bridge eight hours per day. His watch is 12-4’s, so noon to 4pm and midnight to 4am, which he admits is rough to get used to. He tries to sleep “at night” from 4-11am, and then get a few more hours in during his other down time, which means rousing himself from a nap at 11pm to go to work. When the ship is in port, the crew works a day shift (7am-3:30pm) on weekdays. For those who work split shifts while at sea, this means switching back and forth between those schedules. Imagine working 12-4’s for nine days, then the next day switching to the day shift for five days, and the day after that back to 12-4’s. 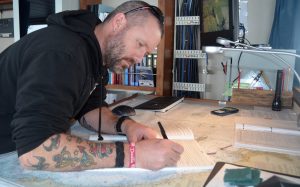 At the end of each shift, Randy ensures the log, charts,
and navigational computers are up to date.

This is a part of a crew member’s life that they just make work, because they have to, and because they know that showing up for work relieves someone else. After his day shift, Randy goes to the gym, though he says “every day is leg day,” on Sally Ride, due to all the stairs. He is a also binge-watcher, whose recent obsessions include Westworld and Black Sails, and is on the lookout for good sci-fi options (I recommended Battlestar Galactica).

As second mate, Randy is the navigational officer. He maintains the onboard chart catalog and navigational equipment, and plots the ship’s course based on waypoints (position in latitude and longitude) provided by the Chief Scientist. On this coring SVC, that includes locations for science operations as well as survey grids. The scientists collect sediment cores during daylight hours and running surveys at night. Randy’s day shift has primarily involved holding station using the ship’s dynamic positioning system, which uses thrusters to hold the ship in place to within 5 meters, factoring in currents and winds. Click here for a 360 degree view of the bridge, including the essential coffee-making equipment. 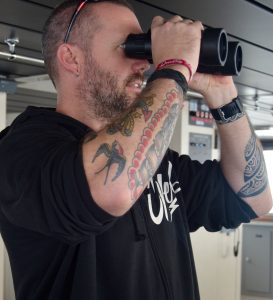 Randy has tattoos professing love for his family, as well as
from his nautical and travel adventures. The two swallows
represent his crossing of both the Pacific and Atlantic Oceans.

During the night shift, he runs transects – also called mowing the lawn – where the ship moves in a grid at reduced speed in order to map the seafloor using echo sounders mounted on the hull. Randy’s shift mantra is “Boring is good,” meaning that routine is preferred – a lack of alarms or special circumstances make for the best days.

Randy worked for Scripps between 2004-05 as a mate onboard R/V Sproul and R/P (research platform) FLIP. He then went to work for MSC (Military Sealift Command, a US Navy organization that provides transportation for the Department of Defense). Moving to larger ships, he had to work through the ranks all over again, and is now qualified as a second mate on the other ships in the Scripps fleet, R/V Sally Ride and Roger Revelle. It’s a pay cut to work in the academic fleet, but one Randy sees as offset by the community aspect at Scripps, and the contribution to science. He enjoys working with other crew members who choose to be on research vessels, and the revolving door of scientists that rely on them. For someone who started out planning to go to art school to become an animator, Randy seems a natural sailor, and R/V Sally Ride is lucky to have him.