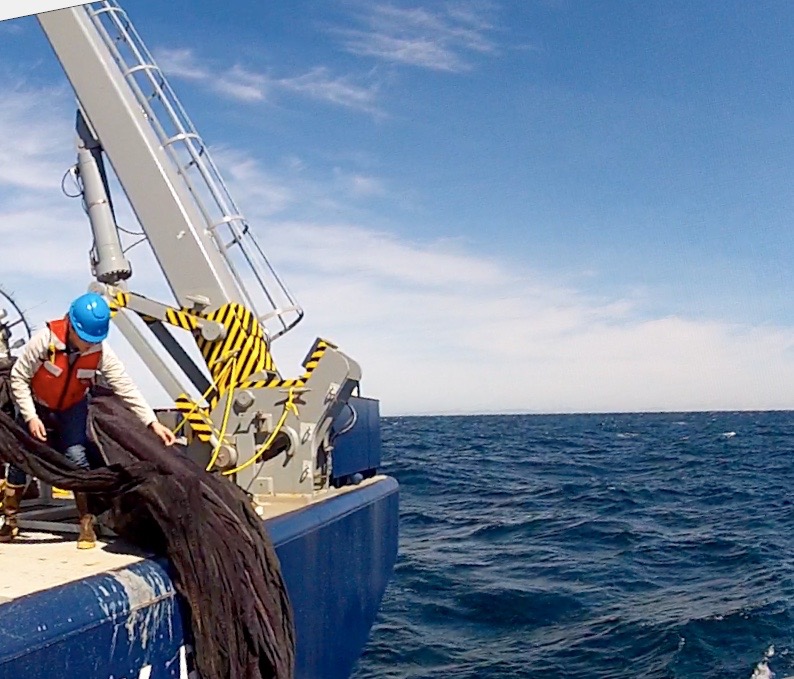 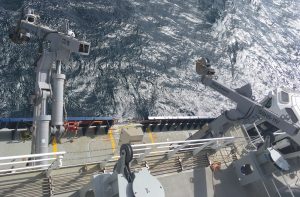 The starboard handling systems (T-rex arms) as seen from the bridge.
The forward (left) usually handles the CTD using cable while the aft
(right) is connected to a drum of wire.

The crew of R/V Sally Ride works hard to make the ship as capable as possible. The science plan for this cruise includes multiple deployments of a net called a MOCNESS. Ready for the ridiculous acronym? Multiple Opening/Closing Net and Environmental Sampling (or Sensing, depending on who you ask) System. Other types of net casts on previous cruises have all taken place using the aft starboard handling system (which I call T-Rex arms, see photo).

The MOCNESS has one large opening that splits into ten nets, each with its own cod end (the removable basket at the end that collects the sample). It is connected to cable (not wire like most nets) which facilitates a two-way signal between the net mechanisms and a computer in the main lab. The opening to only one of the ten nets is open at any given time, and a signal can be sent to close it at a specified depth, capturing a sample and opening the next net. 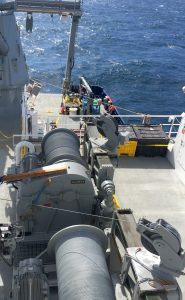 The block on the drum of cable (bottom
right) pivots to facilitate deploying the
MOCNESS via the A-frame (background).

On the first deployment, the cable usually connected to the forward starboard handling system, which is used for CTD deployments, was run through the aft system. With the net in the water, the setup was deemed risky, and the cast aborted. That’s why we call it a science verification cruise, we’re still learning about everything the ship can do.

Crew members and scientists worked together to formulate and test a new plan, which instead runs the cable through a block on the A-frame at the back of the ship. The drum of wire is designed to feed in a range of directions, which makes this operation possible. The MOCNESS frame and nets were moved to the back deck after multiple trials confirmed that the new path was safe. Thankfully, R/V Sally Ride was designed to accommodate a huge range of science operations, and these science verification cruises have really put the ship through its paces. The first deployment was successful and both day-time and night-time net tows have taken place as planned. The species diversity and density is different depending on the time of day, so multiple casts are needed. Check out this blog post to see pictures of samples from the MOCNESS tows! 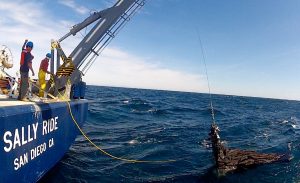