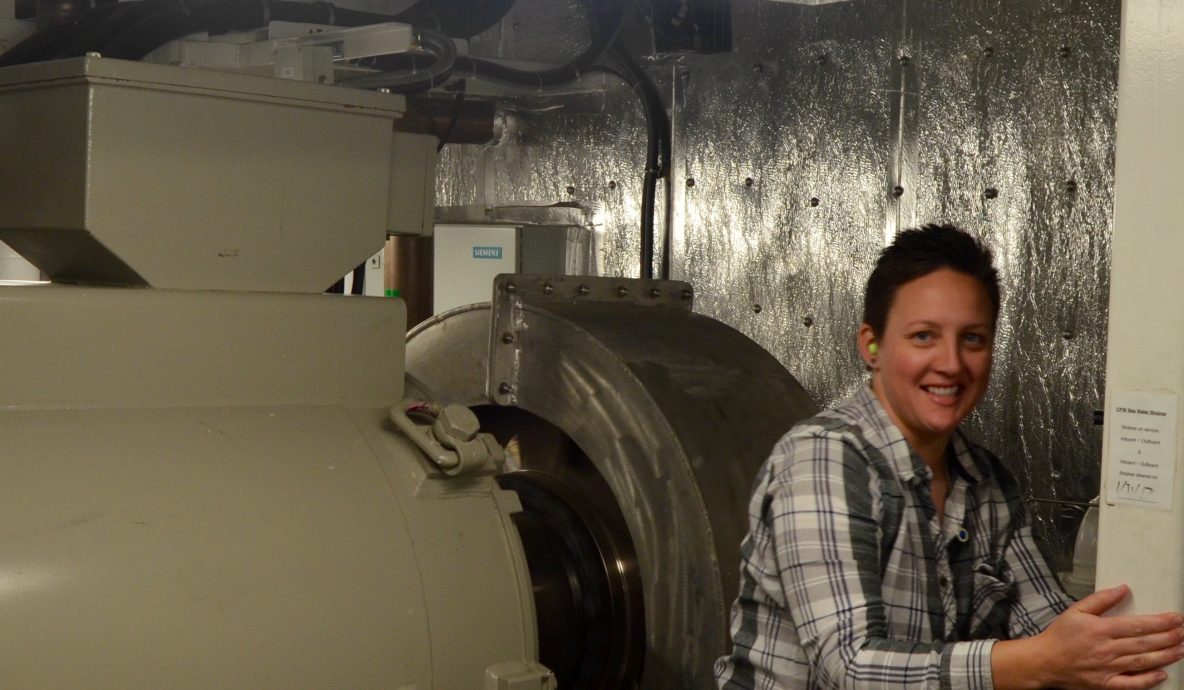 “Not many people can say they love their job, that they like to work. I can.”

Second engineer Sue Swader has been on the water since infancy, and loves it. Her grandparents have a sailboat and she spent summers sailing with her family to the Channel Islands, including Catalina and Santa Cruz. When she’s not working on the water, she’s playing on it – surfing (when the water’s warm enough), water-skiing, wake-boarding, and “anything to do with the water.” Sue’s home base is in Washington State, where she spends time with family during vacations. 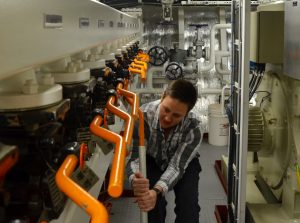 There are multiple levers and pumps involved in
the transfer of fuel that Sue performs every morning.

Sue studied at Cal Maritime, part of the California State University system. At first, she considered a degree in facilities (shore-side) engineering, but opted instead for marine (sea-going) engineering with a minor in marine science. She played water polo, though the women’s team had a hard time finding players to fill out their ranks. The student population was 86% male, something Sue says never bothered her. The marine engineering industry itself is likely even more dominantly male, though Scripps aims to buck that trend.

Onboard Sally Ride, the engineering department maintains essential equipment all over the ship, including the air supply, potable water, drains, sewage, fuel, propulsion, and electricity. When the ship is holding station, only one engine block is powered on, to generate the electricity needed to run the main systems besides propulsion. When the ship starts moving again, a second engine comes online. Check out this 360 degree shot of the engine room, showing the four engine blocks. 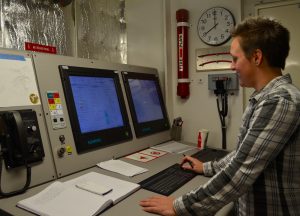 Sue monitors systems all over the ship from the nerve center.

The second engineer is referred to as the “fuel king,” and is in charge of all fuel operations, including transferring diesel from the storage to the day tanks each morning and keeping logs of fuel consumption. Sue is also in charge of the RO (reverse osmosis) system that turns seawater into potable water, which is piped into sinks, showers, and water fountains all over the ship. Consoles in the nerve center overlooking the main engine room show diagrams of all the engineering systems. From there, status reports, pressure gauge readouts, and alarms can be monitored, but the oiler also does rounds to visually inspect systems onboard. Sue and the oiler on her shift, Buck, have a good rapport which, she says, “makes watch a lot better, if you get along. If you can joke around and hang out, it makes it easier.” 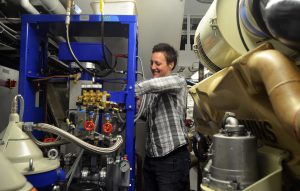 Sue seems at home amongst the pipes, levers, buttons, and other
“do not touch” items that are a fixture in the engine room.

Sue and Buck are on the prime shift, 8-12’s (8am-noon and 8pm-midnight). It’s the closest to a normal schedule in terms of when to wake up and go to sleep. Unlike second mate Randy, who’s on 12-4’s, switching to a day shift when in port isn’t a huge transition. She sleeps between her night shift and morning shift, sometimes getting a nap in during the afternoon down time. Sue likes to read FBI thrillers, pulling James Patterson and Catherine Coulter titles down from the shelf in the library to pass the time.

She’s been working for Scripps for three years, and has served as an engineer on both the R/V Revelle and now-retired Melville. Her longest trip was 35 days between ports, though she prefers to see land more often than that, saying “I like to come into port, check out the town.” Like many of the crew, Sue chooses to work on research vessels because she likes being part of scientific research around the world. Her marine science studies are ongoing, as conversations with scientists over meals are routine onboard. The community feeling among the crew, and getting to know new groups of scientists every few weeks, are perks of a job at Scripps. She’s excited about the longer and farther-flung trips R/V Sally Ride has planned for the second half of the year, and going forward.