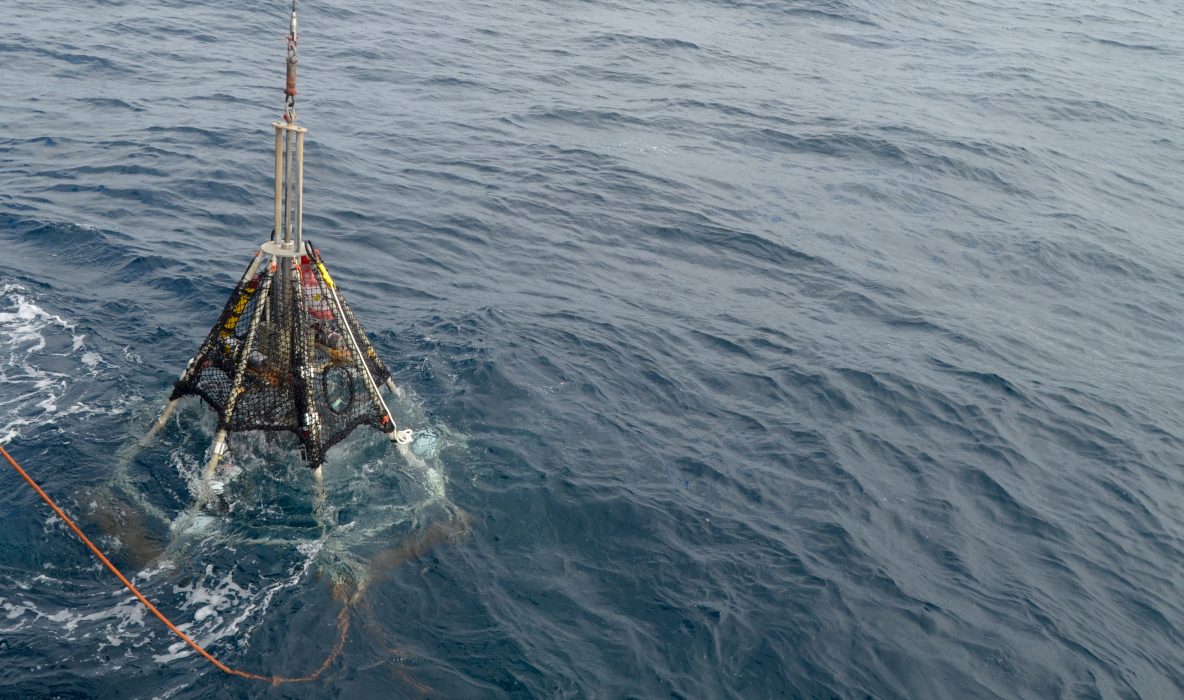 As part of this science verification cruise, groups from Scripps, WHOI, Oregon State, Sacramento State, URI, CSU Bakersfield, and the USGS are testing out various coring devices using R/V Sally Ride. This requires a very specific setup on the fantail, with two small cranes bolted down for fine-tune positioning of the heavy coring equipment. Also on deck are two container vans, one housing a mobile laboratory for analysis while the other is basically an oversized toolbox. 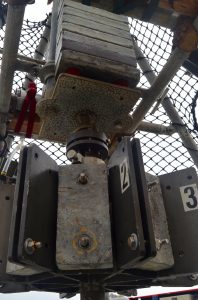 The main column of the multi-corer includes
weights (top), the tripping mechanism (disc at middle),
and a frame for the eight numbered sample tubes.

The cylinder that collects gravity and piston cores is staged along the aft portion of the starboard rail, with the ship’s crane used to move it to the fantail for launching. This requires moving the A-frame forward out of the way, an ability unique to newer research vessels. Once the sequence was established, a total of twelve piston and gravity cores were successfully deployed.

The multi-corer deployment is logistically more straightforward, but there are still many factors that can cause it to return empty-handed. The center column is connected to the trawl wire, which is run through a block connected to the A-frame. When the package lands on the seafloor, the wire goes slack, lowering the weights which in turn push the open core tubes into the sediment. When the wire is hauled back in, the line goes taut again, which triggers the caps on top of the tubes to shut, creating suction and securing the samples. For good measure, a cover snaps into place across the bottom as soon as the tubes are above the seafloor.

Amazing #Multicore sampling collage at #Kveithola Trough in the #Arctic on board #Polarstern during #BURSTER cruise. pic.twitter.com/ZvVXNmdO6O

There’s netting around the frame to keep the wire from getting wrapped around any instrumentation when it’s slack while on the seafloor. The wood at the bottom of the frame keeps the feet from settling into the sediment too far, which could make it harder to recover and risks the samples penetrating past the surface of the seafloor. 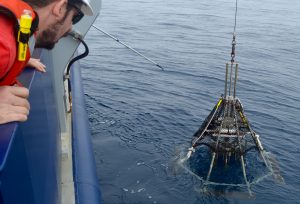 Portrait of a hopeful scientist. USGS researcher Jason waits
to see if the tubes captured samples.

The first deployment of the multi-corer from R/V Sally Ride did not bring back any samples. Neither did the second, or the third. In between each, adjustments were made. Springs on sample tubes, weights on the frame, speed of the wire going down, payout of wire once on the seafloor, time spent sitting on the seafloor before hauling back, which person was giving directions over the radio – there’s a lot of factors. And there’s also environmental conditions, such as how choppy the sea surface is, how much the ship heaves, or whether there’s sub-surface currents.

On the fourth try, two of the eight tubes had samples in them. More adjustments. And then, on the fifth recovery, success! All eight sample tubes had both sediment and water in them, which tells the scientists that these are indeed seafloor surface samples, along with the water just above. The sixth deployment was also a success, garnering eight more samples from a different site.

The sample tubes are carefully removed from the frame and split amongst various groups onboard. Some researchers will study the sediment, others the water. Groups from Sac State and the USGS remove most of the water, and preserve the sediment for analysis and archiving. The data will be matched up with piston and trigger core data taken at the same site to build a continuous record of seafloor sedimentation. Dr. Dennis Graham from the University of Rhode Island gets two of the samples, and will study the hydrographic properties. His tubes have a series of holes pre-drilled into them, plugged by electrical tape during the cast, which he then uses to syringe samples through. Nutrient, alkalinity, and other analyses will be run back in the lab.

Portrait of a happy scientist. Multi-corer samples are removed from the frame (left), extruded and preserved onboard (middle) by the Sac State and USGS groups, with filtered water samples taken for analysis at URI (right).

The purpose of the science verification cruises on Sally Ride is to ensure that the ship is ready for full science operations. This has been a successful trip, involving scientists at the top of their fields working together to put the ship through its paces, and get samples to take home as a bonus.

Who's got 2 thumbs and 8 multi-core samples? This @USGS scientist! After a few days of trials, we got good water-sediment interface samples pic.twitter.com/NVALtpoCPh