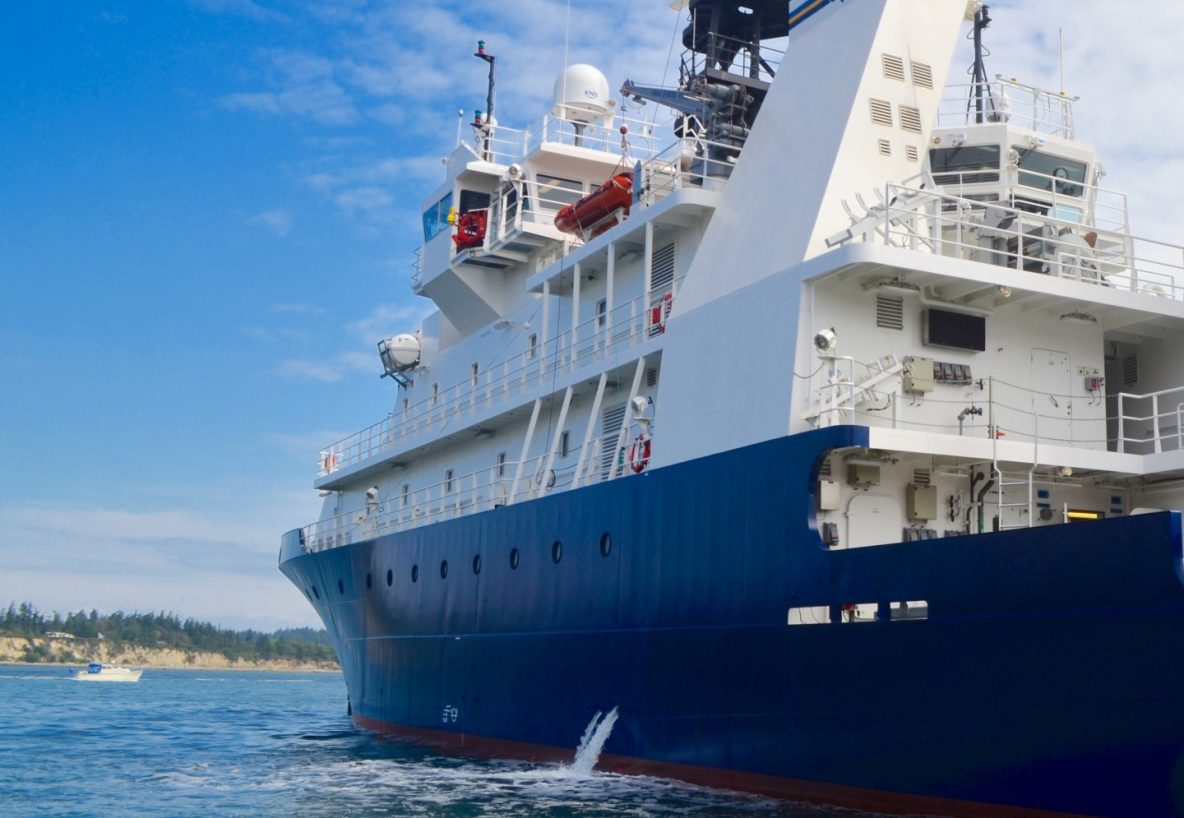 Aboard R/V Sally Ride, we’re always studying the ocean as part of the science – but that’s not the only water we have to be concerned with. Thankfully for those in the science party, the engineering crew takes care of all the rest (in addition to keeping the ship’s propulsion and electricity up and running). 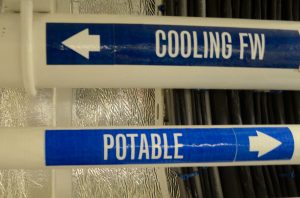 Labeled pipes run throughout all levels of the ship.

The ship is capable of making all the fresh water necessary to keep the people and systems aboard happy
and healthy. The reverse osmosis system is capable of making 5,600 gallons of potable water, which is plenty considering the assumed consumption is 40 gallons er person per day (1,800 gallons for a full compliment of 45 crew and science members). Some science parties require deionized water. Water from the engine room evaporators is pumped up into the lab and run through a purification system that includes ion-exchange and carbon filters. This ultra-pure water can then be used to make up the reagents needed for chemical experiments run onboard. 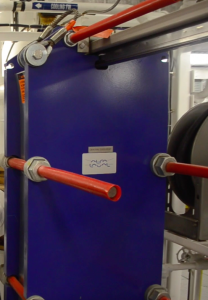 The plate heat exchanger, through a series of
pumps, uses seawater to cool fresh water.

Gray water from sink and shower drains is brought back to the engine room and filtered before being sent overboard. All ship drainage happens on the port side of the ship, so as not to interfere with any science sampling that may be happening on the starboard side. Black water (sewage) is also treated onboard, in a separate area of the engine room. If there are any restrictions on dumping, like when the ship is in port or near a marine protected area, the ship’s waste can be sent to holding tanks designed to store 96 hours worth.

Seawater (of which we have access to an unlimited supply) is strained on its way into the engine room. It is then pumped into heat exchangers in order to cool fresh water, which is then sent throughout the ship to cool the engines and other systems, before being filtered again and sent back overboard. One of my favorite features of the now retired R/V Melville was a hot tub supplied by water heated by being used to cool the ship’s engines.

Ballast tanks are located in areas of the ship at or below the waterline, and filled with seawater as necessary. For example, more is added as the ship’s fuel supply is used up in order to offset the weight change. And in case of high seas, like those we experienced on the November CalCOFI cruise, roll tanks on the upper deck are used to stabilize the ship. The seawater is treated with filters and UV lights before being brought onboard, and again when it is dumped, to prevent spreading of non-native and potentially invasive species, which has been a huge problem in sensitive environments around the world, most notably the Great Lakes.

Ship schematic showing of the layout two levels down from the main deck, which consists mainly of water tanks for various purposes. 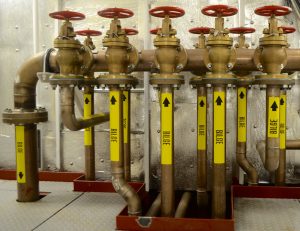 Bilge water pipes run from pumps in the lowest area of
the ship to the oily water separator in the engine room.

Water, oil, and runoff from other ship’s systems collects in the bilge (lowest point on the ship) via drains in the various deck spaces. It is sent through the oily water separator in the engine room to be cleaned before sending it overboard.

I bet you never knew there were so many uses for water onboard an oceanographic vessel! I sure didn’t until Chief Engineer Paul Bueren gave me this tour of R/V Sally Ride‘s engine room.