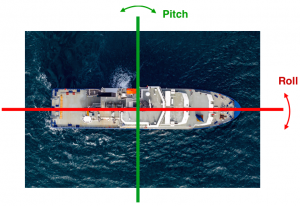 The CalCOFI grid lines are famously “in the trough” which means that the ship heading is perpendicular to the swell, and the ship ends up rolling side to side. Roll is different from pitch (the back and forth motion). I keep these straight by picturing the motions in a plane as opposed to a ship. On a plane, everyone knows what a barrel roll is – a spin beginning with an extreme right or left motion. So for roll, the axis of rotation is a line right down the middle from bow to stern, splitting the ship into left and right halves. Whereas the axis of rotation for pitch splits it into forward and back halves. Bunks onboard are in line with the ship, so roll tips you side to side when you sleep. Which sometimes requires wedging yourself in with blankets or clothes, but I prefer that to shifting head to toe while I sleep – which is what would happen if the bunks were perpendicular. 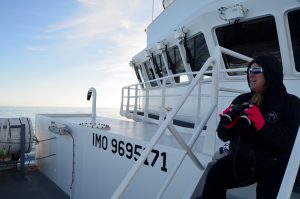 The starboard side of the anti-roll tank has the ship’s identification
number printed on it.

R/V Sally Ride has an anti-roll tank located on the 02 deck, just behind the marine mammal observation deck forward of the bridge. To have a stabilizing effect, it has to be above the waterline, the higher on the ship the better. Seawater is pumped into the tank to a level (in this case 2’10”) so that the rolling period of it will equal that of the ship. The rolling period of the ship is the number of seconds that it takes to return to the same spot. While on the bridge, I counted 8 seconds beginning when the ship was tilted to starboard – it came to center, tilted to port, then center, and back to starboard. This number does not change under differing sea conditions. There are narrow openings within the tank that slow the movement of water down, providing a lag between the ship roll and the roll of the water in the tank. If the water in the tank reaches the starboard side 2 seconds after the ship has reached the starboard tilt in its roll, then the tank has a stabilizing effect. 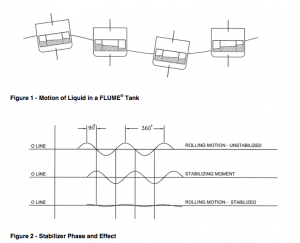 Diagrams from the manual illustrate the motion and effect of the anti-roll tank.

The anti-roll tank on R/V Sally Ride is being used for the first time on this cruise. So now, when you’re sitting in the conference room/library on the 01 deck, it sounds like you’re below the waterline. There’s a soft sloshing noise back and forth above your head. I find it relaxing, though I’ve heard from some of the people with bunks on this level that it’s been hard to get used to.