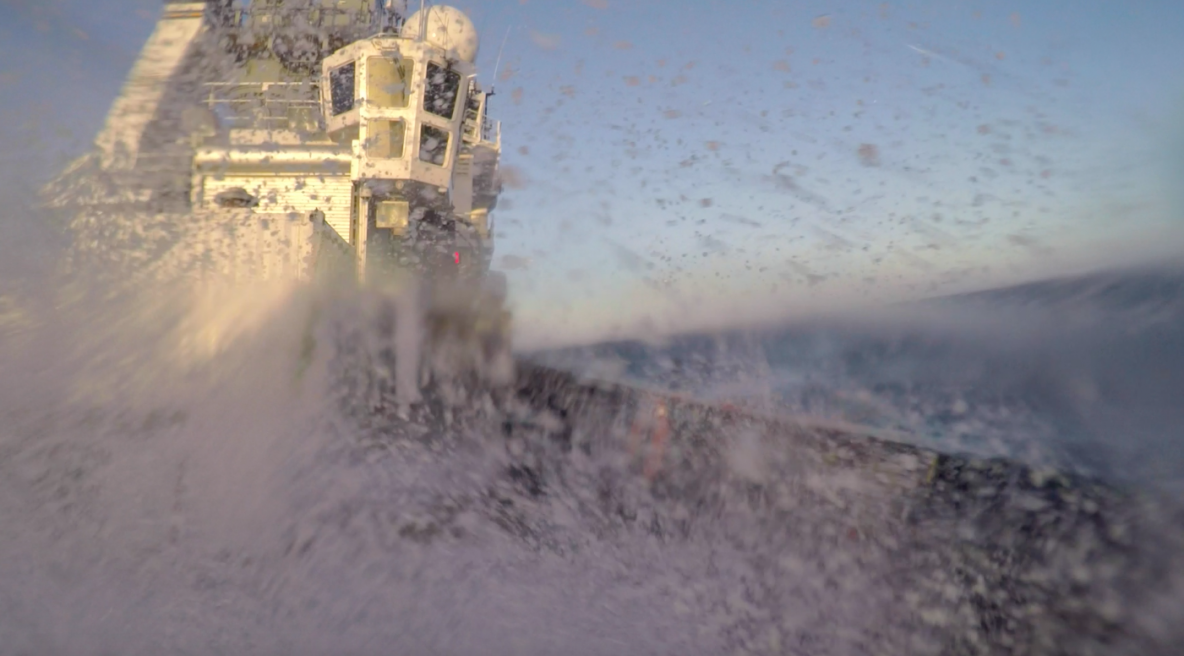 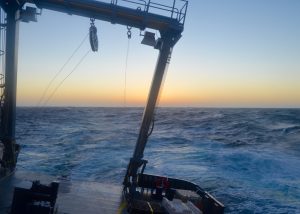 Sunset off the back deck. Note that the horizon is flat in this picture.

Whatever I was planning to do and write about today (plankton) got superseded by the weather that found us. About 200 miles west of LA, 30+ knot winds kicked waves up to 20 feet. 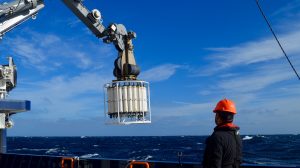 With the starboard crane T-rex arm, the restech Keith
is the only personnel needed on deck to launch the CTD.

R/V Sally Ride‘s dynamic positioning system got to show off, keeping us to within a few meters of the same spot for about an hour while the CTD was deployed. Even that was only possible thanks to the starboard crane and CTD handling system (which I refer to as T-rex arms). On many research vessels, a different system is used to launch and recover the CTD, requiring multiple scientists to be on deck holding tag lines. With more people involved, the operation is dangerous in high seas like those we encountered today. We would not have been able to do science operations at all.

Whereas aboard Sally Ride, the CalCOFI group was able to run their CTD casts as normal. No fisheries nets were deployed due to the wind and waves, which would have punched holes through the fine mesh. Instead of getting underway after the CTD was secured, the ship stayed in position until sampling was complete to keep scientists safe from waves rolling in. Then the watch-stander on the bridge turned back on course, in this case northeast towards the coast of California. We have adjusted our plans somewhat to be closer in to shore tonight and tomorrow in hopes of finding reduced seas. By Thursday night, the winds are forecast to die down, which should mean the resumption of normal operations. 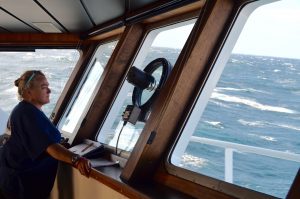 The marine mammal observers are usually on the 01 deck forward of the bridge, but on a day like today they seek shelter instead. Using the Beaufort Scale for sea conditions, they usually move inside at a level 6 (strong breeze, whitecaps common). Today was pushing a level 7 (near gale). Katherine reported not seeing any marine mammals, only a mola mola and some birds.

Even those who usually work inside were affected by the weather. The ship rolled up to 25 degrees side to side, sending anything not secured scattering off tables and across floors. Chairs are the most common culprit, but as this was the ship’s first real weather test, a lot of other gear was sent flying as well. Spices in the kitchen, switches from the electrician’s desk, binders and cans of WD-40 in the lab, apples and pears in the galley.

Jen demonstrates proper technique of
“keep one hand for the ship at all times”
when returning from a coffee run.

Personal time is also affected by weather. Meals are a bit more complicated. The cooks had their work cut out for them trying to prepare food, and nonskid mats have been added to every surface. The dining tables are set up athwartship, so we all slid side to side into each other on heavy rolls, desperately clutching at cups and condiments to keep them from tipping over. Sleep is definitely more difficult under these circumstances. I find that under the normal, slight rocking motion of the ship, I sleep better out at sea than I do at home. But when the rocking is this extreme and every tenth motion nearly tips you out of bed, it’s more difficult to relax. Even just walking down the hallway to get coffee requires situational awareness and, sometimes, taking a few steps on the bottom of the wall in order to keep your balance. Makes for an interesting day. But hey, at least we still got some science done!

View from the office today pic.twitter.com/rCmk1idViP

TBT to the weather we had in November during the fall @calcofi cruise https://t.co/ynH87JQXg6 Video (& woohoos) by Ship's Electrician Manny pic.twitter.com/g4jUkriFip