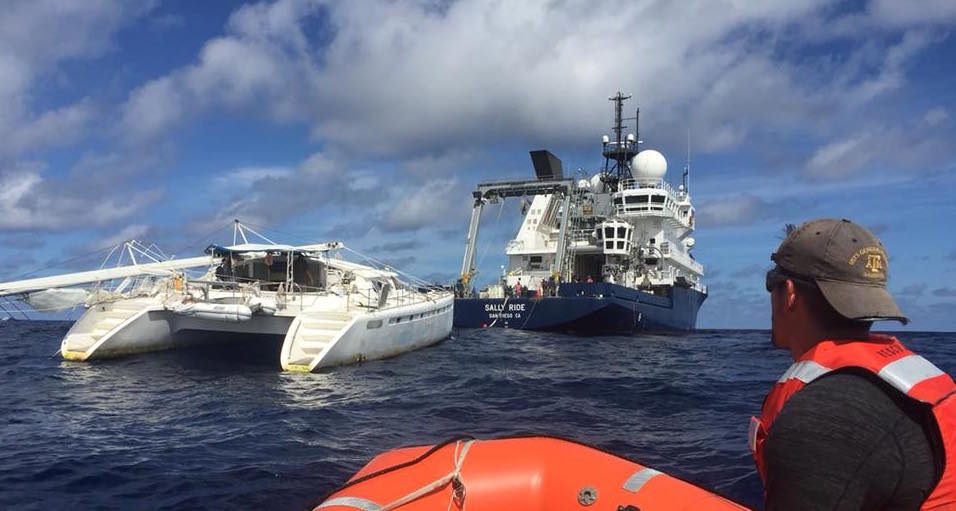 Today was a big day for R/V Sally Ride, as the ship and her crew carried out a Coast Guard-coordinated mission to assist a catamaran in distress.

A report from Third Mate Randy: “We received a call from the Coast Guard two nights ago, asking if we could render assistance [to] a dismasted catamaran out of Papeete, Tahiti, bound for Panama. They were not in immediate distress, but they were running out of fuel and would not make it to the Galapagos, which is the nearest land. At the time we were about 200nm to the southeast, so we finished up the science operation we were engaged in and started steaming to the northwest to intercept, guided along the way by periodic position updates. Upon the rendezvous this afternoon, the deck crew had a towing bridle and an astern-fueling rig set up and ready to go. After about 4 hrs of roasting in the equatorial sun…both vessels were on their respective merry ways, one happy for the help, and the other happy to have helped. The brotherhood of the sea knows no borders.” 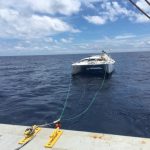 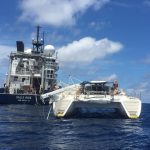 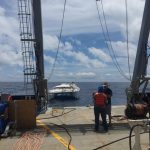 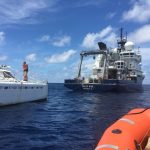 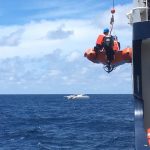 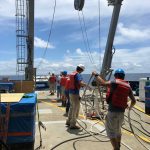 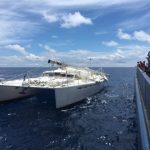 We’re so proud of the mariners onboard the research vessels at Scripps Institution of Oceanography. They are trained to spring into action to keep our researchers safe, and anyone else they can help as well!

Check out more pictures and details from the science party’s blog!

Now back to the regularly scheduled science mission, which has R/V Sally Ride operating near the equator for the first time. Follow the scientists on Twitter and Instagram.

Posted by The San Diego Union-Tribune on Tuesday, May 1, 2018