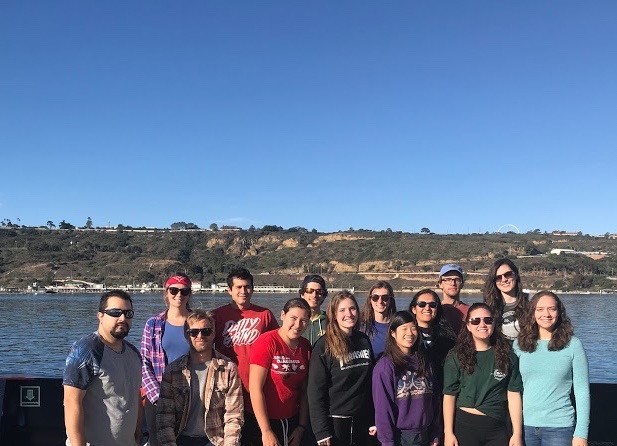 On a recent research cruise aboard R/V Sally Ride, Scripps Institution of Oceanography graduate student Angel Ruacho acted as Chief Scientist. He, along with a team of other students, graduate and undergraduate alike, headed out to collect water and sediment samples along the coast of Southern California. For many of the scientists, it was their first time living and working at sea.

Angel deploys GO-FLO bottles from the back deck. The multi-corer (large frame) is deployed last since it kicks up
particles on the seafloor when it lands.

Cruises like this are made possible through the UC Ship Funds program, which awards ship time to a few groups each year after a peer-reviewed proposal process. The dates Angel was given for his cruise overlapped with the Ocean Sciences conference in Portland, Oregon, where he was due to give a poster. He managed to do both, even though planning a cruise and making a poster are each time consuming jobs. “It was quite the adventure prepping for a cruise and conference at the same time,” he said after the successful completion of both projects.

Nine stations along the coast of Central California were visited, including just off Cambria, Morro Bay, and Vandenberg Air Force Base. The goal was to evaluate the different sites for iron content in the benthic boundary layer (BBL), which is where the water ends and sediment begins on the seafloor. Angel explains the purpose was to “…determine the type of sediments there and if certain locations have a BBL with more particles and thus higher iron. This will help in determining if one of these locations could be a source of iron to the southern CA bight.” 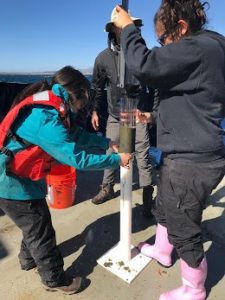 Students process a core sample. Both the sediment
and the captured water will be analyzed.

Angel and the team study such low levels of iron that background levels would interfere, including if they used the usual CTD setup or underway seawater pipes. Instead, they used GO-Flo bottles to collect water samples, which don’t open until they’re below potentially-contaminated surface waters.

As Angel puts it, the “main attraction of the cruise” was the trace metal team, who set up a “bubble” in the ship’s wet lab. This consists of plastic sheeting taped together, enclosing a work space, with positive pressure in order to keep out ambient particles. Check out this post from last year for more on bubbles. They also used the regular ship’s CTD and the multi-corer, which collects sediment samples. More on how that works from this previous post.

Many people spotted R/V Sally Ride working offshore along the central coast, sharing pictures on social media. It was a successful cruise, and even returned to port a few hours ahead of schedule, having completed all the science objectives.

Many thanks to Angel Ruacho, Kayleen Fulton, Sara Rivera, and Matthew Pendergraft for pictures.

That's dedication (and the life of a grad student)! Chief Scientist Angel loaded the ship on Saturday, presented a poster @AGU_OS meeting in Portland on Tuesday, then flew back in time for cruise departure Wednesday morning. More info and pictures from the cruise coming soon! pic.twitter.com/qu6h1QY0XB