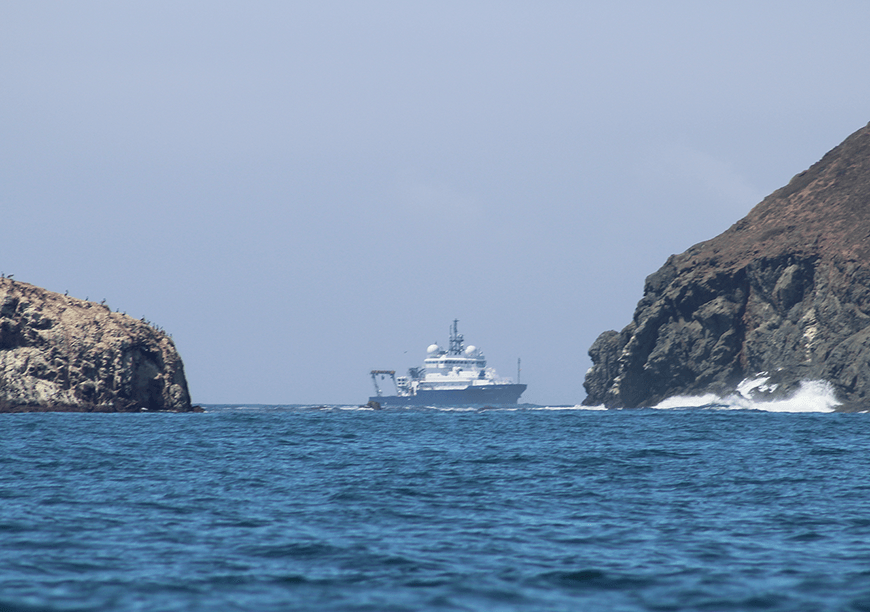 The current project on R/V Sally Ride has made SIO’s photo of the week! I’m currently assigned to a different research vessel in the Southern Atlantic Ocean working and writing for the SOCCOM project, so it’s hard to keep in touch with the goings on of the ship. Apologies for the lack of regular posts. There are ongoing posts and pictures from the ships and planes involved here.

Based on a report from UNOLS master technician Drew Cole, who is working as a restech, 42 moorings were deployed from Sally Ride in a matter of days. Now underway are surveys using the ship’s sonars and a few additional ones that the science party has mounted in various ways. This includes an ADCP on a pole and a profiling instrument on a heavy-duty fishing reel that measures turbulence, among other properties.

Scientists ready for a night-time deployment from the ship’s stern.

“The R/V Sally Ride is well into week 2 of our observations of the dynamics of the inner continental shelf just south of Pismo Beach. We have been dividing our time between two distinct inner shelf environments. One location, Oceano Beach, is a straight sandy-bottom coastline, and the other location, Point Sal, is a complex rocky headland with outcrops, promontories, and a large pocket beach. These location choices help our groups to dis-entangle the important dynamical processes associated with beach inner shelf interactions such as rip currents and surface waves, internal waves which are like surface waves except they exist within the ocean water column, wind driven circulation such as upwelling and down welling, ocean eddies which represent the “weather’’ of the ocean, and topographic effects.

“The experimental effort would not be possible without an extremely capable and collegial group of scientists from SIO, NPS, OSU, and UW. With over 170 moorings measuring temperature, ocean currents and mixing, 3 large vessels (R/V Sally Ride, Oceanus, and Sproul), 4 small boats R/V Kalipi, Sally Anne, Sounder and Sand Crab), 2 airplanes from SIO and UW, and coastal radar supplied by SIO and OSU, there is a dizzying amount of equipment involved in this work.

“Some highlights of the work so far include wonderful observations of energetic bore-like and short pulse internal waves with beautiful turbulent wakes and associated biological activity, headland wakes and eddies and their associated complex re-circulation patters, strong upwelling and eddy activity due to a major wind event, and observations of vorticity (circular water motions) from 5 vessel synchronized surveys along the 10-50m isobaths.

“Our delightful experience of the inner shelf is that every day is different and the various dynamical processes at work, tides, wind, waves, turbulence, and topographic effects, evolve as a complex, but understandable pattern that has been a joy to observe.’’

Blog posts and pictures from the scientists onboard are also here.