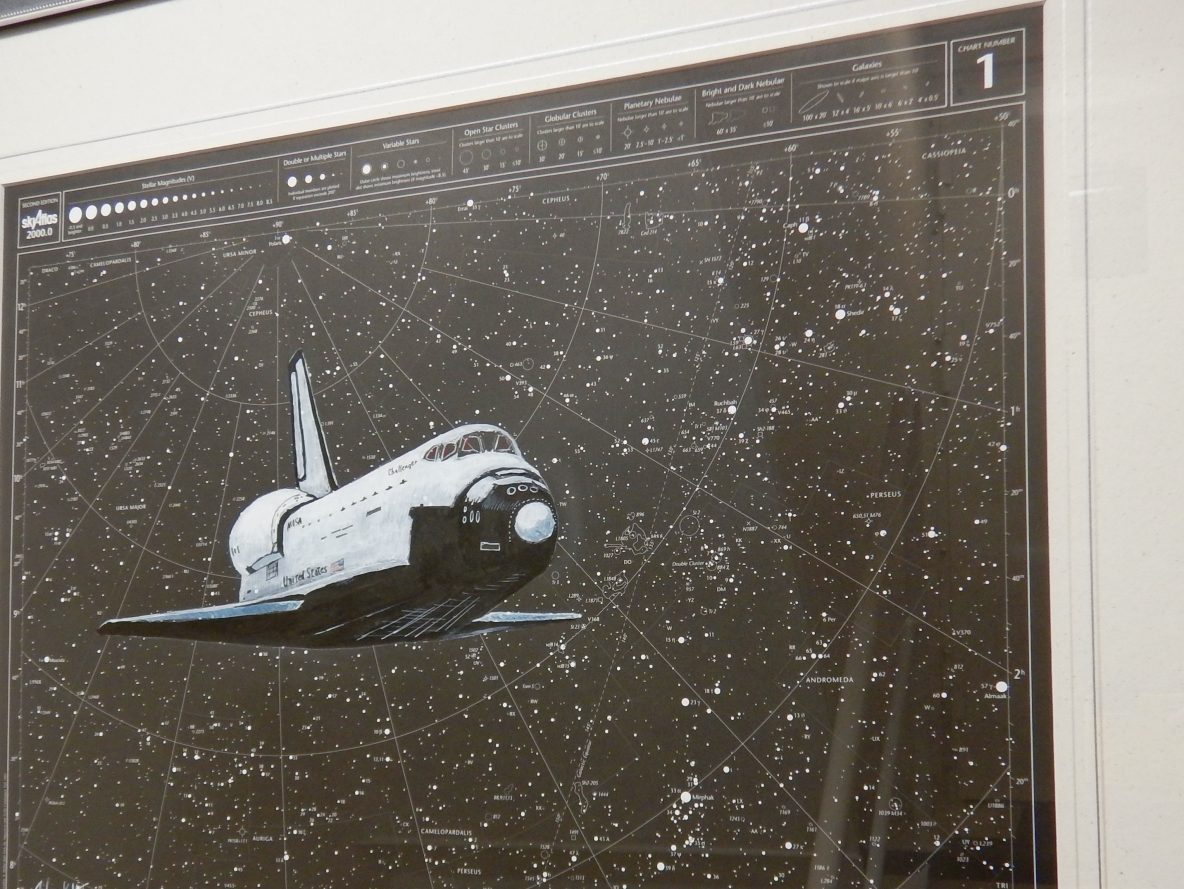 Living and working aboard R/V Sally Ride involves a lot of transiting through hallways and stairwells to get between labs, staterooms, the lounge, the galley, etc. One could be forgiven for not noticing the beautiful piece of artwork in the main stairwell, but it would be a shame. Commissioned by Sally Ride herself, artist Adam Koltz created a masterpiece in his style of drawing ships over nautical charts and, in this case, a sky chart. Tam O’Shaughnessy, Sally’s partner and the ship’s sponsor, donated it to the ship and it makes a gorgeous addition.

The artwork on display in the stairwell of R/V Sally Ride. By Adam Koltz. Gifted by Tam O’Shaughnessy.

Tam recently told the story to UCTV for an upcoming special about the new ship. As she explains, “[Sally] had this idea and so she talked to the artist, Adam Koltz, and said, ‘I’m Sally Ride.’ And he knew who she was once he heard the name and so they came up with this plan. The Space Shuttle Challenger was named after the H.M.S., (Her Majesty’s Ship) Challenger. And it turns out that the H.M.S. Challenger actually did the first study [where] scientists were aboard. They did the first study of the world’s oceans so it couldn’t be more appropriate for the R/V Sally Ride. One of my duties being the ship’s sponsor was to give a gift to the ship and when that came to mind it’s like, ‘What could be more perfect?'”

Indeed it is a wonderful parallel that the shuttle to carry Sally Ride to space on her historic flight in 1983, and again the following year, was named for a sailing vessel that undertook the first global marine expedition. From 1872-1876, Challenger travelled 68,890 nautical miles. Guns and other Naval equipment were traded for labs and extra bunks, so that oceanographers and naturalists could do their work aboard. One of the tasks was sounding, which determines the depth of the ocean using little more than a weight on the end of a rope. The deepest known area in the Mariana Trench is called the Challenger Deep, and James Cameron’s vehicle that reached it is Deepsea Challenger, both named after the ship who’s crew first made those readings. In case you’re wondering (I was), Challenger measured a depth of 8,184 meters in 1875, multibeam data now says it’s 10,984 at its deepest, and Deepsea Challenger landed on the eafloor at 10,898 meters.