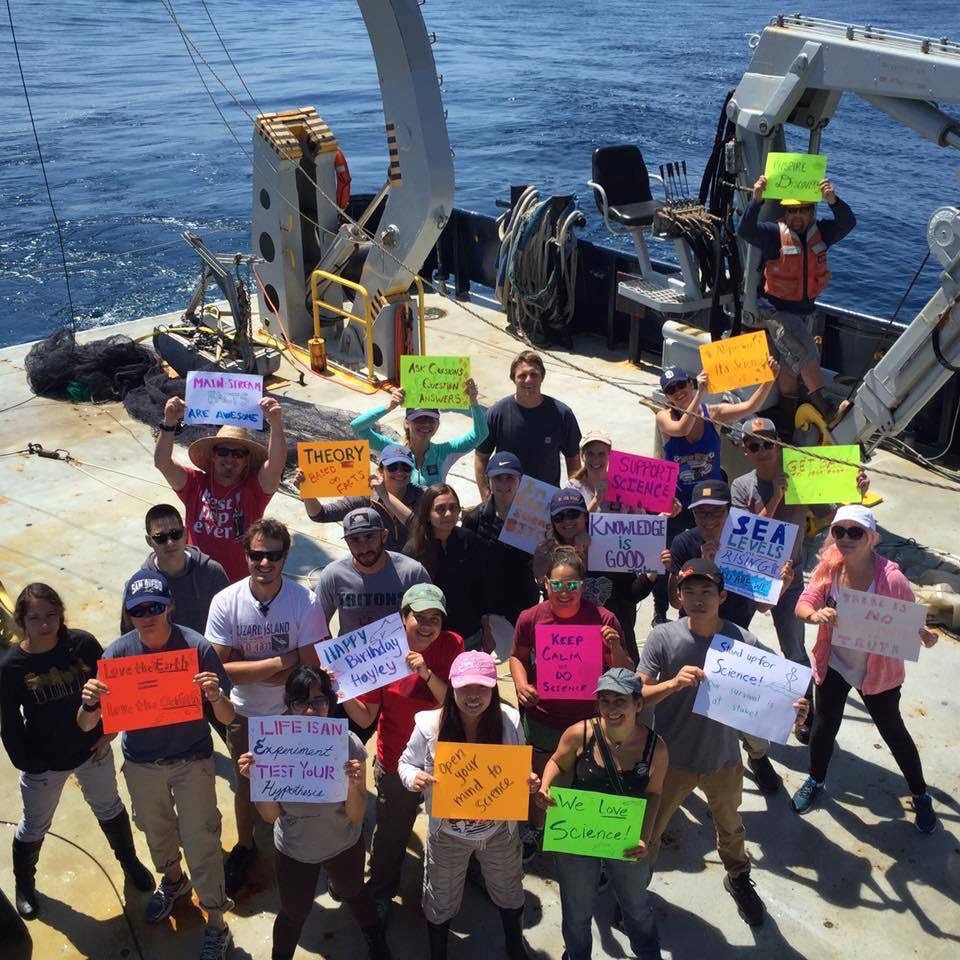 “Science is essential for our community, for our world, for our economy. There is a distrust in the objectivity of scientific advice, there’s also a lack of understanding of why it’s useful. This rocks us to our core, those of us who understand and appreciate science. We can’t deny that something fundamental has just changed, and we can’t sit down in our corners and say nothing about it. This is not a partisan activity.”    – Dr. Lynne Talley at the San Diego March for Science

At any time, there are Scripps scientists on research assignments all around the world. Saturday, April 22nd was Earth Day, and around the world millions of people participated in the March for Science. Fifth year graduate student, Natalya Gallo, wanted to make sure she marched in solidarity despite being out at sea. Just off the coast of San Diego, R/V Sproul was out for a day trip for a class where undergrads get to see what research aboard a Scripps ship entails. While transiting out to sea for a day of CTD casts, net tows, and sample collection, Natalya broke out supplies to make posters and the whole group gathered on the back deck for a photo op. As she explains, “Participating in the March (in some way) was really important to me, both as a scientist and a public citizen. Making posters with the undergraduate students provided an opportunity to talk about the role of scientists in society, how scientists interact with the public and policy-makers, and share my thoughts about the value of scientific engagement across all sectors of our society. With the many critical problems our society currently faces (climate change, fisheries sustainability, pollution, antibiotic resistance, just to name a few) it is essential that the scientific method is understood, respected, and valued, and that scientists play a central role in these conversations.”

Supporters of science gather in downtown San Diego before the March for Science.
Photo thanks to Scripps Oceanography Communications office.

Like Natalya, it’s important to me that everyone knows that they use and benefit from science every day. Do you check the weather forecast on you phone? That info comes from satellites and weather stations. The phone itself is a feat of engineering. The data connection and WiFi wouldn’t be possible without a scientific understanding of radio waves. This is just one example, there are countless others that maybe we don’t think of as being “science” – the eradication of diseases, electricity, brewing, baking – these are all the scientific method at work.

At the San Diego event, Scripps Institution of Oceanography professors Ralph Keeling and Lynne Talley spoke to the crowd. Dr. Keeling studies carbon dioxide levels in Earth’s atmosphere and is the “keeper” of the Keeling Curve, which has tracked increasing CO2 levels since 1958. Begun by his father, Dr. Charles Keeling, continuous measurements are taken at Mauna Loa observatory in Hawaii and show a drastically accelerating increase beginning when humans began to burn fossil fuels.

In Lynne’s speech, she mentioned her faith, and growing up in a family
of engineers, teachers, and librarians. Photo by postdoc Isa Rosso.

Dr. Lynne Talley is an elected official of the AGU (American Geophysical Union) Ocean Sciences division and the AAAS (American Association for the Advancement of Science), both well-respected non-profits that promote cooperative research. In her speech, she got the crowd going with the chant: What do we want? Science! When do we want it? After peer review! Which made my nerdy heart happy.

I have been to sea with Lynne as the Chief Scientist, traveling for six weeks studying seawater properties from the Antarctic ice edge up to the tropics. She is also a Lead Investigator of the SOCCOM (Southern Ocean Carbon and Climate Observations and Monitoring) project, which deploys floats carrying sensors to study various ocean properties. The robotic float sends itself on casts down through the water column collecting data, and then it beams it back to land when it surfaces. Click here for a blog post I wrote when sailing on a SOCCOM cruise. Lynne says that she knows speeches from scientists “…are often too dry, give way too many facts, and don’t let emotion or their religious faith and principles creep in.” So instead, she made sure to cover “…what we are as scientists and what I believe, what do we know about the climate, what do we demand, and what can we do.” In addition to her participation in the march, Lynne spoke with KPBS about the importance of science – you can listen to that here.

The March for Science aboard R/V Sproul.
Photo by Chris Welton. Header photo by Brice Semmens.

Scientists themselves don’t have all the answers, it’s a constant process of having ideas, testing them, and learning. The purpose of every science project is to better understand the world around us, and that is a worthy goal. And as Lynne said in her speech, “When I turn on that light switch, when I pick up my phone – that is not a political act.”

I enjoy bringing the science from R/V Sally Ride to you so that everyone can see the dedicated people behind the expeditions. Scripps Institution of Oceanography is full of people who love to explore and learn and share what they find.

Thanks for your support!

Check out this article about why UCSD staff, faculty, and students participated in the March for Science.