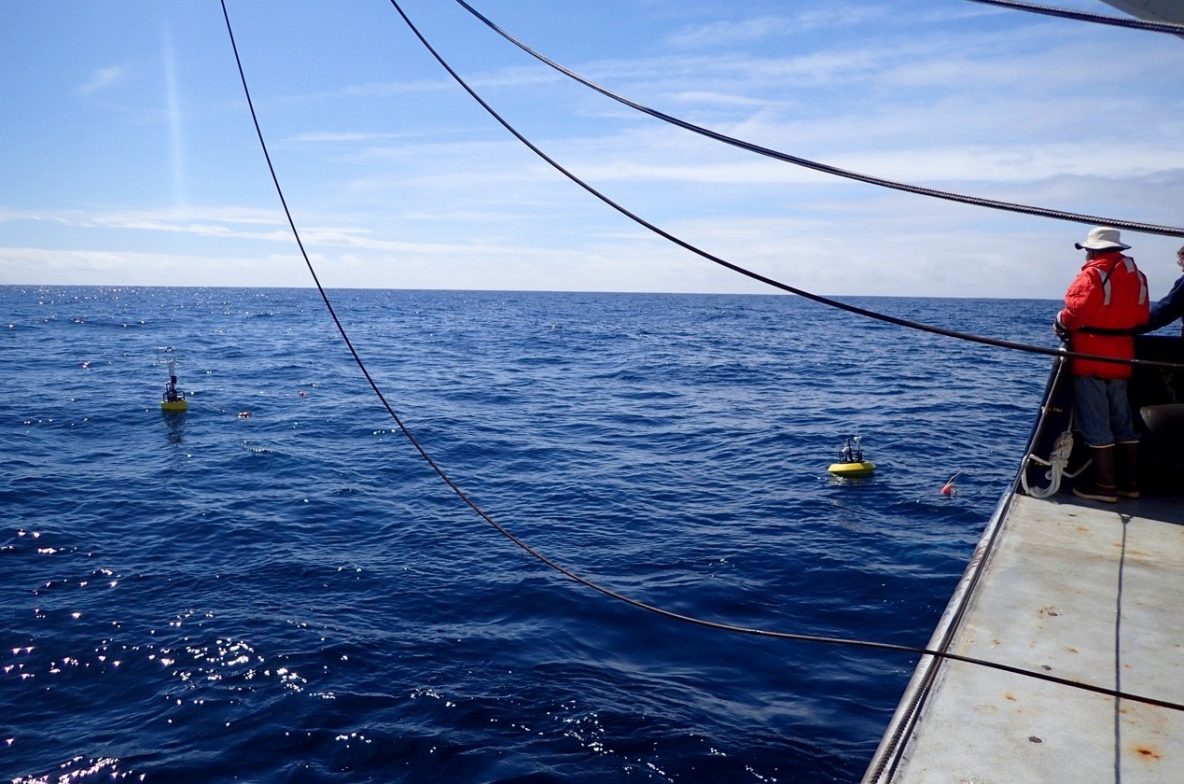 R/V Sally Ride is out at sea studying surface waves and currents as part of a collaboration between scientists at Scripps Institution of Oceanography and the University of Washington (UW). 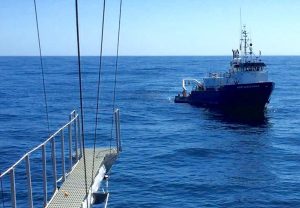 R/V Sproul as photographed from R/P FLIP during their collaborative operations
with R/V Sally Ride (not pictured). Photo by Randy Christian.

Other members of the Scripps fleet are in on the action as well, with R/V Sproul and R/P FLIP operating in the same area. Dr. Jim Thomson of UW, one of the investigators on this project, sums up the coordinated effort, “We want to know how winds and waves create turbulence in the ocean. We are looking for patterns in the turbulence, and that requires lots of instruments distributed spatially.”

R/V Robert Gordon Sproul is the smallest vessel in the fleet, at 125 feet long with a crew of five (compared to Sally Ride’s 238 feet and crew of 20), and generally keeps to the waters off Southern California. The ship’s first task was to assist with mooring the research platform FLIP in place (more on this in another post). Then science operations got underway, with autonomous floats built or modified by engineers at the Applied Physics Laboratory at UW being deployed from the ship.

Dr. Eric D’Asaro is chief scientist onboard, and the focus of study is on turbulence, the movement of the water itself. At the air-sea interface in the the upper 50 meters of the ocean, factors include the affects of temperature, wind, waves, currents, and mixing. While the FLIP and the instruments deployed from it remain in one place, the Sproul is deploying drifters, instruments without propulsion, that move with the water. 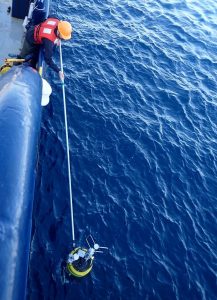 Scientists use a pole with a hook to snag
the float when it’s ready to be recovered.
Photo by Jeremiah Brower.

Dr. Tom Sanford describes the difference this way – “Consider a person measuring wind and temperature from a hot-air balloon. This is very different from what an observer sees on a fixed tower. For example, the former (hot air balloon) is more likely to observe turbulence without the confounding forces of the wind.”

All of the floats on Sproul have a metal housing that holds batteries and electronics, with the usual temperature and salinity sensors mounted to it. Some of the floats sink into the water column to study processes over varying depths, and then resurface. Of these, one group has an instrument that measures the electric field due to the water’s motion through the Earth’s magnetic field and from this measures the water velocity. Another is able to be controlled on a fine scale, so its position in the water column can be dictated in order to profile currents using a mounted sonar. Other floats do not sink, and focus on measurements of wind and surface waves, along with the temperature of both the air and the sea.

Jeremiah, the restech in charge of all deck operations onboard Sproul, notes that the ship “is an ideal platform to launch drifters from because its back deck is lower to the water, allowing scientists and techs to simply hand 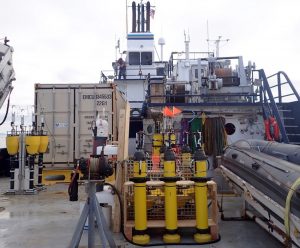 The floats (in high visibility yellow) are stored on the back deck of the Sproul.
Photo by restech Jeremiah Brower.

deploy many of the instruments.” Being a smaller ship, the higher seas associated with being outside the Channel Islands more often affects work onboard Sproul than it does for Sally Ride. A few times since they’ve been out, the outside decks have had to be secured, meaning everyone has to stay inside and no science operations can take place. The ship has even moved away from the working area in order to shelter behind Catalina Island, returning as soon as conditions allow. Each of the members of the Scripps fleet has its own capabilities, and this collaboration highlights how they are different but can all work in partnership to contribute to scientific goals.